The first keeper of the original Tate Gallery, Sir Charles Holroyd was Director of the National Gallery during the late Edwardian era and the start of the First World War.

Holroyd was born on 9 April 1861 in Potternewton near Leeds. He was educated at Leeds Grammar School and at the Yorkshire College of Science before deciding to change direction in 1880, when he enrolled at the Slade School of Fine Art in London. There he studied under the artist Alphonse Legros and later taught at the school while also pursuing an artistic career.

In 1897 Holroyd was appointed the first Keeper of the National Gallery of British Art at Millbank (now Tate Britain). In June 1906 he became Director of the National Gallery, a position which he held until June 1916 when he resigned owing to ill health. The following year, on 17 November 1917, Holroyd died at his home in Surrey. 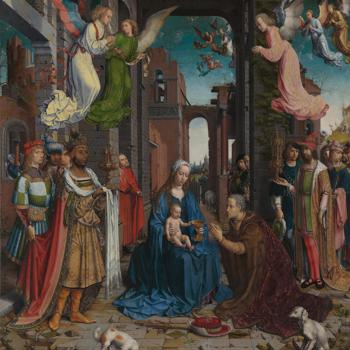 The Adoration of the Kings
Jan Gossaert (Jean Gossart)
This large altarpiece is crammed with peasants, animals, angels and richly dressed kings and courtiers, come to worship the infant Christ, who sits on his mother’s lap in a palatial but ruined building.Jean Gossart has signed the painting on the hat of Balthasar, the king on the left, and on the...
Room 14
Scenes of the Virgin; The Trinity; The Crucifixion
Barnaba da Modena
It is unusual to see these four images grouped together like this. This arrangement and the evidence of hinges at the panel’s right edge suggest that it was once part of a larger work made up two or more connected panels.Clockwise from top left, we see the coronation of the Virgin (when Christ cr...
Room 51
The Dead Christ Mourned ('The Three Maries')
Annibale Carracci
This is perhaps the most poignant image in the National Gallery’s collection of the pietà – the lamentation over the dead Christ following his crucifixion. It was a subject to which Annibale Carracci returned frequently, especially during the last decade of his life.Here, the limp and lifeless bo...
Room 37 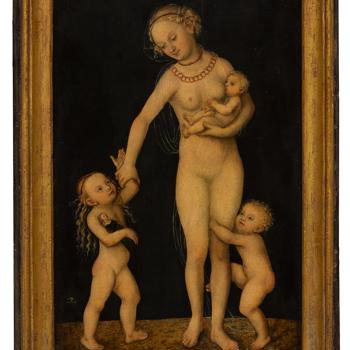 Charity
Lucas Cranach the Elder
In 1 Corinthians 13, Saint Paul discusses three traits that would become known as the theological virtues: faith, hope and charity. He believed that charity, an expression of the love of God and of one’s neighbour, was the most important. Here, the inscription ‘CHARITAS’ at the top of the picture...
Room 16
The Crucifixion: Central Panel
Master of Delft
This painting is so crowded it takes a while to understand everything that is happening, but the nuns for whom it was probably made must have had plenty of time to examine the details. It is the central panel of a triptych (a painting made up of three parts) painted around 1510, probably for the...
Not on display
The Procession to Calvary
Raphael
This is one of three scenes from the predella of Raphael’s Colonna Altarpiece painted for the convent of S. Antonio da Padua in Perugia. The Procession to Calvary was the central scene of the predella, positioned below the main panel of the altarpiece.Christ looks to us as he carries the Cross, h...
Room 1
The Marquise de Seignelay and Two of her Sons
Pierre Mignard
In this portrait, the recently widowed Catherine-Thérèse, Marquise de Seignelay (1662–1699) and two of her five sons are shown as characters from Greek and Roman mythology. The Marquise is probably meant to be the sea goddess Thetis, but could also be interpreted as Venus, the goddess of love, wi...
Room 29
Portrait of Thomas Howard, 2nd Earl of Arundel
Peter Paul Rubens
Thomas Howard (1585–1646), 2nd Earl of Arundel and Surrey, was a prominent political figure and a distinguished patron and connoisseur of the arts. Rubens met him on his visit to England in 1629/30, when Arundel was 44 or 45 years old. This portrait isn’t dated, but may well have been made during...
Room 18
The Adoration of the Kings
Bramantino
Not on display
Christ Nailed to the Cross
Gerard David
Christ is stretched on the cross on which he is to be crucified – he looks straight at us to invite our sympathy. At his feet, two soldiers haul on ropes to pull his legs straight as another hammers an iron nail into his feet. A fourth knocks a nail into his right hand.His pale skin and nakedness...
Not on display
The Virgin and Child
Masaccio
This was the central panel of a large altarpiece made for the church of Santa Maria del Carmine in Pisa. The Virgin’s sturdy form, which looks similar to contemporary Florentine sculpture, casts a shadow against the carved throne. Christ’s body seems fleshy and three-dimensional; Masaccio has don...
Room 60
Praying Man with a Long Beard
Moretto da Brescia
This man may be a member of the important Averoldi family from Brescia, who once owned the portrait. He wears a soft red wool tunic and coat or cloak lined with fox fur.It is very unusual for a three-quarter-length portrait at this date to have a background consisting entirely of sky. The man’s p...
Not on display
Portrait of Leonardo Salvagno (?)
Giovanni Battista Moroni
A soberly dressed man turns to look at us, his arm leaning on a large red book with gilded corner pieces and a central boss. Although the Latinised name ‘Leonardus Salvaneus’ was added to the portrait later, this may be a true record of his identity.The inscription on the ornate book translates a...
Not on display
Portrait of a Man with Raised Eyebrows
Giovanni Battista Moroni
An unidentified man regards us with a look of affable irony, his eyebrows raised. His chain mail sleeves and tunic would have been worn beneath plate armour, suggesting that he engages in some form of military activity. Similar costume is worn by noblemen in other portraits by Moroni.The sitter’s...
Not on display
Bust Portrait of a Young Man with an Inscription
Giovanni Battista Moroni
This dark-haired man with his striking ginger beard is said to be an ancestor of Count Lupi of Bergamo. The picture is typical of Moroni’s bust-length portraits of the 1560s. The sitter’s body, truncated by a marble parapet, is turned at a sharp angle to us and his eyes meet ours with a direct, a...
Not on display