Peter Paul Rubens, the most celebrated Flemish painter of Western art, was actually born in Germany to parents who had fled Antwerp because of their Protestant beliefs. In 1587 his family returned to Antwerp, where Rubens eventually converted to Catholicism. He had an enormously successful career as a learned painter of religious works expressing the Catholic reaction to the Reformation (the Counter-Reformation). Rubens was equally successful as a painter to the courts of Europe, including England, and on occasion worked as a diplomat. The ingenuity of his compositions, brilliant use of colour and his superb draughtsmanship made Rubens eminently suited to the task of dazzling audiences with the message of the Counter-Reformation. But he was equally determined to convey the stories and morals of Classical Antiquity.

Rubens was by far the most successful painter of his day. Collectors flocked to buy his works, dazzled by his powers of invention. He could only meet this demand by employing many assistants, like the Italian Renaissance painters he admired. Patrons understood that a ‘Rubens’ would be designed by the artist, but might to some extent be painted by his pupils.

A Lion Hunt
Peter Paul Rubens
A group of men out on a lion hunt are now being hunted themselves. In this brown monochrome sketch, Rubens – famously an accomplished painter of horses – has masterfully captured the movement of the rearing horses and thrusting spears, and the terrified faces of the men as they struggle to fend o...
Room 18
A Roman Triumph
Peter Paul Rubens
A crowd of people relax on a grass bank, enjoying the spectacle of a flamboyant procession celebrating the return of a great general and his army. The columns and alcoves of classical Roman buildings tower over them. Below, trumpeters and pipers blow their instruments and animals are led to the s...
Room 18
Kings Clothar and Dagobert dispute with a Herald
Peter Paul Rubens
Rubens made this oil sketch, along with two others, in preparation for an altarpiece commissioned for St Bavo’s Cathedral, Ghent. The central panel depicts Saint Bavo, a Roman soldier who left the military for the Christian Church, being received as a monk. This scene, in which King Clothar and h...
Room 18
Minerva protects Pax from Mars ('Peace and War')
Peter Paul Rubens
This picture was made for King Charles I of England and given to him by Rubens, who was acting as an envoy of Philip IV of Spain, in 1630. The two countries had been at war for five years and both sides were keen for a peace deal. The painting is an allegory, the figures representing different vi...
Room 18
Portrait of Thomas Howard, 2nd Earl of Arundel
Peter Paul Rubens
Thomas Howard (1585–1646), 2nd Earl of Arundel and Surrey, was a prominent political figure and a distinguished patron and connoisseur of the arts. Rubens met him on his visit to England in 1629/30, when Arundel was 44 or 45 years old. This portrait isn’t dated, but may well have been made during...
Room 18
Saint Bavo is received by Saints Amand and Floribert
Peter Paul Rubens
This scene makes up the central panel of an altarpiece Rubens made for St Bavo’s Cathedral, Ghent; this painting is a preliminary sketch for the work. Saints Amand and Floribert receive Saint Bavo, a former Roman soldier, on the steps of St Peter’s Church, also in Ghent.A cleric holds the black h...
Room 18
Samson and Delilah
Peter Paul Rubens
Peter Paul Rubens’s Samson and Delilah portrays a tragedy of love and betrayal. Delilah, Samson’s lover, has been bribed to discover the secret of Samson’s supernatural strength. Rubens shows the moment when Delilah tells an accomplice to cut his hair, leaving him powerless. Outside, soldiers wai...
Room 18
The Apotheosis of the Duke of Buckingham
Peter Paul Rubens
In this exuberant picture, Rubens seems to suggest that apotheosis – a person being elevated to divine status – is not a wholly majestic and dignified affair, as it is presented in many other contemporary paintings. Here, it seems that any great man taken to heaven and granted immortality by the...
Room 18
The Birth of Venus
Peter Paul Rubens
This design for a silver basin depicts a number of episodes from classical myth. Venus, the goddess of love, steps out of the giant shell from which, according to Hesiod’s Theogony and the Homeric Hymns, she was born. The birth of Venus from the sea is a playful subject for a basin design: as the...
Room 18
The Brazen Serpent
Peter Paul Rubens
Moses stands on the left, his hand raised as he beckons people to gaze upon the bronze serpent coiled around the pole held by Eleazar, a priest. The scene is taken from the Old Testament: God had sent a plague of ‘fiery serpents’ to punish the Israelites for their sinfulness and lack of faith (Nu...
Room 18 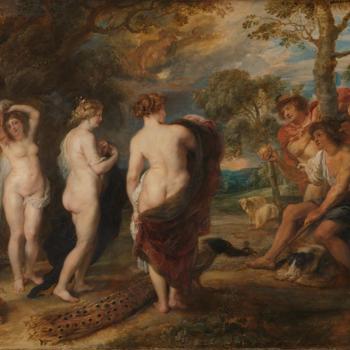 The Judgement of Paris
Peter Paul Rubens
Eris, goddess of discord, was the only immortal not invited to an important wedding. Furious at being left out, she threw a golden apple inscribed ‘To the Fairest’ among all the goddesses at the feast. Three claimed the title – Minerva, Juno and Venus. Jupiter, chief of the gods, declared that Pa...
Room 18
The Judgement of Paris
Peter Paul Rubens
This painting depicts a critical moment in classical mythology. The man on the left with his back to us is Paris, who had been raised as a shepherd but was actually a prince of Troy. He has been asked to judge a beauty contest between the goddesses Venus, Juno and Minerva, and to award a golden a...
Room 18
The Miraculous Draught of Fishes
Peter Paul Rubens
According to the Gospel of Luke (5: 1–11), Christ one day approached two fishing boats on the Sea of Galilee. After boarding one and preaching from it, he told the fishermen to cast their nets. Although they had worked all night and caught nothing, the fisherman agreed; when they hauled the nets...
Room 18
The Rape of the Sabine Women
Peter Paul Rubens
The legend of the abduction of the Sabine women by the Romans is described by several classical writers. While accounts vary, key details are consistent: Romulus, founder and then king of Rome, had built an impressive city, but there was a shortage of women. He invited the Sabines, who lived in t...
Room 18
Three Female Witnesses
Peter Paul Rubens
This is an oil sketch Rubens made in preparation for an altarpiece for St Bavo’s Cathedral, Ghent; it shows the scene that appeared on the left panel. The two women wearing gold crowns are Saints Gertrude and Begga, the sisters of Saint Bavo (who appears in the central panel). Saint Bavo was a Ro...
Room 18