This elegant young woman is Christina of Denmark, the youngest daughter of King Christian of Denmark. In 1538, King Henry VIII of England was looking for a fourth wife, after the death of Jane Seymour the previous year. As Henry’s official court artist, Holbein was sent to Brussels to capture the 16-year-old Christina’s likeness.

It’s recorded that Holbein’s sitting with Christina only lasted from 1 to 4 p.m. on 12 March 1538. This is when he made a series of sketches to use as the basis for the painted portrait. The image apparently pleased Henry so much that he was reported to be ‘in better humour than he ever was, making musicians play on their instruments all day long'. Although their marriage negotiations failed, Henry kept Christina’s portrait until his death in 1547.

This elegant young woman is Christina of Denmark, the youngest daughter of King Christian of Denmark. In 1538, King Henry VIII of England was looking for a fourth wife, after the death of Jane Seymour in October 1537. As Henry’s official court artist, Holbein was responsible for painting portraits of the King’s potential matches as well as his brides. In 1538 he was sent to Brussels to capture the 16-year-old Christina’s likeness.

The full-length format reflects the preferences of a previous monarch, Henry VI: in 1446 he specified that portraits of potential brides should be in this format, to show both their ‘countenance and their stature’. Christina was, according to contemporary commentators, tall for her age. She is depicted here in sombre mourning dress in honour of her husband, the Duke of Milan, who had died in 1535: she wears a black fur-lined satin gown over a black dress, and a black cap covers her hair. Her face and hands appear pale against the deep black that shrouds the rest of her body, but according to her contemporaries she was ‘Very pure, fair of colour she is not, but a mervelous good brownishe face she hathe, with fair red lippes, and ruddy chekes.’

It is recorded that Holbein’s sitting with Christina only lasted from 1 to 4 p.m. on 12 March. In this time, Holbein would have made sketches – to use as the basis for the painted portrait (the drawing for her face does not survive). He would have then transferred the drawing to panel using the same technique as he did for his portrait of Anne Lovell. Henry received an image from the artist a few days after the sitting, probably just a drawing at that stage. He was apparently so pleased with it that he was reported to be ‘in better humour than he ever was, making musicians play on their instruments all day long’. Although their marriage negotiations failed, Henry kept Christina’s portrait until his death in 1547.

The young woman’s calm, imposing presence is enhanced by the symmetry of her features and her body, which is constructed geometrically giving her a serene demeanour. Her chin forms the lowest point of a small inverted triangle placed upon another, outlined by the shape of her arms and hands as they clasp her soft gloves. Both balance upon the base of an upright triangle formed by the train of her dress, which anchors her to the ground. Holbein has left little space around her figure, drawing her closer to the viewer and heightening the intimacy of the image.

The painting is a fine example of Holbein’s ability to create the illusion of the sitter’s real presence, achieved in part by his brilliant facility at evoking texture. The black satin of Christina’s gown has a silver sheen where it catches the light, emphasising its smoothness and coolness. The clear light causes her body to cast a dark shadow against the background, asserting her physical presence as well as suggesting the space between her and the wall behind; as with sculpture, Holbein was inviting Henry to imagine walking around her. The source of the vertical shadow to the right is ambiguous, but is perhaps intended to suggests other objects nearby, in Christina’s space.

The picture eventually passed into the collection of the Dukes of Arundel. In 1880 the fifteenth Duke loaned the portrait to the National Gallery, and it became one of its most admired pictures. In the early twentieth century the Duke proposed to sell the portrait, but the sum requested was beyond the Gallery’s finances at the time and there was a risk that it would be sold abroad, specifically to the wealthy American industrialist and collector Henry Clay Frick. The public distress and outrage at the prospect of losing the painting was reflected in numerous articles in the press: as a potential bride of an English king, painted by the most celebrated artist at the English court, Christina’s portrait was regarded as part of the nation’s cultural heritage. The picture was finally purchased for the nation thanks to a gift from a donor (who, at her request, remains anonymous).

Christina of Denmark, Duchess of Milan 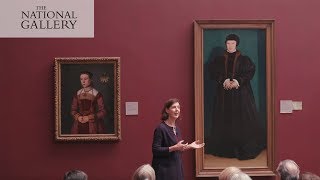 Learn how Hans Holbein the Younger's portrait of the 16-year-old widow Christina of Denmark piqued Henry VIII's interest when he was looking for a new bride and the surprising story of how the work came into our collection with Susan Foister, our Dep...