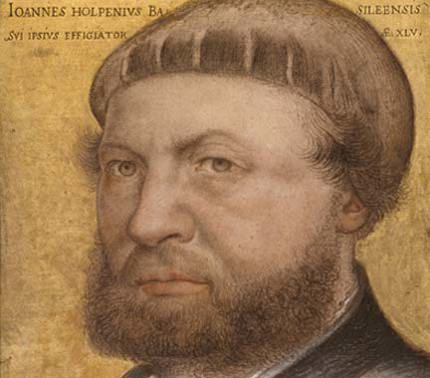 Holbein was one of the most accomplished portraitists of the 16th century. He spent two periods of his life in England (1526-8 and 1532-43), portraying the nobility of the Tudor court. Holbein's famous portrait of Henry VIII (London, National Portrait Gallery) dates from the second of these periods. 'The Ambassadors', also from this period, depicts two visitors to the court of Henry VIII. 'Christina of Denmark' is a portrait of a potential wife for the king.

Holbein was born in Augsburg in southern Germany in the winter of 1497-8. He was taught by his father, Hans Holbein the Elder. He became a member of the Basel artists' guild in 1519. He travelled a great deal, and is recorded in Lucerne, northern Italy and France. In these years he produced woodcuts and fresco designs as well as panel paintings. With the spread of the Reformation in Northern Europe the demand for religious images declined and artists sought alternative work. Holbein first travelled to England in 1526 with a recommendation to Thomas More from the scholar Erasmus. In 1532 he settled in England, dying of the plague in London in 1543.

Holbein was a highly versatile and technically accomplished artist who worked in different media. He also designed jewellery and metalwork.

Paintings by Hans Holbein the Younger

A Lady with a Squirrel and a Starling (Anne Lovell?)
Hans Holbein the Younger
A solemn woman wearing a soft cap of dense white fur sits with a red squirrel in her lap and a glossy-feathered starling at her shoulder. Common pets in the fifteenth-century, these animals also have a symbolic meaning and serve as clues to the sitter’s identity. She is thought to be Anne Lovell,...
Room 2
Christina of Denmark, Duchess of Milan
Hans Holbein the Younger
This elegant young woman is Christina of Denmark, the youngest daughter of King Christian of Denmark. In 1538, King Henry VIII of England was looking for a fourth wife, after the death of Jane Seymour the previous year. As Henry’s official court artist, Holbein was sent to Brussels to capture the...
Room 2
Erasmus
Hans Holbein the Younger
Room 2 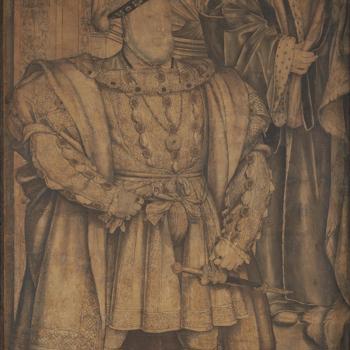 Henry VII and Henry VIII
Hans Holbein the Younger
Room 2
The Ambassadors
Hans Holbein the Younger
Jean de Dinteville, the man on the left, is shown on his second diplomatic mission to England on behalf of Francis I, King of France. To the right is his close friend, Georges de Selve, Bishop of Lavaur. This portrait was painted at a time of religious upheaval in Europe. Although the pope had re...
Room 2