Jan Josephsz. van Goyen was one of the main pioneers of naturalistic landscape in early 17th-century Holland. His many drawings show that he travelled extensively in Holland and beyond. In 1634 he is recorded painting in Haarlem, in the house of Isaac, the brother of Salomon van Ruysdael, who was another of the pioneers of realistic landscape painting in the north Netherlands.

Van Goyen was born at Leiden, and trained in Haarlem with Esaias van de Velde. After returning to Leiden he moved to The Hague in 1631, where he chiefly worked until his death. His earliest dated painting is from 1620.

His daughter married his pupil Jan Steen, the famous painter of genre scenes, in 1649.

(Showing 6 of 11 works)
A River Landscape
Jan van Goyen
Time has not been kind to Jan van Goyen’s river landscape, and his soft muted colours have been dimmed under a coat of yellowed varnish. But we sense the tranquillity of the scene – the vast sky, the quiet ripple of the water under the small boat heading upriver and the patient cows cropping the...
Not on display
A River Scene, with a Hut on an Island
Jan van Goyen
This painting is a companion piece to Fishermen hauling a Net, which is exactly the same size and depicts a scene with three similarly positioned boats, a low horizon and high billowing clouds. However, the muddy island in the middle of this scene is more substantial and, as the title suggests, s...
Not on display
A River Scene, with Fishermen laying a Net
Jan van Goyen
Darkened varnish has taken its toll, and the true colours in Jan van Goyen’s painting are difficult to make out. The picture is almost entirely given over to a vast sky, but there’s enough movement below to capture the atmosphere of a busy autumn day on the river.A series of diagonal lines sweeps...
Not on display
A Scene on the Ice
Jan van Goyen
The cold is almost tangible in Jan van Goyen’s evocation of life on the ice in a seventeenth-century Dutch winter. The horizon is low and the sky vast, so we are on a level with the people portrayed. A bank of grey cloud hovers overhead, just moving enough to let in the pale sun and allow a glimm...
Not on display
A Scene on the Ice near Dordrecht
Jan van Goyen
Barely a third of van Goyen’s painting of life on the ice in seventeenth-century Dordrecht shows people; the rest is sky. But he still manages to pack the picture full of incident and humour. Some people squeeze into horse-drawn sledges, while others zoom across the ice or stand and chat. Some pl...
Not on display
A Windmill by a River
Jan van Goyen
Jan van Goyen’s painting – his view of the wide sweep of the Netherlandish landscape – is a poetic vision. Seen from a sandy rising, the horizon is low and the sky vast. Just a few birds wheel in the towering clouds.Van Goyen was very influential in the development of the ‘tonal phase’ of Dutch p...
Not on display 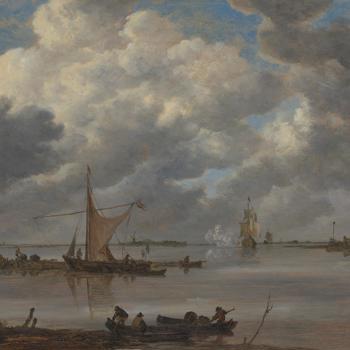 An Estuary with Fishing Boats and Two Frigates
Jan van Goyen
Huge clouds float across a wide sky, seeming to dwarf everything below – even the two frigates heading way out to sea, sails raised, tall and majestic. Frigates were light warships that protected the giant merchant vessels that were the lifeblood of the new Dutch Republic, reaching out across th...
Not on display
Fishermen hauling a Net
Jan van Goyen
This painting is a companion piece to A River Scene, with a Hut on an Island (also in the National Gallery’s collection), which is exactly the same size and depicts a similar horizon and arrangement of boats, but, as the title suggests, includes an island in the middle ground.The two are similar,...
Not on display
The Mouth of an Estuary with a Gateway
Jan van Goyen
The huge sky and the grey – but luminous – tones of this painting are typical of Jan van Goyen’s landscapes and seascapes. About three quarters of the composition is devoted to the towering clouds and the grey haze which obscures the brighter blues above; still more space is used to capture the b...
Not on display
A Cottage on a Heath
Probably by Jan van Goyen
In some paintings a vast, empty landscape might evoke feelings of loneliness or even melancholy, but this small picture, probably painted by Jan van Goyen, seems to do just the opposite. It’s light and airy, with a patch of sun on glowing soil, and tiny, almost comical, trees, their branches mis...
Not on display
Sailing Vessels on a River in a Breeze
Imitator of Jan van Goyen
Because of the presence of a signature and a date, this painting was once thought to be by Jan van Goyen, one of the great Dutch marine painters of the seventeenth century. Both, however, were found to be false and have been removed, so the picture is now attributed to an unknown follower.Small b...
Not on display
You've viewed 6 of 11 paintings