Reynolds was the leading English portraitist of the 18th century. Through study of ancient and Italian Renaissance art, and of the work of Rembrandt, Rubens and Van Dyck, he brought great variety and dignity to British portraiture.

Reynolds was born at Plympton in Devon, the son of a headmaster and fellow of Balliol College, Oxford: a more educated background than that of most painters. He was apprenticed in 1740 to the fashionable London portraitist Thomas Hudson, who also trained Wright of Derby. He spent 1749-52 abroad, mainly in Italy, and set up practice in London shortly after his return.

He soon established himself as the leading portrait painter, though he was never popular with George III. He was a key figure in the intellectual life of London, and a friend of Dr Johnson. When the Royal Academy was founded in 1768, Reynolds was elected its first President. Although believing that history painting was the noblest work of the painter, he had little opportunity to practise it, and his greatest works are his portraits.

His paintings are not perfectly preserved due to faulty technique. The carmine reds have faded, leaving flesh-tones paler than intended, and the bitumen used in the blacks has tended to crack.

British painter and first president of the Royal Academy.

A Black servant in Reynolds’ household was probably a formerly enslaved person and was said to have been brought to England by the family of Valentine Morris (1727-1789, ex-Governor of St Vincent and owner of estates in Antigua).

Reynolds painted George Grenville, Marquess of Buckingham, and his Family (National Gallery of Ireland), which includes an enslaved servant.

He painted a portrait now thought to be of Francis Barber, servant of English writer Samuel Johnson and a former enslaved person in the possession of Colonel Richard Bathurst. Tate owns a copy after Reynolds’s picture; according to Tate’s website, its previous titles, including A Young Black, ‘may suggest that as a Black man, Barber was being treated as an artistic subject, rather than as an individual’. (‘A Young Black Man (?Francis Barber)’, Tate [online], June 2021, <https://www.tate.org.uk/art/artworks/reynolds-a-young-black-man-francis-barber-t01892> accessed 5 August 2021.)

D. Bindman, 'Subjectivity and Slavery in Portraiture' in A. Lugo-Ortiz and A. Rosenthal (eds.), Slave Portraiture in the Atlantic World, Cambridge 2013

A. Lugo-Ortiz and A. Rosenthal (eds.), Slave Portraiture in the Atlantic World, Cambridge 2013

(Showing 3 of 5 works)
Anne, 2nd Countess of Albemarle
Sir Joshua Reynolds
Lady Anne, 2nd Countess of Albemarle, is approaching 60 in this portrait. She is the widow of William-Anne Keppel, 2nd Earl of Albemarle, with whom she had 15 children, although only four sons and two daughters survived childhood. She holds a shuttle and is engaged in ‘knotting’ – a pastime invol...
Room 34
Captain Robert Orme
Sir Joshua Reynolds
This portrait shows Captain Robert Orme (1725–90) at the age of 31, during the war against the French for supremacy in the North American colonies. Reynolds painted it on speculation in the hope of selling it or displaying it to gain more work.Orme was aide-de-camp to General Edward Braddock, com...
Not on display 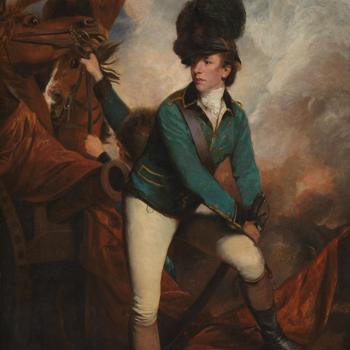 Colonel Tarleton
Sir Joshua Reynolds
Reynolds portrays Banastre Tarleton (1754–1833) aged 27, in action as commandant of the British Legion cavalry in the War of American Independence. Tarleton was famed for his reckless bravery and savagery, as well as for his vanity. He later became MP for Liverpool and defended the slave trade, o...
Central Hall
Lady Cockburn and her Three Eldest Sons
Sir Joshua Reynolds
This painting of Lady Cockburn (1749–1837) with her three energetic infant boys combines a portrait of an individual with the personification of a virtue. It is based on traditional pictures of Charity, one of the three theological virtues, often shown as a mother selflessly caring for her childr...
Room 34
Lord Heathfield of Gibraltar
Sir Joshua Reynolds
General George Augustus Eliott, later Lord Heathfield (1770–90) defended the British territory of Gibraltar against a long siege by the Spanish and their French allies, which ended on 13 September 1782.Reynolds captures the moment of danger before the General’s triumph at Gibraltar. He holds a gi...
Not on display
You've viewed 3 of 5 paintings

(Showing 3 of 4 works)
Portrait of George Gage with Two Attendants
Anthony van Dyck
The central figure in this work is George Gage, a notable art dealer and political agent in the 1620s, acting for King James I and then Charles I. Both he and Van Dyck were in Rome in 1622 and 1623, and it is highly likely that the painting was made then.Van Dyck has depicted Gage as an elegant f...
Not on display
The Agony in the Garden
Giovanni Bellini
Christ’s disciple Judas – visible just beyond the river, leading a group of soldiers to Christ – has betrayed him. Aware of his imminent arrest and death, Christ prays; a cherub appears and presents him with a chalice. The chalice refers to the words of his prayer: ‘My Father, if it be possible,...
Room 55
The Good Samaritan
Jacopo Bassano
A man travelling from Jerusalem to Jericho was attacked by thieves who stole his clothes and left him for dead. A priest and a Levite saw the injured man but both passed him by. A Samaritan bound the man’s wounds, put him on his own mule, and carried him to an inn, where he left money for the man...
Room 9
The Lamentation over the Dead Christ
Rembrandt
Christ’s body has just been taken down from the Cross, and his family and followers mourn over him – a moment known as The Lamentation. Rembrandt laboured over this small monochrome picture. He began by making an oil sketch on paper, then tore out a section and mounted the rest on canvas. He cont...
Not on display
You've viewed 3 of 4 paintings