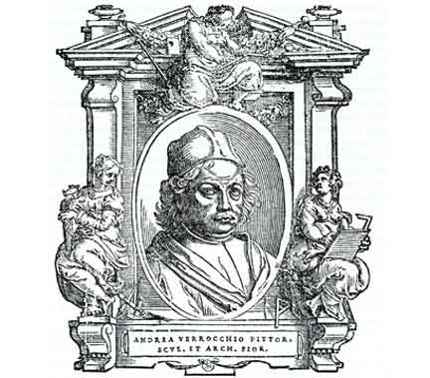 Verrocchio was one of the leading artists of late 15th-century Florence. He is mainly celebrated as a sculptor, though a number of important painters trained in his studio, including Leonardo da Vinci. Some of Leonardo's artistic concerns, such as the twisting pose known as figura serpentinata, and the study of contrasting expressions, originate with Verrocchio.

Verrocchio trained as a goldsmith and went on to work as a sculptor and a painter. There is only one painting which is unanimously attributed to Verrocchio: the 'Baptism of Christ' in the Uffizi, Florence.

However, even in this famous work, Verrocchio seems to have used an assistant (for the dove, the palm tree and the rocks on the right). The picture was later substantially reworked and finished by his former pupil Leonardo da Vinci, responsible to the angel on the left and for re-envisaging much of the landscape and the body of Christ.

The Gallery has three works by Verrocchio and his workshop, one of which, The Virgin and Child with Two Angels, NG2508, appears to be entirely by his hand. Another later composition on the same theme, NG296, was largely executed by Verrocchio but with significant input from an assistant, almost certainly Lorenzo di Credi. A third, Tobias and the Angel, was entirely delegated to another assistant, yet to be firmly identified.

Pietro Perugino and Lorenzo di Credi were his other main pupils and collaborators in the 1470s. These artists both adopted features of Verrocchio’s pictorial style as well as learning from one another and Leonardo. Botticelli is also thought to have been active in Verrocchio’s workshop for a time in the late 1460s.

The most ambitious of his sculptures is the equestrian statue of the military commander Bartolommeo Colleoni, carried out for Venice in the 1480s, which is a response to Donatello's equestrian statue of Gattamelata in Padua. In Florence Verrocchio worked extensively for the Medici family.