Venus, the goddess of love, reclines languidly on her bed, the curve of her body echoed in the sweep of sumptuous satin fabric. The pearly tones of her smooth skin contrast with the rich colours and lively brushstrokes of the curtain and sheets.

Venus‘ face is reflected in the mirror held up by her son, Cupid, but her reflection is blurred – we can’t see who she really is. Perhaps Velázquez wanted to make sure that Venus – the personification of female beauty – was not an identifiable person; we have to ‘complete’ her features with our imagination. Cupid’s face and far leg are very loosely painted and appear almost unfinished: Velázquez deliberately used a sketchy style in order to focus our attention on Venus.

This is Velázquez’s only surviving female nude and one of his most celebrated works. Its nickname, ‘The Rokeby Venus’, originates from Rokeby Park, a country house in County Durham, where the painting hung for much of the nineteenth century.

This is the only surviving female nude painted by Velázquez. The subject was rare in seventeenth-century Spain, where overtly sensual images were met with disapproval by the Catholic Church. In spite of this the king, and wealthy Spanish art collectors in his circle, did own mythological paintings depicting nudes by artists such as Rubens and Titian.

Venus, the goddess of love, reclines languidly on her bed, the curve of her body echoed in the sweep of sumptuous satin fabric beneath her, which was originally more purple than grey in tone. Cupid, her son, holds a mirror up to her, its intertwining pink ribbons – used to hang it on a wall – knotted at the top. The way these ribbons cross Cupid’s wrist may allude to a blindfold, one of his attributes, or to the shackles he used to bind the hearts of lovers.

Venus‘ reflection is blurred: we can’t see who she really is. Perhaps Velázquez wanted to make sure that the goddess – the personification of female beauty – was not an identifiable person; we have to ‘complete’ her features with our imagination. Velázquez originally painted Venus‘ head slightly more in profile so that her nose was visible, but he later changed his mind; perhaps he thought that this would give too much away. That we view this woman from behind and cannot see her face clearly in the mirror is part of what makes the image so intriguing.

The glowing, pearly tones Velázquez has used for Venus’ smooth skin contrast with the rich colours and lively brushstrokes of the curtain and sheets. Cupid’s face and far leg are very loosely painted and appear almost unfinished: Velázquez deliberately used a sketchy style in order to focus our attention on Venus.

Paintings of the naked Venus had been made popular by sixteenth-century Venetian painters, especially Giorgione and Titian. Here Velázquez has merged two traditional representations of the goddess – one of Venus ‘at her toilet’, where she is normally shown sitting upright on a bed, looking at herself in a mirror, and another of her reclining, usually in a landscape. The result here is an image of astonishing originality.

We are not sure when and where the painting was made. It has been variously dated to before, during and after Velázquez’s second trip to Italy (1649–51). It does seem to be the painting listed in a household inventory of 1651 of the Spanish painter and art dealer Domingo Guerra Coronel, where it is not said to be by Velázquez and is described simply as ‘a nude woman’ (‘una muger desnuda’). Soon afterwards the painting was purchased by renowned art collector Gaspar de Haro, 7th Marqués del Carpio y de Heliche, in whose collection it was paired with a sixteenth-century Venetian picture of a naked nymph in a landscape, seen from the front. It hung in a large room alongside other mythological paintings and copies of works in the Spanish royal collection, to which Gaspar had privileged access thanks to his close relationship with Philip IV.

In 1687 the painting was inherited by Gaspar’s daughter, Catalina Méndez de Haro, who married Francisco Álvarez de Toledo, 10th Duke of Alba, shortly thereafter. It remained in his family’s prestigious collection until the early nineteenth century when Charles IV of Spain ordered the Duchess of Alba to sell the painting – and other works – to Don Manuel Godoy, his favourite minister. Godoy hung ‘The Rokeby Venus’ alongside Correggio’s Venus and Mercury with Cupid and Goya’s The Nude Maja and The Clothed Maja (both Museo Nacional del Prado, Madrid) in a very private room (described by a contemporary as a ‘gavinete interior’) – it must have been one of the most remarkable cabinets of female nudes in all of Spain.

This painting takes its nickname, ‘The Rokeby Venus’, from Rokeby Park, a country house in County Durham, where it hung for much of the nineteenth century. Since its arrival and public display at the National Gallery in 1906, the painting has become one of Velázquez’s most celebrated works. It continues to inspire both artists and writers, and has been the subject of novels, films, documentaries, artworks and installations.

The Toilet of Venus ('The Rokeby Venus') 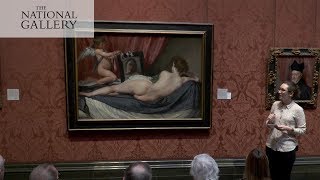 Since the National Gallery acquired Diego Velázquez’s ‘Rokeby Venus’ in 1906, it has become one of the most popular paintings in our collection. But who is the mysterious Venus looking at and what do we know about the origins of this work by the grea...

(Showing 6 of 8 works)
View all
Christ contemplated by the Christian Soul
Diego Velázquez
Tied to a column, Christ has collapsed to the floor. His limp body, tilted head and pained expression show his exhaustion and suffering. Velázquez shows the moment after the Flagellation, when Christ was flogged by Roman soldiers – we can see the sticks and whip they used lying in the foreground....
Room 30
Christ in the House of Martha and Mary
Diego Velázquez
A maid pounds garlic in a mortar, and other ingredients lie scattered on the table: fish, eggs, a shrivelled red pepper and an earthenware jug probably containing olive oil. An older woman points towards her, as if giving her instructions or telling her off for working too hard, or she may be dra...
Room 30
Philip IV hunting Wild Boar (La Tela Real)
Diego Velázquez
Philip IV, King of Spain, and his entourage are hunting boar in a forest clearing. The King appears on horseback just right of centre, weapon pointed at a charging boar, accompanied by his first minister and possibly his two brothers. To the far left another boar is being attacked by a pack of do...
Room 30
Philip IV of Spain
Diego Velázquez
Velázquez painted many portraits of Philip IV, King of Spain, throughout his reign. This is the last painted image of the King by the man who served as his court artist from 1623. He looks middle-aged, and tired: his sagging flesh and puffy eyes suggest the weight of responsibility resting on his...
Room 30
Philip IV of Spain in Brown and Silver
Diego Velázquez
Philip IV, King of Spain, was normally shown in fairly sombre clothing, so the unusual splendour of his costume here suggests that this work was made to celebrate something particular. In 1632, he wore a similar outfit for an important ceremony in which the Cortes of Castile pledged an oath of al...
Room 30
Portrait of Archbishop Fernando de Valdés
Diego Velázquez
Fernando de Valdés has an imposing stare. His black cloak – an expanse of plain, heavy fabric – makes him appear larger than he really is, and a matching bishop’s hat indicates his prestigious status within the Church. His clothing and the opulent red curtain trimmed with gold, like the chair on...
Room 30
Saint John the Evangelist on the Island of Patmos
Diego Velázquez
On the Greek island of Patmos, Saint John the Evangelist had a vision of the Woman of the Apocalypse, which he recorded in the New Testament Book of Revelation. Here he sits with an oversized book in his lap, his quill pen poised, and looks towards the tiny illuminated female figure hovering in t...
Room 30
The Immaculate Conception
Diego Velázquez
A young woman floats above a landscape, standing on a translucent moon and with a crown of 12 stars. This imagery is based on the New Testament Book of Revelation. In it, Saint John the Evangelist records his vision of the Woman of the Apocalypse, who bears a male child and is threatened by a dra...
Room 30
You've viewed 6 of 8 paintings