Cologne was one of the most prosperous cities in 15th-century Germany. Its numerous churches were filled with paintings produced by its large population of painters. Some of these came from other towns to work in Cologne: Stephan Lochner, whose name is associated with a charming and technically accomplished style, was originally from southern Germany. The witty painter, the Master
of the Saint Bartholomew Altarpiece, a native of the northern Netherlands, produced a number of works for the Carthusian monastery in Cologne.

East of Cologne in Westphalia, the painter identified only as the Master of Liesborn established a large workshop in the latter part of the 15th century, supplying altarpieces to the numerous ecclesiastical foundations near Münster, many of which were being reformed. They included the Benedictine Abbey of Liesborn. The Master of Liesborn began a large winged altarpiece for the high altar, but it was completed by another painter, Jan Baegart.

Lamentation (Front of Panel)
Master of the Aachen Altarpiece
Room 62
The Crucifixion
Master of the Aachen Altarpiece
This is the central panel of a triptych (a painting in three parts) that was made for the church of St Columba, Cologne. Its two side panels – or shutters – are in the collection of the Walker Art Gallery, Liverpool.A small group mourns the crucified Christ: the Virgin Mary, his mother, stands at...
Room 62
The Presentation in the Temple
Master of the Life of the Virgin
A priest, Simeon, receives the infant Christ from the Virgin Mary, ready to perform the Jewish rite of circumcision. Two women cup turtle doves in their hands, the traditional offering for the ritual of purification, made after a woman had given birth (Luke 2: 21–24).Simeon recognised Christ’s di...
Room 62
The Conversion of Saint Hubert: Left Hand Shutter
Workshop of the Master of the Life of the Virgin
Saint Hubert kneels in prayer in front of a vision of Christ upon the Cross, which has miraculously appeared between the antlers of a stag. Hubert was a courtier in Metz, a city in the eastern Frankish Kingdom, and an enthusiastic hunter. He had been out with his dogs in the forest of Ardennes wh...
Room 62
The Mass of Saint Hubert: Right Hand Shutter
Workshop of the Master of the Life of the Virgin
This panel once decorated the inner face of the right-hand shutter of an altarpiece made for the Benedictine abbey in Werden, near Cologne. An earlier episode of the saint’s life – the moment of his conversion to Christianity – appeared on the left-hand shutter.After his conversion, Hubert devote...
Room 62
Saints Peter and Dorothy
Master of the Saint Bartholomew Altarpiece
Saint Peter clutches a Bible with a soft leather cover to his chest. In the same hand he holds two unwieldy keys – those to the kingdom of heaven, promised to him by Christ. Saint Dorothy holds only a tiny delicate flower to her breast, presumably plucked from the basket of blooms in her left han...
Room 62 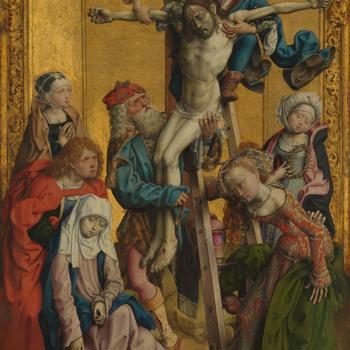 The Deposition
Master of the Saint Bartholomew Altarpiece
The removal of Christ’s body from the Cross takes place in what appears to be a shallow gilded niche. The setting, with its stiff geometric decoration around the arch, may be intended to resemble contemporary tabernacle altarpieces, which included three-dimensional carvings set beneath a canopy a...
Room 62 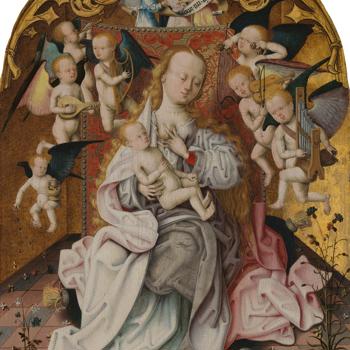 The Virgin and Child with Musical Angels
Master of the Saint Bartholomew Altarpiece
This painting of the Virgin Mary with the infant Christ was probably made for private devotion. Seated on a cushion, its thick tassels protruding from beneath the folds of her draperies, the Virgin is about to breastfeed her child. The flowers in the vase on the right are pinks, called Nelke (‘na...
Room 62
The Virgin and Child in Glory with Saints
Workshop of the Master of the Saint Bartholomew Altarpiece
In the central panel of this triptych (a painting in three parts), the Virgin Mary, surrounded by the golden rays of the sun, embraces Christ, her infant son. He holds an orb topped with a cross, a sign of his universal power, while she is crowned as Queen of Heaven by two angels.The frame is ori...
Room 62