In 1 Corinthians 13, Saint Paul discusses three traits that would become known as the theological virtues: faith, hope and charity. He believed that charity, an expression of the love of God and of one’s neighbour, was the most important. Here, the inscription ‘CHARITAS’ at the top of the picture identifies the female figure. Charity was personified as a woman with her children in art from the fourteenth century onward.

Charity is draped in a transparent veil that curves around her body. She wears a choker and gold chain in the style of jewellery worn by women of the court of Saxony, where Cranach worked. In contrast to Charity and her children, who wear nothing, the doll held by the girl on the left is clothed in a green dress in the contemporary style.

Cranach and his workshop painted this subject about a dozen times. In many of the other versions, Charity is depicted seated in a landscape.

(Showing 6 of 10 works)
Cupid complaining to Venus
Lucas Cranach the Elder
Cupid, the god of erotic love, is complaining to his mother, Venus, the goddess of love: he has been stung by bees after stealing a honeycomb. Venus directs her attention towards the viewer instead. Her narrowed gaze appears flirtatious and she clutches the branch of an apple tree, evocative of t...
Room 16
Diptych: Two Electors of Saxony
Lucas Cranach the Elder
These joined portraits depict two future electors of Saxony, Johann the Steadfast and his son, Johann Friedrich the Magnanimous – Cranach worked as court painter to successive electors from 1505 until his death in 1553. The coats of arms on the back of the right panel help to confirm their identi...
Not on display
Portrait of a Woman
Lucas Cranach the Elder
We don‘t know the identity of this woman dressed in sumptuous fabrics and heavy gold jewellery, but her clothing is like that worn by the elite of society and ladies of the Saxon court. Her outfit is, in parts, physically impossible: the rings she wears under her gloves are higher up her fingers...
Room 16
Portrait of Johann Friedrich the Magnanimous
Lucas Cranach the Elder
This painting makes up the right panel of a portrait diptych (a painting made of two parts) that depicts two future electors of Saxony, Johann the Steadfast and his son, Johann Friedrich the Magnanimous.Johann Friedrich was six years old when this portrait was made. Against convention, he was por...
Room 16
Portrait of Johann the Steadfast
Lucas Cranach the Elder
Johann the Steadfast, Elector of Saxony from 1525 to 1532, would have been about 38 when this portrait was made. He wears a sumptuous black hat and coat, both decorated with gold thread and seed pearls.This panel is part of a diptych (a painting made of two parts) – the conjoining panel depicts J...
Room 16
Portrait of Johannes Feige
Lucas Cranach the Elder
The coat of arms on the left resembles that of Johann Feige, chancellor of Hesse (a state in central Germany) between 1514 and 1542, while the shield on the right may represent that of his mother. Feige moved in the same Protestant circles that employed Cranach, and is likely to have known the ar...
Room 16
Primitive People
Lucas Cranach the Elder
The subject of this painting has been much debated, but it’s generally thought to show an imagined view of a past and primitive society. Cranach made a number of similar paintings from 1527 to 1535. Since the twentieth century it has been assumed that the origin of the subject lies in a classical...
Room 16 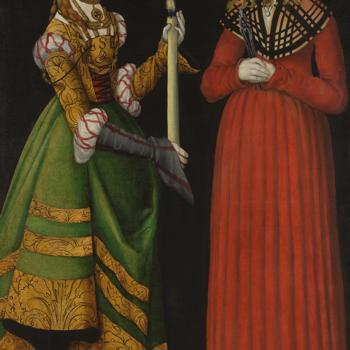