Campin is usually now assumed to be identical with the Master of Flémalle. He was, with van Eyck, the founder of the realistic style of oil painting in the Netherlands in the early 15th century. His influence was further extended by his pupil Rogier van der Weyden. Campin was active at Tournai from 1406. The group of works attributable to him include three life-sized panels, formerly at Flémalle and now at Frankfurt, the National Gallery's 'Virgin and Child before a Firescreen' and 'Virgin and Child in an Interior'.

In the early 15th century the Netherlands belonged to the Duchy of Burgundy. The realistic detail of Campin's work is accompanied by a weightiness in the figures which is associated with Burgundian sculpture. It is paralleled in Italy in the work of Florentine early Renaissance artists. This quality is also evident in his portraits. 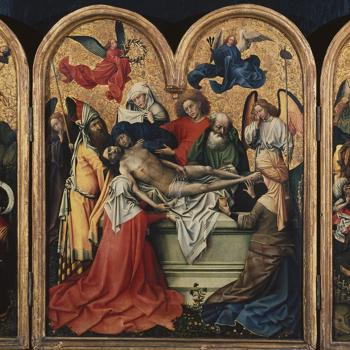 The Entombment (The Seilern Triptych)
Robert Campin
Room 63
The Virgin and Child before a Firescreen
Follower of Robert Campin
This puzzling picture of the Virgin and Child is often called the ‘Firescreen Madonna’, after the large wicker firescreen behind the Virgin’s head. We do not know who it was made for, or where or how it was used. We are not even sure how it originally looked: it was extensively restored in the ni...
Not on display
Portrait of a Franciscan (?)
Workshop of Robert Campin
We don’t know who the sitter in this almost postcard-sized portrait is. Although he wears the grey habit of a Franciscan, his hair is not tonsured – shaved on top as a sign of humility – as was customary for them. The precise identity of the artist is also uncertain, although he seems to have bee...
Room 63
The Virgin and Child in an Interior
Workshop of Robert Campin (Jacques Daret?)
This tiny painting – almost postcard sized – shows an endearing fireside scene: Christ’s bath time. The Virgin sits on a cushion on the floor, surrounded by domestic paraphernalia. There is a brass bowl in front of the fire, and a basket of white cloths – presumably nappies or swaddling bands – o...
Room 63
The Virgin and Child in an Apse with Two Angels
After Robert Campin
We are looking through a gilded arch into a small chapel in which the Virgin is breastfeeding the Christ Child to an angelic musical accompaniment. She cradles him in her arms, and looks down affectionately as he hungrily squeezes her breast.This is one of around 60 versions of a lost painting by...
Not on display
You've viewed 6 of 7 paintings