The National Gallery celebrated the 20th Anniversary of the Sainsbury Wing in 2011.

The Sainsbury Wing was opened by Queen Elizabeth II on 9 July 1991.  The building was presented to the nation by the three Sainsbury brothers  – John, Simon and Timothy – and over the past 20 years it has offered millions of visitors a fitting space in which to contemplate the National Gallery’s outstanding collection of early Renaissance paintings.

Written and narrated by Alan Crookham

The Sainsbury Wing was opened by Queen Elizabeth II on 9 July 1991.  Intended as a new home for the National Gallery’s world-class collection of early Renaissance paintings, its opening was a moment of celebration, both for the Gallery and the donors who had so generously funded the project.  However, the prospects for the site had not always been so propitious.

Its former occupant, Hampton’s Furniture Store, was destroyed by fire during the Blitz in 1940 and, although a temporary shop re-opened on the site after the war, by the late 1950s the area had become a waste-ground.

In 1958 the Government acquired the Hampton Site as a possible location for an extension to the National Gallery, but plans to develop the plot came to nothing and it remained empty – an old bomb site which was destined to be no more than a car park for decades to come.

It was only in 1981 that an agreement was finally reached which enabled the Secretary of State, Michael Heseltine, to launch a competition for the design of the new extension.

The winning architects were ABK, but their revised design stirred up controversy when in May 1984 Prince Charles criticised it as a ‘monstrous carbuncle on the face of a much-loved and elegant friend.’

Prince Charles’s view was echoed by many among the general public and in the Press.  Ultimately, the ABK design was refused planning permission in September 1984 and the proposal to extend the National Gallery came to a halt.

A halt, that is, until April 1985 when the generosity of the three Sainsbury brothers – Simon, John and Timothy – revived the proposed extension after it was announced that the Sainsburys would fund a new wing entirely for the use of the Gallery.

A new search for an architect began and a shortlist of six was drawn up:

It was Venturi who was revealed to the world as the National Gallery’s preferred architect in January 1986.

Venturi perfected his designs according to the Gallery’s brief, paying particular care to ensure that the space would be appropriate for the early Renaissance paintings. The difficulties faced by the architects are explained here by the Gallery’s director Nicholas Penny.

Nicholas Penny: One of the problems that one has hanging the earliest paintings in the National Gallery is that they are some of the largest pictures – the great altarpieces – and some of the smallest, those that come from domestic chests and small devotional paintings intended to be looked at in private. And the architects have solved the problem that we have in displaying these works by having very large openings so you are always aware when you are in one room of a sequence of rooms beyond – and so this great sequence of rooms recalls the space of a great church without in any way imitating it. And that suits great altarpieces very well. They can be seen from afar and you feel they have something of the ecclesiastical context from which they were removed. But at the same time the plan of these galleries as individual rooms is quite small and I think it’s very conducive to the contemplation of small works of art.

Narrator: In January of the following year construction began, with the ceremony to lay the foundation stone of the Sainsbury Wing, taking place in the presence of the Prince and Princess of Wales on 30 March. The reinforced concrete structure was completed the following year and marked by the event known as the Topping Out ceremony.  The structure was then made weathertight before work began on finishing the inside of the building, and the whole was unveiled in December 1990 and finally opened to the public by Queen Elizabeth II the following July.

From the outset, the Sainsbury Wing had been planned as a space where the Gallery could breathe new life into the display of its outstanding collection of early Renaissance paintings.  The public could now view the earliest paintings in the collection in a broadly chronological sequence in which pictures from southern and northern Europe were no longer separated but were placed in adjoining rooms. These paintings, mostly religious and devotional pictures or early portraiture, could now be enjoyed in a series of galleries whose interiors are reminiscent of the Italian churches in which many of them would originally have been housed.

Twenty years after it first opened, externally the Sainsbury Wing has become part of the fabric of Trafalgar Square, while inside it continues to fulfil its role as a fitting home for one of the world’s greatest collections of early Renaissance paintings.

Selected works from the Sainsbury Wing

Tobias and the Angel
Workshop of Andrea del Verrocchio
The blind old man Tobit, a merchant and devout Jew, sent his son, Tobias, on a long journey to collect a debt. God sent the Archangel Raphael – the winged figure on the left of the scene – to accompany Tobias and his dog.Tobias carries a fish that he has gutted; Raphael holds its organs in a litt...
Room 59
The Martyrdom of Saint Sebastian
Antonio del Pollaiuolo and Piero del Pollaiuolo
A pale, clean-shaven young man, naked but for a loincloth, is bound to a tree. He gazes towards heaven, seemingly unaffected by the four arrows which pierce his upper body. This Saint Sebastian, a Roman soldier who secretly converted to Christianity and was executed for his faith.This altarpiece...
Room 59
The Annunciation, with Saint Emidius
Carlo Crivelli
The Archangel Gabriel descends from God to tell the Virgin that she is to bear a child – a moment known as the Annunciation – but has been distracted from his mission by a bishop saint, who has stopped him in the street of a Renaissance town. This is Saint Emidius, patron saint of the town of Asc...
On display elsewhere
The Arnolfini Portrait
Jan van Eyck
This must be one of the most famous and intriguing paintings in the world. A richly dressed man and woman stand in a private room. They are probably Giovanni di Nicolao di Arnolfini, an Italian merchant working in Bruges, and his wife.Although the room is totally plausible – as if Jan van Eyck ha...
Room 63
Venus and Mars
Sandro Botticelli
Venus, the goddess of love, looks over at her lover Mars. She is alert and dignified, while he – the god of war – is utterly lost in sleep. He doesn‘t even notice the chubby satyr (half child, half goat) blowing a conch shell in his ear.This picture was probably ordered to celebrate a marriage, a...
Room 58 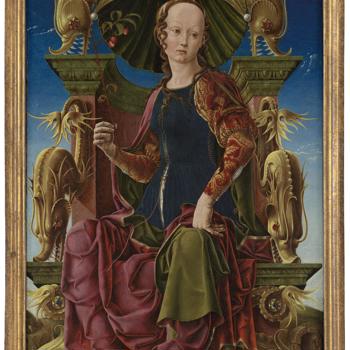 A Muse (Calliope?)
Cosimo Tura
This imperious lady once looked down from the walls of the studiolo (study) at Belfiore, the hunting retreat belonging to the dukes of Ferrara, part of a decorative scheme showing the nine Muses. The theme was chosen by Leonello d’Este, Duke of Ferrara, and was begun by a painter called Angelo da...
Room 57
The Battle of San Romano
Paolo Uccello
It’s hard to follow what’s going on in this large and busy painting, partly because it’s much darker now than when it was painted. This is one of three battle scenes by Uccello showing the Florentine victory at San Romano in 1432.The Florentine commander, Niccolò da Tolentino, rides a white charg...
Room 53
The Baptism of Christ
Piero della Francesca
Piero was the first artist to write a treatise on perspective – that is, creating an illusion of three-dimensional space on a flat surface. Here, he has painted objects in proportion, so that they appear as we see them in real life. This emphasises the depth of the landscape, but also the harmony...
Room 53
The Virgin and Child ('The Madonna with the Iris')
Workshop of Albrecht Dürer
The Virgin Mary breastfeeds the infant Christ in a walled garden surrounded by flowers. God the Father, a small figure radiating light, appears in the sky above. The image of the Virgin and Christ Child in a garden was derived from the poetic imagery of the Song of Solomon, a book of the Old Test...
Room 65
Saint Michael Triumphs over the Devil
Bartolomé Bermejo
A saint clad in shining armour raises his sword to strike a hideous demon beneath his feet. This is the Archangel Michael fighting the devil, as described in the Book of Revelation. His multi-coloured wings meet over his head and curve protectively around the man who kneels at his feet. This is t...
Room 64
Doge Leonardo Loredan
Giovanni Bellini
Leonardo Loredan knows that he is being looked at, but he does not return our gaze. He is the doge, the ruler of the Venetian Republic; elected in 1501, he ruled until his death in 1521.He wears white silk damask robes woven with gold and silver metal thread, clothing reserved for the most splend...
Room 55
The Incredulity of Saint Thomas
Giovanni Battista Cima da Conegliano
The rich colours of this large painting were designed to make maximum impact. Commissioned by a confraternity dedicated to Saint Thomas, it shows the moment that the doubting saint was convinced of Christ’s resurrection. We see him place his fingers in Christ’s wound, checking that Christ had ind...
Not on display
The Wilton Diptych
English or French (?)
This small, portable altarpiece is one of a handful of English panel paintings to have survived from the Middle Ages. Made for Richard II, King of England from 1377 to 1399, in the last five years of his life, it combines religious and secular imagery to embody his personal conception of kingshi...
Room 51
The Virgin and Child
Masaccio
This was the central panel of a large altarpiece made for the church of Santa Maria del Carmine in Pisa. The Virgin’s sturdy form, which looks similar to contemporary Florentine sculpture, casts a shadow against the carved throne. Christ’s body seems fleshy and three-dimensional; Masaccio has don...
Room 60
The Assumption of the Virgin
Matteo di Giovanni
This magnificent and imposing vision of the Virgin Mary’s body and soul being taken to heaven was the central panel of a large polyptych (a multi-panelled altarpiece). It was made for the monastery of Sant'Agostino in Asciano, in the countryside near the Tuscan town of Siena.The Virgin is shown r...
Not on display