For much of his lifetime, the Florentine Sandro Botticelli, was one of the most celebrated artists in Italy. His gracious female figures, impressive altarpieces and mythological scenes were greatly admired. He worked for the Pope in Rome, and his paintings were sought by patrons as far afield as Spain.

Botticelli’s artistic talent developed quickly. By the age of 25, he was the master of his own workshop. His training – with the goldsmith Maso Finiguerra, the artistic polymaths Antonio del Pollaiuolo and Andrea del Verrocchio, and the graceful painter Fra Filippo Lippi – made drawing the centre of his artistic practice. It also gave him an entrée into the highest circles in Florence.

Botticelli spent much of his life working for the Medici family and their associates. He remained in Florence after the Medici were expelled from the city in 1494. Some of his later work reflects the teachings of the visionary friar, Savonarola, who dominated Florentine public life for four turbulent years.

By the end of his life, Botticelli’s art and innovation had largely been forgotten. In the 19th century, a renewed interest in Florentine Renaissance painting brought fresh appreciation of his work. Today his pictures are prized across the world. 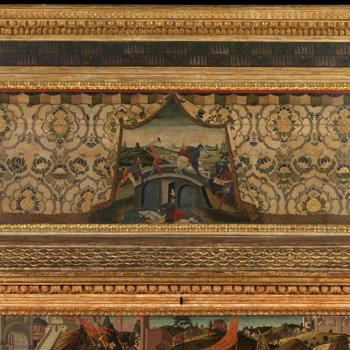 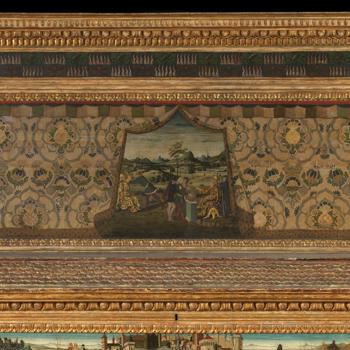 The Nerli Spalliera
Biagio d'Antonio and Jacopo del Sellaio and Zanobi di Domenico
Room 58
'Mystic Nativity'
Sandro Botticelli
The infant Christ reaches up towards the Virgin Mary, oblivious of his visitors – the Three Kings on the left and the shepherds on the right. The golden dome of heaven has opened up and is circled by 12 angels holding olive branches entwined with scrolls and hung with crowns. In the foreground, t...
Room 58
Portrait of a Young Man
Sandro Botticelli
This apparently simple portrait of a young man was revolutionary in Italian painting. Until this moment, artists painted people either in profile view, so only half their face was visible, or by turning them three-quarters to face the viewer.Here, Botticelli paints the boy head on, mapping his wh...
Room 58
The Adoration of the Kings
Sandro Botticelli
Botticelli painted at least six scenes of the Adoration of the Kings. This, one of his most expansive and ambitious, is painted in a circular format called a tondo. The figures and animals in the outer circle face inwards to pay respect to the Christ Child, inviting the viewer to do the same. Bo...
Room 58
Venus and Mars
Sandro Botticelli
Venus, the goddess of love, looks over at her lover Mars. She is alert and dignified, while he – the god of war – is utterly lost in sleep. He doesn‘t even notice the chubby satyr (half child, half goat) blowing a conch shell in his ear.This picture was probably ordered to celebrate a marriage, a...
Room 58
Seven Saints
Fra Filippo Lippi
Seven saints – all patron saints of members of Florence’s ruling family, the Medici – talk and interact as though Lippi was painting an animated portrait of a group of historical figures.On the far left is Saint Francis. His meditation on the suffering of Christ was so profound that he developed...
Room 58
The Annunciation
Fra Filippo Lippi
The Archangel Gabriel, huge peacock-feather wings outstretched behind him, kneels in front of the Virgin Mary, his head bowed in reverence. He has arrived with the news that she will conceive a child, Jesus Christ, through the Holy Ghost.A small dove, the symbol of the Holy Ghost, flies towards t...
Room 58
A Satyr mourning over a Nymph
Piero di Cosimo
A nymph – a mythological spirit of nature imagined as a young woman – lies on a patch of grass in the foreground, blood streaming from wounds on her throat and hand. A satyr, half man and half goat, kneels next to her, mourning her death. A dog sits at her feet, balancing the stooping figure of t...
Room 58