A saint clad in shining armour raises his sword to strike a hideous demon beneath his feet. This is the Archangel Michael fighting the devil, as described in the Book of Revelation. His multi-coloured wings meet over his head and curve protectively around the man who kneels at his feet. This is the donor Antoni Joan, lord of Tous, his heavy gold chain and sword nestled in the crook of his arm identifying him as a knight.

This is the most important fifteenth-century Spanish painting in Britain. It was almost certainly the central part of a polyptych (multi-panelled altarpiece) commissioned for the high altar of the church of San Miguel in Tous, near Valencia. De Cárdenas, known as ‘Bermejo’ because of his red hair or ruddy complexion, has signed the painting on a folded piece of parchment at the bottom left, using the Latin version of his nickname, ‘Rubeus’.

A saint clad in shining armour raises his sword to strike a hideous demon beneath his feet. This is the Archangel Michael fighting the devil, as described in the Book of Revelation.

Saint Michael’s commanding figure fills the space. His multi-coloured wings meet over his head and curve protectively around the man in a silk brocade robe who kneels at his feet (his robe has now faded: it would originally have been more purple in tone). This is the donor, Antoni Joan, lord of Tous, his heavy gold chain and sword identifying him as a knight. He holds a small book which displays, in Latin text, two of the so-called Penitential Psalms, a special group of psalms asking for forgiveness for sins.

This is the most important fifteenth-century Spanish painting in Britain. It was almost certainly the central part of a multi-panelled altarpiece, a retablo or polyptych, commissioned for the high altar of the church of San Miguel in Tous, near Valencia. It is the earliest documented work by Bartolomé Bermejo, who received a downpayment for it in February 1468. De Cárdenas, known as ‘Bermejo’ because of his red hair or ruddy complexion, has signed the painting on a folded piece of parchment at the bottom left, using the Latin version of his nickname, ‘Rubeus’. No other parts of the altarpiece are known to survive, though it may well have included both painted and sculpted parts. Medieval Spanish altarpieces often had very elaborate frames; the strips of blue down each side of the panel were presumably visible through the carved and gilded wood frame.

As an image of good conquering evil, Saint Michael and the devil was a popular subject with late medieval artists; Carlo Crivelli’s Saint Michael and Piero della Francesca’s Saint Michael are almost exactly contemporary with Bermejo’s painting. The subject had a particular meaning in Spain, as Saint Michael was often associated with the reconquista, the expulsion of Spain’s Muslim community by its Christians in the fifteenth century.

The saint is shown as a medieval knight, dressed in contemporary armour elaborated beyond anything made by man. Gilded plates encrusted with gemstones encase his body; his breastplate, belt and sword sheath are covered with green silk velvet. His wrists and ankles are ringed with pearls, a pearl diadem sits on his forehead and his golden breastplate reflects the Gothic spires of Heavenly Jerusalem, the celestial city described in the Book of Revelation. In his left hand he grasps a round shield with a convex crystal centre. In spite of its obvious weight, his brocade cloak with its sumptuous red lining and jewelled edges billows behind him. This angelic warrior personifies the splendour of heaven itself.

As well as being highly decorative the painting has a strong underlying geometric structure. The graceful curve of the saint’s body in one direction is balanced by the mass of the cloak flying up in the other; the angle of his sword echoes the line made by the donor’s black hat and brocade robe. The pale oval of the saint’s face is framed by the curves of his arm and wings, and contrasts vividly with the rich colours of his dress and feathers. His bent right leg echoes the long line of his sword’s sheath, and his curved wings touch the ground, framing and containing the energy of his movement. The whole composition forms a triangle, with Saint Michael’s raised hand at the apex, and the donor and devil at the base. This large triangle is echoed by a smaller one encompassing the donor, kneeling in calm contemplation, in a vivid contrast with the writhing, sprawling demon.

Although his face is calm, Saint Michael has been caught mid-motion, balancing on the winged demon. From its red eyes, horns and gaping mouth to its armoured and reptilian body, it forms a hideous echo of the warrior-angel, reminding the viewer that devils were once angels. Its contorted limbs are half snake and its whole torso is another face, with eyes for nipples and snakes slithering from a mouth in its belly. Its clawed tail even curls around the saint’s armoured leg. Composite demons – those with bodies made up of parts of many creatures – were a traditional way of visualising evil in medieval art.

Bermejo shows off his mastery of oil painting techniques to create a vivid contrast of colours and textures, from the smooth reflective surfaces of the armour and the glitter of the chain mail to the deep, angular creases and crinkles of the textiles. His confident use of oil-glazing techniques sets him apart from other Spanish painters of the period. His interest in fabrics and the careful depiction of plants and flowers imply a deep knowledge of Netherlandish painting, in particular the work of Hans Memling and Rogier van der Weyden. It has sometimes been thought that Bermejo must have been trained in the Netherlands, but he could well have seen Netherlandish paintings in Spain. Altarpieces were being imported from northern Europe and displayed in Spanish churches in the late fifteenth century.

The artist’s work is also firmly embedded in Spanish painting traditions. Although the ground on which the figures stand looks real, the ornately punched gold background behind the saint is typical of Spanish medieval painting. Bermejo’s fusion of conventional Spanish practices with the latest Netherlandish techniques must have appealed to his patron’s desire to have an altarpiece that was at once modern and traditional, like those Carlo Crivelli was producing at the same time in Italy.

The rich colours of the oil paint, and the illusory shine of the metals and silks it creates, are contrasted with the real shimmer of the burnished gold ground. The whole altarpiece must have glowed and glimmered in the dim light of a medieval church.

In detail: Saint Michael Triumphs over the Devil 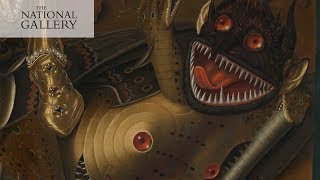 Delve into the history of how Saint Michael has appeared in paintings over the centuries and the art of Bartolomé Bermejo with our Director Gabriele Finaldi.