This must be one of the most famous and intriguing paintings in the world. A richly dressed man and woman stand in a private room. They are probably Giovanni di Nicolao di Arnolfini, an Italian merchant working in Bruges, and his wife.

Although the room is totally plausible – as if Jan van Eyck had simply removed a wall – close examination reveals inconsistencies: there’s not enough space for the chandelier, and no sign of a fireplace. Moreover, every object has been carefully chosen to proclaim the couple’s wealth and social status without risking criticism for aping the aristocracy.

The man’s hand is raised, apparently in greeting. On the back wall, a large convex mirror reflects two men coming into the room, one of whom also raises his arm. Immediately above it is Van Eyck’s signature. Could the man in mirror be van Eyck himself, with his servant, coming on a visit?

This must be one of the most famous paintings in the world, and one of the most intriguing. A richly dressed man and woman stand in a private room. Although it looks as if Jan van Eyck painted a real room exactly has he saw it, every object has been carefully chosen to proclaim the couple’s wealth and social status without risking criticism for aping the aristocracy.

The house is of brick. Its window opens onto a garden, and a cherry tree can be glimpsed through the open shutters. The large and luxurious bed is covered with expensive red woollen cloth, and red cushions and fabric are scattered on the bedside chair and the bench. This is not a bedroom but a reception room, and the bed – the most expensive item of furniture in the house – is an essential part of its furnishings. The chair and bench are ornately carved, an oriental carpet lies on the floor and a splendid brass chandelier hangs from the ceiling. Even the carelessly scattered oranges indicate wealth; such fruit was extremely expensive. But this is not a palace: the floor is boarded and the walls are plastered rather than panelled or hung with tapestries. We are looking into a reception room in the comfortable, modern mansion of a wealthy merchant.

The room’s restrained luxury is equalled by the careful sartorial splendour of the couple. Their clothes are expensive and fashionable, but not flashy. The man wears a hat of plaited straw, and a dark tabard, probably of silk velvet, trimmed with brown fur. Under it is a black, possibly silk, doublet, with silver cuffs. His muddy pattens (overshoes) lie discarded on the floor. The woman wears a fine green wool overdress with elaborate dagged sleeves and a long train which falls in thick folds around her feet. It is trimmed with a white fur, possibly ermine or squirrel belly. She is not pregnant, though she might look it: she is holding up her bulky gown in front of her, as ladies commonly did. Her hair is caught up in fashionable but modest horns, held in red nets, and covered with an intricately folded veil.

So who are the people in this intimate setting? They are clearly husband and wife, and for many years the painting was understood as representing a marriage ceremony, though not anymore. From early on the painting was identified as showing one ‘Hernoul le Fin’ or ‘Arnoult Fin’. The Arnolfini were an extensive family of Italian merchants, with various members in Bruges at this period. The most likely candidate is Giovanni di Nicolao di Arnolfini, known as Giannino or Jehannin, who would have been in his late thirties in 1434. The lady is probably his second wife, whose identity is unknown. They may have been friends of van Eyck – he painted another portrait of the man at an older age (Staatliche Museen, Berlin). A large round mirror hangs right in the centre of the composition, its convex glass showing not just the compressed and contorted room but also two men coming in through a door behind us. The first man seems to be raising his left arm and stepping down steps from the passage. Immediately above the mirror is a flamboyant signature: Johannes de Eyck fuit hic. 1434 (‘Jan van Eyck was here. 1434’). Are the men in the mirror van Eyck himself and his servant, arriving on a visit?

Technical analysis tell us much about how the picture was made. Infrared reflectography shows that the underdrawing was done in stages. In the first one van Eyck sketched in the figures, the main pieces of furniture and the basic architecture of the room, but left out many of the objects for which the painting is now famous: the watchful terrier, the chandelier, the chair, the beads hanging on the wall and the discarded shoes. These were painted in at a late stage. Van Eyck also altered the man and woman’s faces and bodies. In the initial underdrawing, Arnolfini had a larger face and even odder features. His feet were in a different position, his robe was shorter and his hat larger. His wife originally looked up towards her husband and her features were lower, so her forehead seemed even higher. Van Eyck often manipulated his sitters‘ appearance to emphasise heads and hands, but here the faces, especially the man’s, have been altered substantially. Arnolfini must have been a strange-looking man, and in the second underdrawing van Eyck improved his proportions and idealised his features.

Even the room itself if not a literal record of the couple’s home. Although it looks as if van Eyck has simply removed a wall, close examination reveals inconsistencies. The chandelier cannot fit into the space it seems to occupy; there is no sign of a fireplace; the bed is too short and the ornate convex mirror on the back wall seems impossibly large. As usual, van Eyck created a perfectly convincing show of reality but altered things to fit his aesthetic purposes and perhaps also to accord with Arnolfini’s aspirations.

However, there is nothing unusual in the pigments used – this illusion of reality relied on van Eyck’s skill, not on any technical innovation. Look closely and you can see an astonishing level of detail. The oranges reflect in the polished wood of the casement, and the beads hanging by the bed cast both shadows and reflections on the wall behind. For a painting that seems so precise, it was surprisingly quickly and freely painted. Van Eyck was almost bouncing the paintbrush off the panel to get small touches of colour, and he used his fingers and the brush handles as well as the points of the brushes. We can see his thumbprint by the shadow of the dog’s leg, and the bristles of the brush hanging by the bed are scratched into the paint.

The painting has a fascinating afterlife. By the sixteenth century it was in the hands of Margaret of Austria, Regent of the Netherlands. From her, it migrated into the Spanish royal collection. It next appears in the possession of James Hay, a Scottish soldier who was in Spain during the Peninsular War (1807–14). We don’t know how Hay got it, but he brought it back to England and it was bought by the National Gallery in 1842 for ‘the moderate price’ of 600 Guineas. It was our first Netherlandish painting. 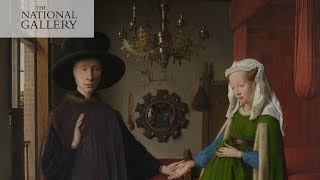 This close look at van Eyck’s jewel-like masterpiece of 1434 considers the intrigue and wonder it sparked when it first went on show at the National Gallery in 1843.

Portrait of a Man ('Léal Souvenir')
Jan van Eyck
This small portrait is puzzling in many ways. We don‘t know who this man was or why he is holding a scroll, which is – rather strangely – inscribed on the outside. The painting’s tall, narrow shape is unusual and there are mysterious inscriptions carved into the very large, cracked stone parapet...
Room 63
Portrait of a Man (Self Portrait?)
Jan van Eyck
This impassive face is almost certainly that of Jan van Eyck himself, and the painting a powerful statement of his artistic skill. His motto, Als Ich Can, is painted in Greek letters on the upper frame; the words are an abbreviation of a Flemish saying and a pun on Jan’s name: ‘as I[ich/Eyk] can...
Not on display
A Young Man holding a Ring
Follower of Jan van Eyck
We don‘t know the identity of the young man in this small portrait, but his clothes are those of a wealthy individual. The fur of his cuffs and collar is spotted, which is unusual in mid-fifteenth-century Netherlandish painting; it might be lynx. The laced collar of his doublet is perhaps a Germa...
Not on display
Marco Barbarigo
Follower of Jan van Eyck
This serious-looking young man is Marco Barbarigo, known as ‘Marco the Rich’, Venetian consul in London in 1449 and Doge of Venice – the elected head of state – in 1485. This portrait was apparently painted while he was in London: he holds a letter addressed to ‘the eminent and distinguished lord...
On display elsewhere