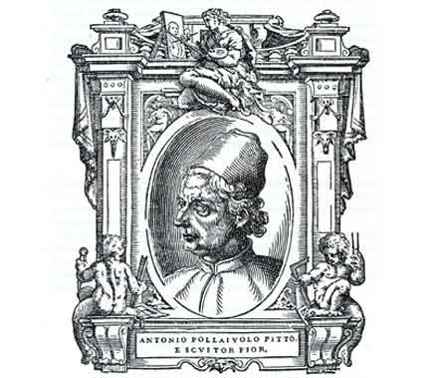 The Florentine brothers Antonio and Piero del Pollaiuolo were born some 10 years apart and started on different paths. Antonio trained as a goldsmith, and as a sculptor in the Ghiberti workshop. Piero trained as a painter, perhaps with Andrea dal Castagno.


Antonio is usually considered the greater artist; he developed design skills which were the basis of the painting and sculpture for which he was famous. Antonio had his own workshop by 1459 and styled himself painter and sculptor. He was, and remains, famous for his work in other media such as designs for embroidery, engraving and enamel-work. His engraving of the 'Battle of the Ten Nudes' was the largest and most influential print of the 15th century, providing models of the male body in action.

The name Pollaiuolo means 'poulterer', which was the occupation of their father, Jacopo di Giovanni Benci.

The Martyrdom of Saint Sebastian
Antonio del Pollaiuolo and Piero del Pollaiuolo
A pale, clean-shaven young man, naked but for a loincloth, is bound to a tree. He gazes towards heaven, seemingly unaffected by the four arrows which pierce his upper body. This Saint Sebastian, a Roman soldier who secretly converted to Christianity and was executed for his faith.This altarpiece...
Room 59