It’s hard to follow what’s going on in this large and busy painting, partly because it’s much darker now than when it was painted. This is one of three battle scenes by Uccello showing the Florentine victory at San Romano in 1432.

The Florentine commander, Niccolò da Tolentino, rides a white charger and wears a magnificent red and gold hat. He leads a cavalry charge from the left, while at the right a knight on a white horse fights off three others.

Uccello was intensely interested in linear perspective – using lines to create an impression of three-dimensional space within a painting – which was a relatively recent discovery. Here he is clearly experimenting: the broken lances in the foreground make a formal grid-like pattern, and scattered pieces of armour are shown at various angles.

It’s hard to follow what’s going on in this large and busy painting, partly because it’s much darker now than when it was painted. This is one of three large battle scenes Paolo Uccello painted in the 1440s; the others are now in the Louvre, Paris and the Uffizi, Florence. All show episodes from the Battle of San Romano on 1 June 1432 – the flowers and oranges here show that it was high summer – an important battle in Florence’s war against Lucca, Milan and Siena over access to the port of Pisa

The three paintings show key moments in the Florentine victory, although we are not sure what order they were meant to be seen in, or in what order they were painted. Our panel shows the Florentine commander Niccolò da Tolentino leading an attack. In the painting now in the Uffizi a knight, possibly the Sienese leader Bernardino della Carda, is unhorsed. The Paris panel shows Florence’s ally, Michelotto Attendolo da Contignola, giving an order to attack.

Battles are notoriously hard to depict, and Uccello has shown not the chaotic reality of a bloody conflict but a formal, almost courtly, scene. Painted some years after the event, the pictures seem more concerned with glorifying the Florentine victory than relating exact events, although some details do seem to be taken from eyewitness accounts. The knights wear field armour intended for war, but details of it are taken from the parade and tournament rather than the battlefield, and their prancing horses seem to have hopped off a carousel rather than out of a stable.

The main character here is Niccolò da Tolentino, riding a white charger at the head of a frenzied mass of horsemen, crests and lances. His personal emblem, the ‘Solomon’s knot’, appears on the banner held by his standard bearer. Although he grasps a baton of command, da Tolentino is not dressed for battle: he has a mail shirt but no steel cuirass (breastplate) over it; his helmet is carried by his page, who rides behind him, apparently indifferent to the brawl around them. Instead of a helmet, da Tolentino wears a magnificent mazzachio, a hat made of velvet cloth of gold. His short cloak is made of the same material. The hat, cloak and baton perhaps recall the gifts given to him by the grateful Florentines after the battle, and his gesture and rearing horse are very similar to contemporary equestrian monuments made for successful military commanders.

Just behind him, partly hidden, is a knight with an extravagant helmet and a surcoat (the tunic worn over his armour) of black and white waves. This is possibly Michelotto Attendolo, who was supposed to have rescued da Tolentino at one point when he was cut off from the rest of the Florentine troops. In the background two knights gallop away up the hillside – perhaps the messengers da Tolentino sent when he realised he was in trouble. At the far right, a knight fends off an attack from three others, in a manoeuvre contemporaries would have recognised from tournaments.

Uccello was fascinated by linear perspective, then a relatively recent discovery. He mixed traditional and modern techniques, using real silver and gold leaf for armour and fabrics, but experimenting with the laws of perspective to impose order on a chaotic scene. The broken lances in the foreground are arranged in a grid-like pattern, but the receding lines are blocked by the hedge rather than vanishing at a single point in the distance. The armour scattered on the ground is shown at various angles, but the foreshortening of the fallen knight’s body is reversed – his shoulders are larger than his feet, so that he looks back to front in comparison with the rest of the painting. It wasn‘t really until Andrea Mantegna was painting in the 1450s that artists worked out how to do perspective properly (look at The Agony in the Garden, for example).

The thick hedge and the rising fields behind could be an attempt to show the battle’s location, which was described as taking place in a long hollow overgrown with vine and brambles. The whole impression, with the milling crowds, the clumsy perspective and rather doll-like horses, is almost more like that of a contemporary tapestry than a painting.

Once sparkling with burnished gold and silver and brilliant colours, the painting’s appearance has altered enormously over time, both from changes in materials and from the damage of repeated cleanings. The silver of the armour has tarnished, the bright vermilion in the knights’ banners and the horses‘ harnesses has turned blue-grey – look at Saint George and the Dragon to get an idea of the original effect – and the green of the hedge has darkened to almost black. The flesh tones on the men’s faces has worn away, leaving green underpaint showing through; both horses and landscape have lost their modelling and now look flat, and glazes of ultramarine over blue areas have been eroded.

Most dramatically it has lost its original arched top, removing the hilltops and sky which must have given it a less claustrophobic feel. All three paintings were designed to be hung high on the walls of a room with a vaulted ceiling. They had irregularly shaped corners designed to fit around corbels, and our painting once had three metallic fixings towards the top, presumably to anchor it to a wall. All were given new corners to change them into rectangles early on, when they were moved from their original location.

Painted for Leonardo Bartolini Salimbeni around the time of his second marriage in 1438, they were forcibly removed from the Salimbeni’s Florentine town house by Lorenzo de’ Medici in 1484, and installed in his private room in the Medici palace. In 1492 they were noted in the inventory of the so-called Camera di Lorenzo, a large room overlooking the garden, where they hung with other battle, hunting and mythological paintings. Lorenzo must have enjoyed the sparkling depiction of former Florentine glories, however unscrupulously obtained. By the end of the sixteenth century they had clearly gone out of fashion: they'd been moved to a corridor near the chapel. 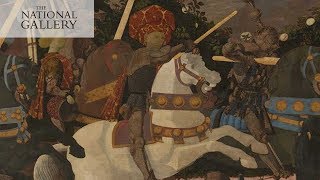 Dr Caroline Campbell, Director of Collections and Research, uncovers the good, the bad and the ugly in Paolo Uccello's 'The Battle of San Romano', as part of our 'Talks for all' series.

Saint George and the Dragon
Paolo Uccello
Saint George taming then slaying a dragon is one of the most fantastic saints‘ legends of the Middle Ages. Uccello has compressed two parts of the story into one small and strange picture. The saint plunges his spear into the head of a dragon, whose odd shape mirrors the entrance to his cave. An...
Not on display