Hans Baldung, who was called Grien, was one of the leading German painters of the early 16th century. He is known for his portraits and secular cabinet pictures as well as for his altarpieces.

He was probably trained by Dürer, and was also an accomplished draughtsman and printmaker. In his treatment of landscape there is an affinity with Altdorfer and the Danube School.

Hans Baldung was born near Strasbourg, where he later settled. He probably trained with Dürer in Nuremberg, before returning to Strasbourg. He then worked at the Baden court and at Freiburg (1512-17), and settled in Strasbourg soon after.

His drawings and prints, like his paintings, show a heightened expressiveness in the tradition of Grünewald, who was active around Strasbourg. 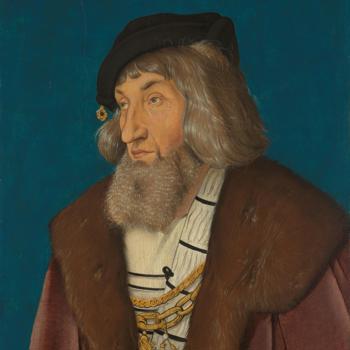 Portrait of a Man
Hans Baldung Grien
Although we do not know his name, we can tell a lot about Baldung Grien’s mature sitter from the details of his costume. The large fur collar of his coat, the jewel on his cap and the two gold chains around his neck show off his wealth. The longer chain bears two badges: the Virgin and Child with...
Room 17 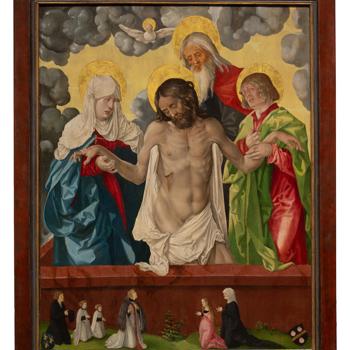 The Trinity and Mystic Pietà
Hans Baldung Grien
The Virgin Mary and Saint John the Evangelist stand in Christ’s red marble tomb supporting his lifeless body. He is partially covered by a burial shroud, but the spear wound on his side is visible. The Virgin mourns her son, wiping her eyes with her veil. John the Evangelist places his hand to hi...
Room 17