The leading artists of this period achieved a fame that has never diminished. Especially in Italy, Renaissance painters sought to rival and surpass the artists of ancient Greece and Rome.

Portraitists were highly prized and pictures of ancient history and mythology became almost as important as Christian subjects. Paintings were appreciated for their artistry as much as for their subject matter, and often placed in specially created galleries. 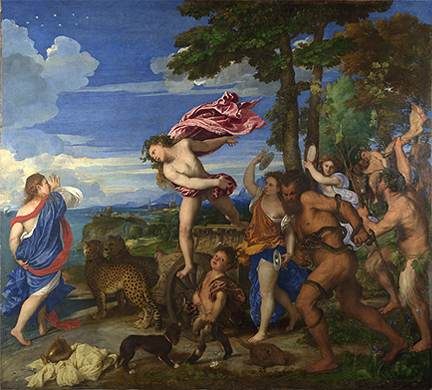 Selected masterpieces from the collection

The Arnolfini Portrait
Jan van Eyck
This must be one of the most famous and intriguing paintings in the world. A richly dressed man and woman stand in a private room. They are probably Giovanni di Nicolao di Arnolfini, an Italian merchant working in Bruges, and his wife.Although the room is totally plausible – as if Jan van Eyck ha...
Room 63
Venus and Mars
Sandro Botticelli
Venus, the goddess of love, looks over at her lover Mars. She is alert and dignified, while he – the god of war – is utterly lost in sleep. He doesn‘t even notice the chubby satyr (half child, half goat) blowing a conch shell in his ear.This picture was probably ordered to celebrate a marriage, a...
Room 58
Doge Leonardo Loredan
Giovanni Bellini
Leonardo Loredan knows that he is being looked at, but he does not return our gaze. He is the doge, the ruler of the Venetian Republic; elected in 1501, he ruled until his death in 1521.He wears white silk damask robes woven with gold and silver metal thread, clothing reserved for the most splend...
Room 55
The Virgin of the Rocks
Leonardo da Vinci
Leonardo’s mysterious painting shows the Virgin Mary with Saint John the Baptist, Christ’s cousin, and an angel. All kneel to adore the infant Christ, who in turn raises his hand to bless them. They are crowded in a grotto overhung with rocks and dense with vegetation.The painting was part of a l...
Room 66
The Madonna of the Pinks ('La Madonna dei Garofani')
Raphael
In this painting, Raphael transforms the familiar subject of the Virgin and Child into something entirely new. The figures are no longer posed stiffly and formally as in paintings by earlier artists, but display all the tender emotions one might expect between a young mother and her child. The pa...
Room 2
Bacchus and Ariadne
Titian
One of the most famous paintings in the National Gallery, Titian’s Bacchus and Ariadne illustrates a story told by the classical authors Ovid and Catullus. The Cretan princess Ariadne has been abandoned on the Greek island of Naxos by Theseus, whose ship sails away in the distance. Bacchus, god o...
Room 10
The Supper at Emmaus
Michelangelo Merisi da Caravaggio
On the third day after the Crucifixion two of Jesus’s disciples were walking to Emmaus when they met the resurrected Christ. They failed to recognise him, but that evening at supper he ‘... took bread, and blessed it, and brake and gave to them. And their eyes were opened, and they knew him; and...
Room 32
Self Portrait at the Age of 34
Rembrandt
This is one of dozens of self portraits by Rembrandt. We see the artist in confident pose – self-assured, dressed in expensive-looking fur and velvet, his hat laced with jewels. But, though he is a Dutchman living in the 1640s, Rembrandt is wearing the clothes of a gentleman of the 1520s and his...
Room 22
A Young Woman standing at a Virginal
Johannes Vermeer
The young woman at the keyboard holds our eye with a direct gaze. The empty chair suggests she is expecting someone and the large painting of a naked Cupid, the god of erotic love, on the wall behind her may be a signal that she is waiting for her lover. Scenes of music making were a popular genr...
Room 27
The Fighting Temeraire
Joseph Mallord William Turner
Turner’s painting shows the final journey of the Temeraire, as the ship is towed from Sheerness in Kent along the river Thames to Rotherhithe in south-east London, where it was to be scrapped. The veteran warship had played a distinguished role in the Battle of Trafalgar in 1805, but by 1838 was...
Room 34
Madame Moitessier
Jean-Auguste-Dominique Ingres
Wearing her finest clothes and jewellery, Madame Moitessier gazes majestically at us. She is the embodiment of luxury and style during the Second Empire, which saw the restoration of the French imperial throne and the extravagant display of wealth. Her distinctive pose is based upon a Roman wall...
Room 45
Sunflowers
Vincent van Gogh
This is one of five versions of Sunflowers on display in museums and galleries across the world. Van Gogh made the paintings to decorate his house in Arles in readiness for a visit from his friend and fellow artist, Paul Gauguin.‘The sunflower is mine’, Van Gogh once declared, and it is clear tha...
Room 43