During the 18th century it was common for artists to travel, both to seek inspiration and embrace opportunity. Claude-Joseph Vernet was the most celebrated French view painter of the period. In 1734 he relocated to Rome, where he spent almost 20 years and earned an international reputation. Vernet’s view paintings (or ‘vedute’) were particularly sought after by travellers on the and European rulers. His contrasting pair of paintings, A Landscape at Sunset and A Shipwreck in Stormy Seas, were originally commissioned for the King of Poland, Stanislaus Augustus Poniatowski (1732–1798), whose official court painter at the time was Bernardo Bellotto. Having trained with his uncle Canaletto in Venice, Bellotto went on to enjoy a successful career at the royal courts in Dresden, Vienna, Munich and Warsaw, glorifying the great capitals of Europe through his highly original topographical views.

Portrait of John Scott (?) of Banks Fee
Pompeo Girolamo Batoni
This is traditionally said to be a portrait of the Englishman John Scott, who bought the estate at Banks Fee, near Stow-on-the-Wold in Gloucestershire, in 1753. During the early 1770s – around the same time as this work was produced – Scott did travel to Rome, where the famous portraitist Batoni...
Room 40
Pan and Syrinx
François Boucher
This small and intimate painting is a cabinet picture intended for private domestic display rather than public exhibition. It illustrates a story from Metamorphoses, the epic poem by the Roman poet Ovid. The wood nymph Syrinx is chased by the god Pan to the river Ladon, where she begs one of the...
Room 40
The Baron de Besenval in his Salon
Henri-Pierre Danloux
Pierre-Joseph-Victor de Besenval was an eminent military man and art collector. His association with the circle around Queen Marie Antoinette prompted his flight to his native Switzerland in 1789, during the French Revolution, but he was arrested while fleeing. He avoided the guillotine and was r...
Room 40
A Picnic
Francisco de Goya
Goya adds a satirical twist to this supposedly innocent scene. It seems that a romantic outing has gone terribly wrong. The remains of a picnic lie on the tablecloth: pieces of bread, two almost-empty plates and bottles of wine. To the right, a man appears to be unwell, probably from drinking too...
Room 40
A Scene from 'The Forcibly Bewitched'
Francisco de Goya
Goya shows us a scene based on a satirical play first performed in 1698: The Forcibly Bewitched. The priest, Don Camillo, is being frightened into marriage with Doña Leonora. He’s been made to believe that a slave, Lucia, has bewitched him, and that his life will last only as long as the lamp in...
Room 40
A Girl
Jean-Baptiste Greuze
A young girl in three-quarters view looks up and out of the picture to the left. Her transparent shawl, known as a fichu, covers one shoulder but has fallen off the other. Her white muslin dress is only loosely held up over her chest, an effect enhanced by her bodice having come undone. There was...
Room 40
Maternal Affection
Louis Jean François Lagrenée
In this exquisite small painting on copper, three women are looking after two infants in a grand neoclassical setting. One woman breastfeeds an infant, while another holds up a second baby for a kiss. A woman to the left is busy arranging bedding in a wooden cradle. The open loggia and warm light...
Room 40
The Four Ages of Man: Adolescence
Nicolas Lancret
This is the second of Lancret’s series of paintings depicting The Four Ages of Man and represents Adolescence (L'Adolescence).A young lady stands in the centre of the painting in a grand circular room with tall windows. She admires herself in the mirror held up by a young page while her hair is d...
Room 40
The Four Ages of Man: Childhood
Nicolas Lancret
This is the first of Lancret’s series of paintings depicting The Four Ages of Man.Ten wealthy children, a baby, a nurse and a governess are outside in a tiled neoclassical loggia. Two of the children are being taught to read by the governess, while the others are playing boisterous games. A boy a...
Room 40
The Four Ages of Man: Old Age
Nicolas Lancret
This is the fourth and final painting in Lancret’s series of The Four Ages of Man, entitled Old Age (La Vieillesse). Lancret dispensed with the usual depiction of old people warming themselves indoors before an open fire to take the scene outdoors. A young woman rejects an old man’s advances whil...
Room 40
The Four Ages of Man: Youth
Nicolas Lancret
This is the third of Lancret’s series of paintings depicting The Four Ages of Man and represents Youth (La Jeunesse).Three pairs of lovers embrace one another in a woodland glade. In the foreground, two archers are engaged in a game of ‘pape-guay’, which involves shooting at an imitation bird (us...
Room 40
Manon Balletti
Jean-Marc Nattier
Maria Maddalena Balletti, known as Manon Balletti, was the daughter of Antonio Giuseppe Balletti, an actor in the Comédie Italienne. Her brother Stefano, also an actor, was friends with the Venetian adventurer and author Giacomo Casanova, who declared his love for Manon. She broke off her existin...
Room 40 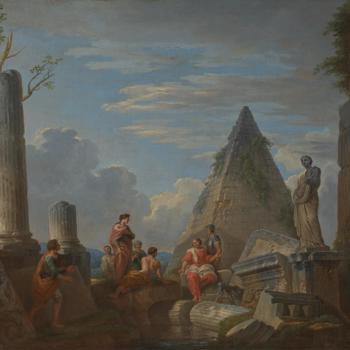 Roman Ruins with Figures
Giovanni Paolo Panini
Panini painted a number of imaginary scenes in which a known monument is set within a fanciful arrangement of ruins. The crumbling stone pyramid here is based on the tomb of Caius Cestius in Rome, but all of the other elements are invented. Remnants of the city’s classical past fill the foregroun...
Room 40
The Lottery in Piazza di Montecitorio
Giovanni Paolo Panini
This monumental painting shows a large crowd awaiting the results of a lottery draw, which is taking place on the balcony of the Palazzo di Montecitorio in Rome. A man has released the winning ticket into the air – you can just make out a small piece of paper fluttering towards the excited group...
Room 40
A Landscape at Sunset
Claude-Joseph Vernet
This is one of two paintings originally commissioned as a pair by Stanislas Augustus, King of Poland, in June or July 1772. However, concerned that the King was slow to pay, Vernet instead sold the pictures to the British officer and East India Company official Lord Clive (known as Clive of India...
Room 40
A Shipwreck in Stormy Seas
Claude-Joseph Vernet
This is one of a pair of seascapes, originally commissioned on behalf of the King of Poland, that the British officer and East India Company official Lord Clive (known as Clive of India) bought from Vernet in 1773.Originally known as ‘Tempête’ (Storm), it depicts a rocky shoreline buffeted by a v...
Room 40
The Scale of Love
Jean-Antoine Watteau
This picture is a fine example of Watteau’s work on an intimate scale. The title The Scale of Love (La Gamme d’Amour) comes from a print of it made several years after his death. It may be a reference to the musical scale, to the various stages of flirting and seduction, or to the music which fac...
Room 40