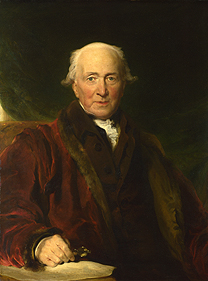 The first paintings in the National Gallery collection came from the financier and collector John Julius Angerstein. They consisted of Italian works, including a large altarpiece by Sebastiano del Piombo, The Raising of Lazarus, and fine examples of the Dutch, Flemish and English Schools.

In 1823 the landscape painter and art collector, Sir George Beaumont (1753 – 1827), promised his collection of pictures to the nation, on the condition that suitable accommodation could be provided for their display and conservation.

The gift of the pictures was made in 1826. They went on display alongside Angerstein's pictures in Pall Mall until the whole collection was moved to Trafalgar Square in 1838.

Deciding what to collect

Initially, the Gallery had no formal collection policy, and new pictures were acquired according to the personal tastes of the Trustees. By the 1850s the Trustees were being criticised for neglecting to purchase works of the earlier Italian Schools, then known as the Primitives.

Following the reform of Gallery administration in 1855, the new Director travelled throughout Europe to purchase works for the Gallery. In the 10 years that he was Director, Sir Charles Eastlake ensured that the Gallery's collection of Italian painting expanded and widened in scope to become one of the best in the world.

Eastlake's purchases included Botticelli's Adoration of the Kings and Uccello's, The Battle of San Romano. 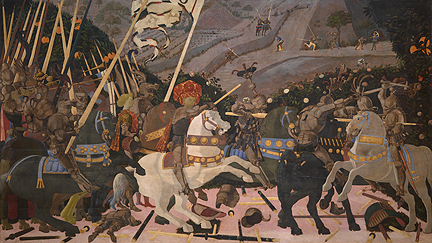 Uccello, The Battle of San Romano, probably about 1438-40

In 1871 the Gallery's collection was broadened yet further, when 77 paintings were bought from the collection of the late Prime Minister, Sir Robert Peel. These consisted mainly of Dutch and Flemish paintings, and included Hobbema's The Avenue at Middleharnis. 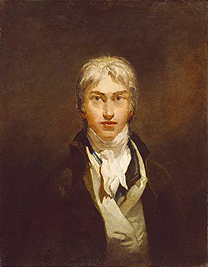 When Robert Vernon presented a large gift of British works to the Gallery in 1847, they had to be displayed elsewhere: first at Vernon's private house, and later at Marlborough House.

Not long afterwards, the artist Joseph Mallord William Turner bequeathed over 1000 paintings, drawings and watercolours. When they came into the collection in 1856, they had to be displayed at South Kensington, along with the Vernon collection, which was moved from Marlborough House.

In 1876 the National Gallery was enlarged, and the paintings were returned to Trafalgar Square. However, by this time a precedent had been set for exhibiting British works in separate premises.

Read the full feature about The Turner Bequest

In 1889 the wealthy industrialist, Henry Tate, offered his collection to the nation. He subsequently offered to fund the construction of a separate Gallery for British works of art. After lengthy negotiations, a site was selected a mile away from Trafalgar Square, at Millbank, and the Gallery opened in 1897.

At first, the Tate Gallery was under the administration of the National Gallery. In 1955 the Tate was formally established as an independent institution.