This is one of five versions of Sunflowers on display in museums and galleries across the world. Van Gogh made the paintings to decorate his house in Arles in readiness for a visit from his friend and fellow artist, Paul Gauguin.

‘The sunflower is mine’, Van Gogh once declared, and it is clear that the flower had various meanings for him. The different stages in the sunflower’s life cycle shown here, from young bud through to maturity and eventual decay, follow in the vanitas tradition of Dutch seventeenth-century flower paintings, which emphasise the transient nature of human actions. The sunflowers were perhaps also intended to be a symbol of friendship and a celebration of the beauty and vitality of nature.

The sunflower pictures were among the first paintings Van Gogh produced in Arles that show his signature expressive style. No other artist has been so closely associated with a specific flower, and these pictures are among Van Gogh’s most iconic and best-loved works.

‘The sunflower is mine’, Van Gogh once declared. Soon after his death he became known as the painter of sunflowers, an identification that endures to this day. No other artist has been so closely associated with a specific flower, and his sunflower pictures continue to be among Van Gogh’s most iconic – and loved – works.

This painting is one of five versions of Sunflowers on display in museums and galleries across the world, although Van Gogh painted seven versions in total between 1888 and 1889. Of the seven, one is in a private collection and has not been exhibited for generations. The other, bought by a Japanese collector in 1921, was destroyed during the Second World War. In addition to the National Gallery’s painting, the four other versions on public display are in the Van Gogh Museum in Amsterdam, the Neue Pinakothek in Munich, the Philadelphia Museum of Art and the Sompo Museum in Tokyo.

The seven pictures were made in two groups: four were painted in August 1888 and three replicas were painted in January 1889, which Van Gogh described as ‘absolutely equal and identical copies’. These copies, along with the original paintings, were to be used as side panels to versions of his portrait of Madame Roulin, the wife of the Arles postman. Van Gogh painted the first four versions of his sunflowers in just one week. He worked quickly before the flowers faded, writing to his brother Theo, ‘I am painting with the gusto of a Marseillaise eating bouillabaisse ... If I carry out this idea there will be a dozen panels. So the whole thing will be a symphony in blue and yellow.’ The first two paintings to be completed were the one now in a private collection and the painting destroyed by bombing. The second two paintings – Fourteen Sunflowers (Munich) and the National Gallery’s picture – are the most important of the series. Van Gogh considered both good enough to hang and signed them ‘Vincent’, using his first name only as people found it difficult to pronounce his last name. They were also among the few works he felt confident enough to exhibit in Brussels in November 1889.

Van Gogh had previously painted sunflower still lifes, but was prompted to paint this series by the imminent arrival of Paul Gauguin, his friend and fellow artist, at the ‘Yellow House’, his rented home in Arles. Van Gogh was anxious to please his guest, who arrived on 23 October, and he knew Gauguin liked his sunflower pictures. As he explained to Theo, ‘I would like to do a decoration for the studio. Nothing but large Sunflowers’ (although he changed his plans and hung two pictures – this one and the Munich painting – in the guest room which Gauguin was to use). Van Gogh hoped that Gauguin’s arrival would be the first step in forming a new ‘association’ of like-minded artists, a ‘Studio in the South’. However, following a fight on 23 December, when Van Gogh threatened Gauguin with a knife and then cut off part of his own left ear, Gauguin returned to Paris. Although the friends never saw each other again, they continued to write, and in one letter Gauguin asked Van Gogh to make a sunflower painting for him. While living with Van Gogh, Gauguin painted the portrait Van Gogh Painting Sunflowers (Van Gogh Museum, Amsterdam). The scene was imagined, as the sunflower season was over and Van Gogh did not work on his sunflower pictures at all during the two months Gauguin was in Arles.

Gauguin may have admired Van Gogh’s sunflowers – in 1887 he had exchanged one of his Martinique landscapes for two of Van Gogh’s small sunflower studies – and yellow may have been his favourite colour, but the flower also had significance for Van Gogh himself. In this painting the 15 sunflowers are in different stages of their life cycle, from young bud through to maturity and eventual decay and death. The bud in the lower left corner has yet to reach full flower, seven flowers are in full bloom and the other seven have lost their petals and are turning to seed. Van Gogh has brilliantly captured the textures of the flowers in these various stages. Long strokes follow the direction of the petals, leaves and stems, whose sinuous lines echo those of Art Nouveau; small raised dabs of stippled paint imitate the bristling seed heads. Here, especially, Van Gogh exploited the stiff consistency of the new oil paints introduced in the nineteenth century to create thick impasto effects.

The sunflowers’ life cycle follows the vanitas tradition of seventeenth-century Dutch flower painting, but the sunflower had also been associated with love, both sacred and profane, since the sixteenth century. This was because just as the sunflower turns to follow the sun, so the true believer follows Christ and the lover follows the object of their affection. This idea could be extended to other instances of devotion, such as the subject who follows a leader or to the notion of art following nature. For Van Gogh, the sunflower’s association with art and love may have included the idea of artistic friendship or partnership, which he hoped to forge with Gauguin. The sunflower may also have had even more personal meanings for him. In February 1890 he wrote to the critic Albert Aurier, suggesting that the two sunflower pictures he was exhibiting in Brussels (the Munich and London versions) might ‘express the idea symbolising "gratitude".’ Symbolism aside, sunflowers were also visually striking examples of the beauty and vitality of nature, with which Van Gogh had always had a strong bond.

The paintings were also important artistic statements, not least because they were among the first paintings Van Gogh produced in Arles that show his signature expressive style. In this painting Van Gogh limited his palette to just one primary colour – ‘a picture all in yellow’ as he described it – although yellow here ranges from rich orange ochre to the pale greenish yellow of the background. Yellow could signify happiness for Van Gogh, and it was also the colour of Provence and a tribute to the Provençal painter Monticelli who ‘depicted the south [of France] all in yellow, all in orange, all in sulphur’. Van Gogh, too, has created a similar effect of incandescent heat, particularly with the circular seed heads, which seem to stand in for the sun itself. 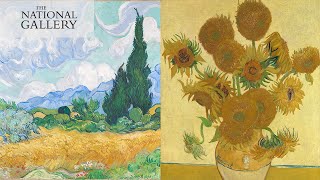 Special Projects curator Colin Wiggins walks you through the life and work of Vincent van Gogh, from the bright colours of 'Sunflowers' to his battles with depression. Discover Van Gogh's changing style and the influence of the Post-Impressionist art...

A Wheatfield, with Cypresses
Vincent van Gogh
Van Gogh painted several versions of A Wheatfield, with Cypresses during the summer of 1889, while he was a patient in the psychiatric hospital of Saint-Paul de Mausole, in the village of St-Rémy in the south of France. A first version, which he described as a study, was painted on site in late J...
Room 43
Farms near Auvers
Vincent van Gogh
Not on display
Head of a Peasant Woman
Vincent van Gogh
In late 1883 Van Gogh moved to the town of Nuenen in North Brabant, in the south of the Netherlands. His arrival there marked the beginning of a highly productive period that was to culminate in his first major painting, The Potato Eaters of 1885 (Van Gogh Museum, Amsterdam).This picture belongs...
Not on display
Long Grass with Butterflies
Vincent van Gogh
Van Gogh painted this patch of meadow when he was a patient at the psychiatric hospital at Saint-Paul de Mausole, near the village of St-Rémy in the south of France. While at the hospital he made a number of sketches and paintings that look down at small areas of meadow or undergrowth.Although th...
Room 43
Two Crabs
Vincent van Gogh
Room 43
Van Gogh's Chair
Vincent van Gogh
This painting of a simple chair set on a bare floor of terracotta tiles is one of Van Gogh’s most iconic images. It was painted in late 1888, soon after fellow artist Paul Gauguin had joined him in Arles in the south of France. The picture was a pair to another painting, Gauguin’s Chair (Van Gogh...
Room 43