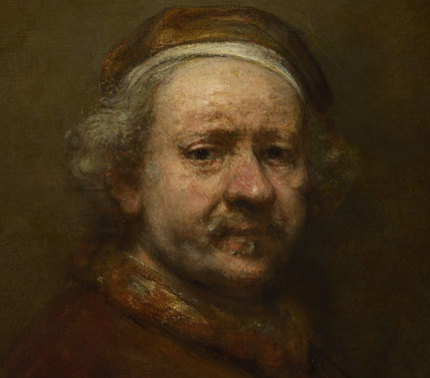 Rembrandt Harmenszoon van Rijn was born in Leiden in the Netherlands in 1606. His father was a miller, comfortably off and able to send Rembrandt to the town's Latin School. At the age of 14, Rembrandt began studying at the famous University of Leiden (unusual for a miller's son), but academic life did not suit him. After a few months he left to begin an apprenticeship as a painter.

Leiden did not offer much in the way of artistic talent, and in 1624, after three years with a local painter, Rembrandt went to Amsterdam to study briefly with Pieter Lastman. He then moved back to Leiden and set up as an independent painter, sharing a workshop with Jan Lievens. It was not an easy climate in which to work. Following the Protestant Reformation, the local churches no longer provided artists with any commissions as the Catholic church did in other countries. As a consequence artists had to concentrate on commissions from private individuals. Rembrandt quickly began to make a name for himself as a painter of historical subjects.

Unusually, Rembrandt did not follow the advice that was given to young painters, namely to travel to Italy to study Italian art first hand. Instead he felt that he could learn everything he needed to from the art available in his native country.

In around 1631, Rembrandt moved to Amsterdam, the most prosperous port in northern Europe, and 'crowded with merchants from every nation'. It offered a young and successful artist far more opportunities than sleepy Leiden.

Rembrandt lodged in the house of an art dealer called Hendrick van Uylenburgh, and while there, he met his landlord's young cousin Saskia. They were married in 1634. The numerous paintings and drawings of her suggest the two were very happily married. In 1636, Saskia gave birth to their first son, Rumbartus. He died after only two weeks. Over the next four years two more children were born, but died within a couple of months.

Professionally, Rembrandt went from strength to strength. The most important families and organisations in the city commissioned paintings. As well as portraits, he produced baroque history paintings such as Belshazzar's Feast. Cash flow was sometimes a problem – and Rembrandt's cash flowed rather freely. He was a compulsive buyer of art, and a collector of all manner of antiquities, props, and weapons to be used in paintings. Saskia's family accused him of squandering her fortune. But Rembrandt was the most famous artist in the city. What could go wrong?

In 1639, Rembrandt and Saskia moved into a grander house, next to his old friend van Uylenburgh. He sketched endlessly - people on the street, beggars, circuses, women and children, Saskia. His painting was influenced by new developments in Italian art which reached the Netherlands via prints, and via his more travelled colleagues. Many of his contemporaries had started to experiment with the dramatic use of lighting developed by Caravaggio.

The influence of Caravaggio is evident in Rembrandt's work from the 1630s. He developed a new way of describing faces with patterns of light and shadow, rather than simply lighting one side and shading the other. Shadows around the eyes of his portraits, making it hard to read a precise expression give his canvases the extraordinary impression of the living, thinking mind behind the face.

In 1641 a fourth child, Titus, was born. And lived. Saskia was unwell after the birth and Rembrandt made various drawings of her looking tired and drawn in bed. In 1642, Saskia made a will leaving Rembrandt and Titus her fortune, although most of Rembrandt's share would be lost if he married. She died shortly after, still aged only 30, probably from plague or TB.

Alone with a baby to care for, Rembrandt had to employ a nurse and took on a widow called Geertge Dircx. She became his common law wife for a short time, but then he took on another servant, Hendrickje Stoffels, and fell in love with her. Geertge took Rembrandt to court on the grounds that he had promised to marry her. He charged her with pawning some of Saskia's jewellery that she had left to Titus in her will. After much bitter wrangling, Rembrandt somehow had her sent to a house of correction. Meanwhile he and Hendrickje lived happily together, except that the terms of Saskia's will meant that he couldn't afford to marry her. She appears in numerous paintings, and may have been the model for A Woman Bathing.

One notable aspect of his later paintings is the use of broad brushstrokes, sometimes applied with a palette knife. While the earlier pictures had a smooth finish, the later works are designed to work only from a distance.

In the 1650s Amsterdam was hit by a massive economic depression. Rembrandt had not even completed half the payments on his house and his creditors began to chase him for money.

In July 1656, he successfully applied for 'cessio bonorum' - a respectable form of bankruptcy which avoided imprisonment. All his goods, including an impressive collection of paintings, were sold off for a pittance. Rembrandt, Titus and Hendkrickje moved across town to a much poorer district, where Rembrandt continued to paint. He had always used himself as a model, but in the last twenty years of his life he painted self portraits with increasing frequency. In 1663, Hendrickje died after a long illness. Titus was left to look after his father. Continued money problems forced them to sell Saskia's tomb, but still Rembrandt could not resist putting in an offer for a Holbein that came up for sale.

Titus married in 1668 the daughter of an old family friend, then seven months later, he died. A daughter, Titia, was born six months later. In 1669, Rembrandt himself died and was buried in the Westerkerk next to Hendrickje and Titus. There was no official notice of his death.