This is one of dozens of self portraits by Rembrandt. We see the artist in confident pose – self-assured, dressed in expensive-looking fur and velvet, his hat laced with jewels. But, though he is a Dutchman living in the 1640s, Rembrandt is wearing the clothes of a gentleman of the 1520s and his pose is based on paintings by Dürer, Titian and Raphael from a similar date. So, as the subject of the painting, Rembrandt is portraying himself as a Renaissance gentleman, and as the artist he is both paying homage to and directly comparing himself with the most famous artists of that time.

The implications of this double echo would certainly have been understood by Rembrandt’s sophisticated clientele. By taking the pose and clothes of a gentleman he was claiming a much higher social status than was usually afforded to artists at the time. And by citing the works of three of the greatest Renaissance painters, he is implying that he is their equal.

This is one of Rembrandt’s most famous self portraits, but it is also a painting concerned with history and illusion. We see the artist in confident pose clearly relishing his success. If you had money and taste in Amsterdam of the 1640s and you wanted to commission a fashionable portrait, Rembrandt’s flourishing workshop would have been high on your list.

In this painting, probably made for just such a client, he looks to us as he would have done to them – self-assured, dressed in expensive-looking fur and velvet, his hat laced with jewels. But his contemporaries would have noticed something we don’t: his costume may be impressive, but it is very old-fashioned. Rembrandt – though he is a Dutchman living in the 1640s – is wearing the clothes of a wealthy gentleman of the 1520s.

This fancy dress is not the only reference to the past. Rembrandt is also using an age-old artist’s trick or illusion. The wall or parapet at the bottom of the painting is much more than a prop to emphasise the confident nonchalance of his pose. It deepens the perspective, making it seem less like a flat picture and more like a window onto reality. And strangely, while creating a barrier between the sitter and the viewer, it also unites our two worlds: the way that Rembrandt’s elbow and the swirl of his cloak extend forwards over the wall creates the illusion that they share the same space as the viewer. X-ray images show that originally his left hand was also resting on the wall; by drawing it back and tucking it into his cloak, Rembrandt has made himself just slightly more aloof.

This trick of perspective seems to be a reference to some of the great paintings of the Renaissance. Rembrandt appears to have derived the positions of the parapet and the arm from a portrait by Titian, and there are strong echoes too of a self portrait by Dürer of 1498. Copies were almost certainly available, but both paintings were in Amsterdam at least briefly in the 1630s, so Rembrandt may have studied them then. Meanwhile, the shape of the figure and the colours used are similar to a portrait by Raphael (painted before 1516) which Rembrandt had seen and sketched the previous year.

The reference to Titian’s portrait is particularly interesting, because it was then believed to be of Ludovico Ariosto, one of the most celebrated Italian poets of the Renaissance. So, as the subject of the painting, Rembrandt is portraying himself both as a Renaissance gentleman and, perhaps, a poet from a previous century. At the same time, as an artist he is paying homage to and directly comparing himself with Raphael, Titian and Dürer. The implications of this double echo would certainly have been understood by Rembrandt’s sophisticated clientele. By taking the pose and clothes of a gentleman he was claiming a much higher social status than was usually afforded to artists at the time, a claim emphasised by the reference to a famous poet. And by citing the works of three of the greatest Renaissance painters, he is implying that he is their rightful heir and equal.

He also seems to be asserting his mastery by demonstrating his ability to emulate the smooth and meticulous finish of his Renaissance predecessors – a style quite different to his usual energetic brushstrokes. You can still find one typical Rembrandt touch in the painting, however. Look closely at the back of his neck: a handful of lighter streaks show where he has scratched some of the hairs in the wet paint with the pointed end of the brush handle.

Self Portrait at the Age of 34 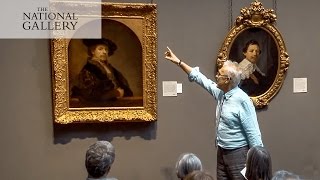 Freelance lecturer James Heard talks you through Rembrandt's illustrious and prolific career, from the successes of his early years in Amsterdam, to his later bankruptcy and the power of his self-portraits.