One of the most famous paintings in the National Gallery, Titian’s Bacchus and Ariadne illustrates a story told by the classical authors Ovid and Catullus. The Cretan princess Ariadne has been abandoned on the Greek island of Naxos by Theseus, whose ship sails away in the distance. Bacchus, god of wine, falls in love at first sight with Ariadne and leaps from his chariot towards her. Later, Bacchus throws Ariadne’s crown into the air, immortalising her as the constellation Corona Borealis, represented by the stars above her head.

This painting is one of a celebrated series by Giovanni Bellini, Titian and the Ferrarese artist Dosso Dossi, commissioned for the Camerino d‘Alabastro (Alabaster Room) in the Ducal Palace, Ferrara, by Alfonso I d’Este, Duke of Ferrara. All the pictures, completed from 1514 to 1525, are bacchanals – scenes of hedonism, drinking, music making and lovemaking. Titian shows off his great skill as a colourist, combining in this single picture all of the purest and most vibrant pigments available at that time.

Titian’s Bacchus and Ariadne is one of the finest and most famous paintings in the National Gallery. The Cretan princess Ariadne has been abandoned on the Greek island of Naxos by Theseus, whose ship is shown in the distance, at lower left. Bacchus, god of wine, is returning from a triumphal visit to India accompanied by his rowdy throng of followers: music-making nymphs clash cymbals and tambourines, a satyr wreathed with vine leaves holds a calf’s leg aloft and a satyr child drags the calf’s head along the ground. Drunken Silenus rides behind, slumped on an ass.

Titian has captured the moment when Bacchus falls in love at first sight with Ariadne. The god leaps from his cheetah-drawn chariot; we see him suspended in mid-air in a way only rarely attempted by previous artists. Ariadne is initially afraid of Bacchus but he literally promises her the stars: in one version of the story, he later throws her wedding crown into the air, immortalising her as the constellation Corona Borealis, represented in the painting by the stars above her head.

The story of Bacchus and Ariadne is told in different versions by several classical poets, most significantly Ovid and Catullus. From Catullus, Titian took the description of Ariadne deserted on the shore of Naxos and the wild train of Bacchus; from Ovid the meeting between the desperate, dishevelled, barefoot heroine and the young god.

The painting is one of a famous series by Bellini, Titian and the Ferrarese artist Dosso Dossi, commissioned for the Camerino d‘Alabastro (Alabaster Room) in the Ducal Palace, Ferrara, by Alfonso I d’Este, Duke of Ferrara. The Duke sent canvases of the right size to Titian in Venice so that the finished paintings would fit exactly in their intended location. It is not certain where exactly the Camerino was in the palace or how the works were arranged within it. However, it was probably a small room, and Bacchus and Ariadne is full of details which could be relished when the painting was examined closely. The landscape, the composition and its direction were calculated by Titian in relation to the other paintings in the room. Dosso’s Bacchanal with Vulcan is now lost; he also contributed ten oblong canvases depicting scenes from Virgil’s Aeneid that probably formed a frieze above the main canvases.

The scheme was probably devised by a humanist scholar in the service of the Duke of Ferrara, who in around 1510 tried to include Michelangelo, Raphael and Fra Bartolommeo among the contributors. Bellini’s Feast of the Gods (National Gallery of Art, Washington) for this room is dated 1514 and was later reworked by Titian, after he had finished his three paintings – The Worship of Venus (Prado, Madrid), Bacchus and Ariadne and the Bacchanal of the Andrians (Prado, Madrid) were painted 1518–25. Titian began Bacchus and Ariadne in Venice in 1520 or 1522 and finished it at Ferrara early in 1523.

Titian’s Bacchus and Ariadne was a substitute for a painting on a similar subject which the Duke had commissioned from Raphael, who had died in 1520. Titian self-consciously attempted to emulate, and perhaps outdo, Raphael by drawing inspiration from classical sculpture, and depicting authentically classical costumes. He based the figure tangled in writhing snakes on the recently discovered and instantly famous ancient Roman sculpture of Laocoön, excavated in Rome in 1506 (Vatican Museums, Rome).

Titian shows off his great skill as a colourist in this picture, combining in a single canvas all the most vibrant pigments available in Venice at the time. He didn't just use the finest quality pigments, but he also used them in their purest form, unmixed except with white to brighten them. He employed each pigment separately in large areas of colour, keeping them well spaced within the picture, and using them all at full strength to give the painting its rich, jewel-like quality. The ultramarine blue in the sky is the most intense colour and the purest pigment. The strength of blue in the sky varies as it does in nature, being more deeply blue overhead and brighter toward the horizon. The sky blue is differentiated from the slightly greenish blue of the distant landscape, painted with the pigment azurite.

Titian’s juxtaposition of strongly contrasting colours intensifies them, and his use of oil-rich glazes gives his colours greater depth. Yet the overall effect is harmonious. The different flesh tones – from the pallor of Ariadne to the dark russet of the satyr with the snakes – are picked up across the picture, providing a unifying link. The orange-brown tree in the top right corner is painted in ochre (iron oxide) colours. It was always intended to be rusty brown even though this is not an autumn landscape – the iris, columbine and tender young vine shoots are more typical of late spring or early summer. Titian may have introduced the brown tree to provide a patch of warm contrasting colour at the top corner of the picture, and to continue the strong diagonal sweep through the earthy colours of the bodies down to the brown cheetahs, so drawing our eyes to Ariadne.

He also exploited the textural qualities of the paint itself to add interest and variety to the areas of pure colour. The folds of the pale yellow drapery beneath the urn on which he signed his name are modelled with the brushstrokes rather than painted shadows. Titian became increasingly interested in the textural possibilities of paint, culminating in late works such as The Death of Actaeon, in which differentiated colour plays a lesser role in the composition than the texture and dynamism of the brushwork.

Bacchus and Ariadne had an important influence on European art. The loves of the gods ceased to be a subject chiefly associated with furniture decoration and villa frescoes and became the most popular subject for gallery pictures, most notably in the poesie, the narrative paintings based on the Metamorphoses of Ovid, which Titian himself began to paint for King Philip II of Spain over 20 years later. Diana and Actaeon, Diana and Callisto and the Death of Actaeon from that series are now in the National Gallery’s collection. 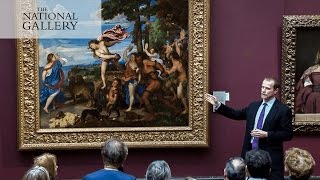