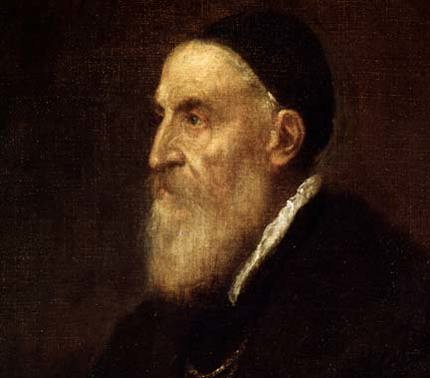 Titian was the greatest painter of 16th-century Venice, and the first painter to have a mainly international clientele. During his long career, he experimented with many different styles of painting which embody the development of art during his epoch.

Titian (Tiziano Vecellio) was born in Pieve di Cadore, a small town at the foot of the Dolomites on the Venetian side of the Alps. The Vecellios had been based in Cadore since the 14th century. Titian’s father, Gregorio, was a military man. His older brother Francesco was also a painter. There is still no documentary evidence of Titian’s exact date of birth, but contemporary sources and his early stylistic development suggest that he was born around 1490.

When he was about 10 years old, Titian arrived in Venice, then one of the wealthiest and most cosmopolitan cities in the world.

Titian started his artistic training in the workshop of the mosaicist Sebastiano Zuccato. He later briefly joined Gentile Bellini’s workshop. After Gentile’s death in 1507, Titian joined the workshop of Gentile's brother, Giovanni Bellini, which at that time was the most important in Venice.

However, it was through contact with Giorgione, who had also previously trained in Giovanni Bellini’s workshop, that he mainly developed his early style. The Giorgionesque appearance of Titian’s early work, which is characterised by a pastoral mood, is proof of their closeness. In 1508-9 they worked together on the decoration of the external walls of the ‘Fondaco dei Tedeschi’ in Venice. The parts executed by Titian were greatly praised by contemporaries, much to the annoyance of Giorgione.

After Giorgione’s death in 1510, and Sebastiano del Piombo’s departure to Rome in 1511, Titian launched his independent career in Venice. He was now left without rivals among his generation who could compete at his level.

In 1511 Titian painted his celebrated frescoes in the ‘Scuola del Santo’ in Padua. His style had now reached maturity, marked by fullness of forms, compositional confidence and chromatic balance. These features made his work fundamental to the development of Venetian – and also European – painting.

He became famous as a portraitist (examples in the National Gallery are La Schiavona and Portrait of Gerolamo (?) Barbarigo). He was also known as a painter of various profane subjects. These skills drew the attention of intellectually ambitious Italian dukes and aristocrats.

Titian was also commissioned to paint prestigious public religious paintings. His Venetian success was sealed by the execution of the altarpiece for the high altar of the important Franciscan church of Santa Maria Gloriosa dei Frari in Venice. The so-called ‘Assunta’ (Assumption of the Virgin Mary), which is nearly seven metres high, was displayed in 1518, creating a revolutionary watershed in Venetian altarpiece design.

Between 1519 and 1526, he painted the celebrated ‘Pala Pesaro’ for the same church. This asymmetrical composition strongly influenced Venetian altarpiece painting right up until the 18th century.

Early in 1516 Titian started his professional relationship with Alfonso I d’Este, Duke of Ferrara and spent time in Alfonso’s castle. The duke wanted to create a private cabinet, which would be known as the ‘camerino d’alabastro’ (the alabaster cabinet), with mythological scenes derived from classical poetry.

The duke employed the painters he considered to be the best at the time. Apart from Titian, the other artists were Raphael, Fra Bartolomeo and Dosso Dossi. Following the deaths of Raphael and Fra Bartolomeo Titian’s involvement in the project increased. He then executed his two famous Bacchanals for Alfonso I, today in the Prado, Madrid, along with Bacchus and Ariadne, now in the National Gallery.

Titian also worked for the court of Mantua. In 1523 he began painting for the future Duke of Mantua, Federico II Gonzaga the son of Isabella d’Este (who was the sister of Titian’s earlier patron Alfonso I). Titian mainly painted portraits for the Mantuan court.

In 1532 Titian started to work for the Duke of Urbino, Francesco Maria della Rovere. He would also work for his successor, Guidobaldo II. In the 1530s, he was also in touch with the court of Pope Paolo III Farnese.

The 1520s were hugely significant for Titian’s private life. In 1525 he married Cecilia (who tragically died in 1530). Titian and Cecilia had three children, who were all given the names of famous figures from ancient Rome: Pompeo, Orazio and Lavinia.

Titian’s meeting with the Holy Roman Emperor Charles V in Bologna in 1530 would be a determining event in his life. On this occasion Titian executed a (now lost) full-length, life-size portrait of the Emperor - an early example of what was still an extremely innovative genre at that time.

He rapidly became the principal painter to the imperial court, which gave him immense privileges, honours and even titles. From this moment he was the painter most in demand at courts across Europe. Titian also became the official painter of Charles V’s son, Philip II of Spain. Starting in about 1551, he painted the celebrated mythological series of pictures for Philip, which he referred to as ‘poesie’.

The 'poesie' included Diana and Actaeon and Diana and Callisto, which are now part of the National Gallery's collection, along with The Death of Actaeon, which was originally conceived as part of the series, but in fact remained unfinished in the artist's studio at his death.

In 1527 the Florentine sculptor and architect Jacopo Sansovino and the Tuscan man of letters Pietro Aretino arrived in Venice. They became inseparable friends with Titian, stimulating his interest in Mannerism, a style first seen in his paintings from that period. Mannerist aspects in his art increased after his only trip to Rome in 1545-6, where he finally got the opportunity to meet Michelangelo.

The last phase of Titian’s life coincided with a radical revision of his own style and painting technique. Starting from the late 1550s, Titian developed a much freer use of the brush and a less descriptive representation of reality.

In the late 1560s and early 1570s, when Titian was already extremely old, he pushed his art to the edge of abstraction. This later style has been defined as ‘magic impressionism’. All of this is well represented by two of his latest works, The Death of Actaeon at the National Gallery, and the ‘Pietà’, now in the Gallerie dell’Accademia in Venice.

The ‘Pietà’ was originally destined for his own tomb in the church of Santa Maria Gloriosa dei Frari, where Titian was buried after dying of the plague on 27 August 1576.