Johannes Vermeer, A Young Woman standing at a Virginal

There has been much speculation that this picture and another by Vermeer, A Young Woman Seated at a Virginal (also in the National Gallery), might have been made as a pair. There are many similarities between the two, but also an apparent contrast. One may represent fidelity, the other a venal, mercenary approach to love.

A young woman standing at a keyboard holds our eye with a direct gaze. Suffused in the light which streams through the window, she seems caught in a moment of expectation and uncertainty. Perhaps we have interrupted her playing, or perhaps she is waiting for us so that she can start. But then maybe the empty chair in the foreground is significant: perhaps she is waiting for someone else. The large painting of a naked Cupid, the god of erotic love, on the wall behind her may help us to understand the situation. It seems to be a signal that this is not just a scene of music making, but that the woman is waiting for her lover.

Vermeer made very few paintings and only about 36 survive today. Nearly all of these depict young women in calm, orderly domestic interiors, and often they are playing musical instruments, either alone or with one or more others. Such scenes were a popular genre in seventeenth-century Holland. Sometimes the theme was obviously bawdy, with tobacco and alcohol, then thought of as aphrodisiacs, featuring prominently. Sometimes they are apparently entirely innocent. More frequently, as here, the implications are left uncertain.

In most of Vermeer’s paintings, he seems to invite us to question the virtue or diligence of the women concerned, but then rarely gives us enough clues to help us come to a firm conclusion. This unresolved tension was probably part of the appeal of his pictures to his clients – perhaps because they reflected the undercurrents of real life. Musical gatherings were popular, respectable social activities. But they were also a good way for young people to meet, so there was always potential for flirtation, or for philandering.

If we can’t be certain about what is on the woman’s mind, the painting does tell us a good deal about her social status. She is dressed in fine silks and a pearl-studded necklace, and she is clearly in the living room of a prosperous Dutch home – it has pictures on the wall, a marble-tiled floor and a skirting of local Delft tiles. The instrument she is playing is a muselar (a type of virginal or harpsichord) and it’s an expensive one: the landscape painted on the lid is a luxurious addition that could easily double the cost of such instruments. Though not depicted in precise detail, both this painting and the small landscape on the wall resemble works by Vermeer’s Delft-based contemporary Pieter Groenewegen.

The picture of Cupid seems to be in the style of Cesar van Everdingen who worked in Haarlem and Alkmaar (north of Amsterdam). A similar version of it appears in the background of two other paintings by Vermeer (Woman Reading a Letter at an Open Window in the Gemäldegalerie, Dresden; Girl Interrupted at her Music in the Frick Collection, New York) and it may be the painting recorded in the possession of Vermeer’s widow in 1676, hanging in the room next to his studio. The image is derived from an emblem book of 1608 by Otto van Veen, which showed a series of pictures of Cupid enacting different mottoes about love. They were based on quotations from poetry and philosophy. The motto for the Cupid holding up a tablet or card like this one was ‘a lover ought to love only one’. Whether this might signal a warning or a commendation is impossible to know.

Another painting by Vermeer, A Young Woman Seated at a Virginal, may throw further light onto the significance of this motto. There has been much speculation that the two paintings might be a pair. They are almost exactly the same size, and both appear to have been made at about the same time, dating on grounds of style to 1670–1672, which was at the very end of Vermeer’s career. They each show a lone young woman – one seated, one standing – playing a keyboard, looking directly out at the viewer. What is more, one woman faces to the left and the other to the right, so they would hang together well as pendants. The shared colour scheme – the same predominately blue and yellow palate with unusually extensive use of the extremely expensive blue pigment, ultramarine – also suggests they might belong together.

As a pendant pair it is tempting to believe that they also represent a contrasting narrative. A Young Woman Standing would represent a virtuous, faithful lover, a sentiment reflected in the composition and lighting. The picture is flooded with sunshine and the perspective is direct and open, with clear, balanced vertical and horizontal lines. By contrast, A Young Woman Seated could be understood to represent venal or mercenary love. She is shown at night behind a drawn-back curtain, a picture of a brothel-keeper on the wall behind. She is also depicted from a much more oblique angle, tucked into a shadowy corner. Such interpretations are highly speculative and we can’t be sure that this contrast was intended. Opponents to the theory point out that the two paintings seem to have had quite different histories before the nineteenth century. However, this does not rule out the possibility that Vermeer designed them as a pair but ended up selling them separately, or that a very early owner sold them separately as individual works.

Whatever the truth of the matter, it isn’t only his ability to conjure up intriguing narrative uncertainties that makes Vermeer’s pictures stand out among all the painters of the Dutch Golden Age. He was also brilliant at capturing the subtle effects of light – how it reflects off different objects and surfaces and how it creates shadows of subtly different intensities. In this picture, we can sense the textures, the nap and the sheen of the woman’s silk and satin dress. At floor level the light on the grey-veined marble and white-and-blue Delft tiles seems somehow colder, while the gilt picture frame glows in the sunshine.

A Young Woman standing at a Virginal
Johannes Vermeer 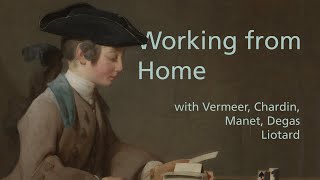 A Young Woman seated at a Virginal
Johannes Vermeer
It appears to be dark outside this elegant room: a blue curtain covers the top part of the window, but the glass below it is black. The light which glints in the heavily dilated pupils of the woman seated at the keyboard comes from in front of the painting, an unusual effect for Vermeer.Significa...
Room 27