On the third day after the Crucifixion two of Jesus’s disciples were walking to Emmaus when they met the resurrected Christ. They failed to recognise him, but that evening at supper he ‘... took bread, and blessed it, and brake and gave to them. And their eyes were opened, and they knew him; and he vanished out of their sight’ (Luke 24: 30–31).

Painted at the height of Caravaggio’s fame, this is among his most impressive domestic religious pictures. He brilliantly captures the dramatic climax of the story, the moment when the disciples suddenly see what has been in front of them all along. Their actions convey their astonishment: one is about to leap out of his chair while the other throws out his arms in a gesture of disbelief. The stark lighting underlines the dramatic intensity of the scene.

Typically for Caravaggio, he has shown the disciples as ordinary working men, with bearded, lined faces and ragged clothes, in contrast to the youthful beardless Christ, who seems to have come from a different world.

On the third day after the Crucifixion two of Jesus’s disciples were walking from Jerusalem to Emmaus. On the road they met the resurrected Christ, but failed to recognise him. He questioned them about what had happened, and explained that Christ had to suffer in order to enter into his kingdom. That evening he joined them for supper and ‘... took bread, and blessed it, and brake and gave to them. And their eyes were opened, and they knew him; and he vanished out of their sight’ (Luke 24: 30–31).

Painted at the height of Caravaggio’s fame, this is among his most impressive domestic religious pictures and perhaps his most famous. It was commissioned from Caravaggio in 1601, following the sensation caused by the public unveiling of his first major religious works – the paintings of Saint Matthew in the Contarelli Chapel in the Roman church of San Luigi dei Francesi. The painting was made for Ciriaco Mattei (1542–1614) who, along with his brother Asdrubale (1554–1638), was an enthusiastic patron and protector of Caravaggio, commissioning three works from him in just two years (1601–2): our picture, The Taking of Christ  (on indefinite loan to the National Gallery of Ireland, Dublin), and Saint John the Baptist  (Pinacoteca Capitolina, Rome). The Supper at Emmaus soon left the Mattei collection and entered the possession of Cardinal Scipione Borghese, remaining in the Borghese collection in Rome until the early nineteenth century. It is one of three paintings by the artist in the National Gallery – the others being Boy bitten by a Lizard and Salome receives the Head of John the Baptist – and was the first to enter our collection in 1839.

Caravaggio captures the dramatic climax of the story, the moment of revelation when the disciples suddenly see what has been in front of them all along. Their actions convey their astonishment: one is about to leap out of his chair, his elbow jutting out towards us, while the other throws out his arms in a gesture of disbelief. Typically for Caravaggio, he has shown the disciples as ordinary working men, with bearded, lined faces and ragged clothes, in contrast to the youthful beardless Christ who, with his flowing locks and rich red tunic, seems quite literally to have come from a different world.

Although the picture seems to capture a fleeting moment it is nevertheless carefully staged. The artist uses contrasts of light and shade (known as chiaroscuro) to heighten the drama. A strong light from the left falls on the faces of Christ and the disciple on the right, who is often identified as Saint Peter. It casts a shadow on the blank wall behind Christ, almost like a reverse halo, and illuminates the hand which the disciple thrusts towards the viewer, in a pose evoking Christ on the Cross during his crucifixion.

The geometric structure which underlies the composition helps guide our eye around the picture. The back view of the disciple on the left, thought to be Cleophas (the only apostle named in the Gospel), and the other disciple’s outstretched arms, shown in extreme foreshortening, act like tram lines focusing our attention on Christ’s serene face. He and the disciples form an inward-facing triangle, united in the moment of miraculous revelation. Unmoved, and standing outside it, is the innkeeper: his thumbs are tucked into his belt and he looks on impassively with his face in shadow, implying that he has not yet ’seen the light' – a metaphor for spiritual understanding.

The same light illuminates the astonishingly detailed and realistic still life laid out on the crisp white tablecloth – loaves of rustic bread, a chicken, and a basket of fruit teetering dangerously on the edge of the table – and is both reflected in and refracted through the carafe of water and wine glass. The tangibility of these objects draws us into the scene, and because the food and drink seem so real to us, so does the miracle.

As well as attracting the attention of wealthy and influential patrons, Caravaggio made a deep impression on contemporary artists, both for his evocative use of chiaroscuro and for his practice of painting from life. One of his most controversial techniques was painting directly onto the canvas, rather than following the traditional method of working out a composition through numerous preparatory studies. Indeed, not a single drawing that can be firmly attributed to Caravaggio survives. Caravaggio’s paintings were carefully composed, however, and technical examination has revealed that he sometimes drew outlines with a brush (known as abbozzo). Here, there are traces of brushed drawing in dark brown paint, slightly above the finalised contour of the base of the wine glass on the table, suggesting that Caravaggio used underdrawing to lay out the design of the elaborate still-life arrangement.

For the figures, however, Caravaggio only needed a rough guide to place forms. Where the sash of the disciple on the right joins the tablecloth, there are two rapidly executed, highly impastoed diagonal brushstrokes, a kind of summary indication he often used. In many of his works he also incised freehand lines into the still malleable priming (or undercoat) to mark out where figures were to be placed, and presumably to allow models to resume their poses. Although no incisions are visible here, they might well have been faint to begin with or simply obscured by layers of paint – after all, this is one of the artist’s most highly finished works. The lack of significant pentimenti also suggests a high degree of preparation and planning: the only significant change is the repositioning of the same apostle’s left knee behind the carpet, rather than in front of it, clearly done to enhance the thrust of his outstretched arm and the projection of the basket of fruit.

The fact that Caravaggio planned his paintings so carefully does not take away from their startling immediacy and accessibility. Many of his more unusual practices, such as basing his figures on real models taken from the world around him, were aimed at bringing a more convincing realism to history painting, and it was his technical innovations and dramatic capabilities that brought his stories so vividly to life.

The Supper at Emmaus 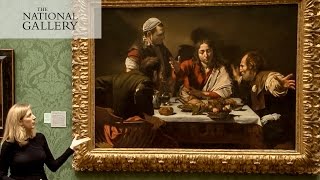 Curator of Later Italian, Spanish, and French 17th-century Paintings, Letizia Treves, guides you through the tumultuous life of Caravaggio. She looks at how his innovative style developed from a focus on nature and expression in his early works to th...

Boy bitten by a Lizard
Michelangelo Merisi da Caravaggio
An effeminate youth recoils in pain as he is bitten by a lizard, which clings tenaciously to his finger. In the foreground is a magnificent still life of fruit, with a rose and sprig of jasmine in a glass vase. Look closely and you can see the reflection of a room in the curved surface of the vas...
Room 32
Salome receives the Head of John the Baptist
Michelangelo Merisi da Caravaggio
The story of the death of John the Baptist is related in the Gospel of Mark (6: 16–29). John had criticised King Herod for marrying his brother’s wife, Herodias, and she sought revenge. At Herod’s birthday feast, Herodias’s daughter Salome so delighted the King by her dancing that he promised her...
Room 32