Turner is perhaps the best-loved English Romantic artist. He became known as 'the painter of light', because of his increasing interest in brilliant colours as the main constituent in his landscapes and seascapes. His works include water colours, oils and engravings.

Turner was born near Covent Garden in London and entered the Royal Academy Schools in 1789. His earliest works form part of the 18th-century topographical tradition. He was soon inspired by 17th-century Dutch artists such as Willem van der Velde, and by the Italianate landscapes of Claude and Richard Wilson.

He exhibited watercolours at the Royal Academy from 1790, and oils from 1796. In 1840 he met the critic John Ruskin, who became the great champion of his work.

Turner became interested in contemporary technology, as can be seen from 'The Fighting Temeraire' and 'Rain, Steam and Speed'. At the time his free, expressive treatment of these subjects was criticised, but it is now widely appreciated.

Turner bequeathed much of his work to the nation. The great majority of the paintings are now at Tate Britain. 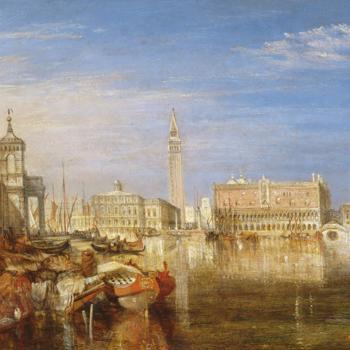 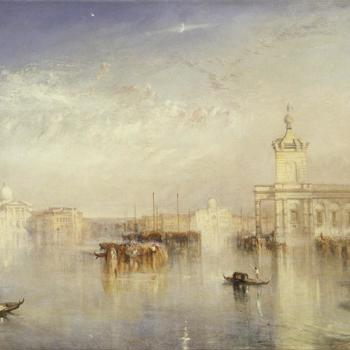 The Evening Star
Joseph Mallord William Turner
In contrast to many of Turner’s paintings – often full of activity, grand architectural settings, dramatic weather and dazzling effects of colour and light – this painting looks almost empty. The only figure is a barely visible young boy with a shrimping net over his shoulder, who wades in from t...
Not on display
The Fighting Temeraire
Joseph Mallord William Turner
Turner’s painting shows the final journey of the Temeraire, as the ship is towed from Sheerness in Kent along the river Thames to Rotherhithe in south-east London, where it was to be scrapped. The veteran warship had played a distinguished role in the Battle of Trafalgar in 1805, but by 1838 was...
Not on display
The Parting of Hero and Leander
Joseph Mallord William Turner
This picture illustrates an ancient Greek myth that was retold by later writers, including the English romantic poet, Lord Byron. Hero, a priestess of Aphrodite, lived in a tower on the Hellespont strait, which separates Europe from Asia. She was in love with Leander, a young man from the Asian s...
Not on display
Ulysses deriding Polyphemus - Homer's Odyssey
Joseph Mallord William Turner
The subject of this painting is taken from Book IX of Homer’s Odyssey. It shows Ulysses sailing from the island where Polyphemus, a one-eyed giant, had held him and his men captive. Wearing a helmet and a scarlet cloak, Ulysses raises his arms in victory as he stands on the deck of his ship, belo...
Not on display
You've viewed 6 of 12 paintings