Before moving to the British Museum, Neil MacGregor was Director at the National Gallery (1987 – 2002).

Neil MacGregor was born in Scotland in 1946. After studying French and German at New College, Oxford, and philosophy at the Ecole Normale Supérieure in Paris, MacGregor took an LLB in Law at the University of Edinburgh and was called to the Scottish bar.

During his time at the National Gallery, MacGregor raised the profile of the organisation by hosting the popular BBC television series 'Making Masterpieces' and 'Seeing Salvation'. He also oversaw the opening of the Sainsbury Wing, the refurbishment of the galleries and a complete re-hang of the collection.

The Virgin and Child with Two Angels
Cimabue
This is one of only two small-scale works by Cimabue, rediscovered in 2000. Soon after this, a link was made between it and a panel in the Frick Collection, New York, which depicts the Flagellation. They were both probably part of a much larger panel painted with small images showing the events l...
Room 51
'The Archers'
Sir Henry Raeburn
‘The Archers’ is one of a small number of outstanding portraits from the early part of Raeburn’s career and was probably painted in about 1789 or 1790, when the subjects were in their late teens. Robert and Ronald Ferguson became members of the Royal Company of Archers in 1792 and 1801 respective...
Room 34
The Four Elements: Earth
Joachim Beuckelaer
An avalanche of outsize vegetables tumbles towards us on the left of this painting. On the right, glistening fruits are piled in baskets and bowls balanced rather precariously on a wheelbarrow.The two women at the front, often called stallholders, appear to be buying rather than selling. Their ro...
Room 15
The Channel of Gravelines, Grand Fort-Philippe
Georges Seurat
This is one of four paintings Seurat produced in 1890 near the town of Gravelines, a small port on the northern French coast between Calais and Dunkirk. Positioned on the sand dunes of Petit-Fort-Philippe, we see the shore in the morning light after the receding tide has left a broad expanse of o...
Room 43
The Four Elements: Water
Joachim Beuckelaer
A plethora of piscine produce is presented to us: fish of all kinds are piled in baskets, tumble over the edges of platters or slip from the stallholder’s grasp – there are even mussel shells scattered on the floor. The two vendors ignore their prospective clients and look directly at us, as if a...
Room 15
Portrait of the Artist with his Wife and Daughter
Thomas Gainsborough
This is the earliest known self portrait in oil by Gainsborough, and the only known one of him with his family. He sits with his wife, Margaret, and the little rosy-cheeked girl is probably Mary, their short-lived first daughter. It is likely Gainsborough began it before Mary’s burial on 1 March...
Room 35
The Four Elements: Air
Joachim Beuckelaer
At first sight this looks like a busy sixteenth-century street scene. A man sells poultry and other produce, piled up in baskets and barrels, in the corner of a market square. He lifts up two hens by their legs, feathers from their flapping wings drifting down and settling on the coop below. On t...
Room 15
The Four Elements: Fire
Joachim Beuckelaer
This large and well-stocked kitchen is a hive of industry. Four female servants prepare and cook food while a young man perches on a stool before the fire, swigging from an earthenware jug. Pots and pans litter the brick floor and every available surface seems stacked with produce.This is one of...
Room 15
Lake Keitele
Akseli Gallen-Kallela
This painting shows Lake Keitele in central Finland. The zigzag pattern on the water’s surface is a natural occurrence caused by the interaction of the wind with the lake’s currents, but it is also intended to evoke the wake created by Väinämöinen, the poet-hero of the Finnish saga Kalevala, as h...
On display elsewhere
Coastal Scene
Théo van Rysselberghe
This cool, elegant painting explores the quality of light on water – how it moves, how it reflects and, towards the base of the picture, how it glows. The clouds are hardly reflected in the water: it seems as if the light has slipped under them to illuminate the vast, still stretch of almost tide...
Room 43
Portrait of the Abbé Scaglia
Anthony van Dyck
The Abbé Scaglia (1592–1641), whose full name was Cesare Alessandro Scaglia di Verrua, was a cleric and diplomat well known in Rome, Madrid, London and Paris for his service to the House of Savoy and Philip IV of Spain. Scaglia was also an art collector of renown who knew, among others, Rubens, V...
Room 21
The Story of David and Goliath
Francesco Pesellino
This long and fantastically detailed painting is a precious survivor of Renaissance interior decoration – and it gives us an idea of just how spectacular this could be. It is one of a pair telling the story of David, King of Israel, who started life as a shepherd boy but rose to fame and fortune...
Not on display
The Triumph of David
Francesco Pesellino
A fantastic procession winds its way through a Tuscan landscape dotted with hills and walled towns. Extravagantly dressed nobles ride prancing horses, while their hounds, a hunting cheetah and even a bear trot along beside them.Although it looks like medieval Italy, this actually shows a biblical...
Not on display
The Virgin and Child
Master of the Clarisse (possibly Rinaldo da Siena)
This small painting is one of the earliest in the National Gallery’s collection. It was probably made in Siena – it shares many features with Sienese painting of the period – but its combination of images is rare. It is possible that it’s based on a Byzantine (Eastern Christian) painting.The Virg...
Room 51
Whistlejacket
George Stubbs
One of the most important British paintings of the eighteenth century, Whistlejacket is probably the most well-known portrait of a horse. It is also widely acknowledged to be George Stubb’s masterpiece. The Arabian chestnut stallion had won a famous victory at York in 1759, but by 1762 had been r...
Room 34 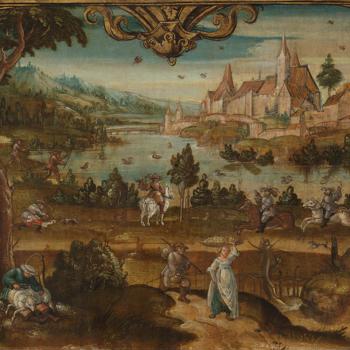 Summer
Hans Wertinger
In the fields beside a broad winding river labourers scythe grass to make hay, while a shepherd takes advantage of the shade of a large tree to shear a sheep. A woman with a large tray of fruit on her head is perhaps on her way to the town opposite to sell her produce at market. Meanwhile, aristo...
Room 17
Saint Jerome
Albrecht Dürer
This small double-sided painting was most probably made for private worship. The front shows Saint Jerome kneeling in front of a crucifix wedged into the stump of a tree. He beats his chest with a rock in empathy with Christ’s Passion (his torture and death at the Crucifixion). The lion resting b...
Room 65
A Cup of Water and a Rose
Francisco de Zurbarán
In this small and intimate painting, everyday objects appear monumental and take on a mystical intensity. On a tabletop or ledge, a ceramic cup of water with delicately curved handles sits in the centre of a silver plate. A thornless rose in full bloom balances on the plate’s edge.That these obje...
Room 30 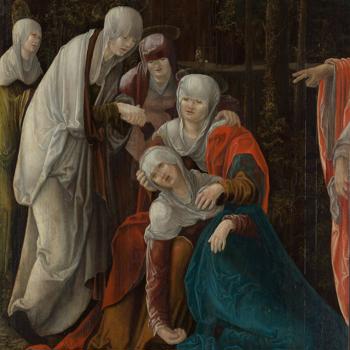