Van Dyck was the most important Flemish painter of the 17th century after Rubens, whose works influenced the young Van Dyck. He also studied and was profoundly influenced by the work of Italian artists, above all, Titian.

Van Dyck was an extremely successful portraitist and painter of religious and mythological pictures in Antwerp and Italy. He was also an accomplished draughtsman and etcher. However, he is now best remembered for his elegant representations of Charles I and his court.

Van Dyck was born in Antwerp. A precocious artist, his first independent works date from 1615-16, when he would have been about 17. In 1621 he was in the service of James I of England, but left to visit Italy, where he remained until 1627. His aristocratic rendering of Genoese patricians, like the so-called 'Balbi Children', were very well received in that city. After a second period in the Netherlands, greater success awaited Van Dyck when he settled at the English court in 1632. His authoritative and flattering representations of Charles I and his family set a new standard for English portraiture to which members of the court were keen to aspire.

(Showing 6 of 24 works)
Charity
Anthony van Dyck
In his first letter to the Corinthians, Saint Paul outlines the importance of faith, hope and charity, naming charity as the greatest of the three. At the time this picture was painted, charity meant combining the love of god with love of one’s neighbour.From the sixteenth century onward, charity...
Room 21
Equestrian Portrait of Charles I
Anthony van Dyck
A man sits on a muscular horse, towering above a servant who passes him a helmet to complete his suit of armour. A Latin inscription on the tablet hanging from a tree identifies him as ‘King of Great Britain’ – this is Charles I, surveying his kingdom. Anthony van Dyck painted several portraits o...
Room 21
Lady Elizabeth Thimbelby and her Sister
Anthony van Dyck
Anthony van Dyck was largely responsible for introducing the double or ‘friendship’ portrait to Britain. The informal composition of this painting as well as the quantities of shimmering silk on display perfectly illustrate the appeal of Van Dyck’s new style to aristocratic British patrons eager...
Room 21
Lord John Stuart and his Brother, Lord Bernard Stuart
Anthony van Dyck
This life-size double portrait shows the youngest sons of the 3rd Duke of Lennox: Lord John Stuart, on the left, with his brother Lord Bernard Stuart. They were only about 17 and 18 but they ooze aristocratic superiority and are dressed in extravagant fashion.Van Dyck’s ability to evoke the textu...
Not on display 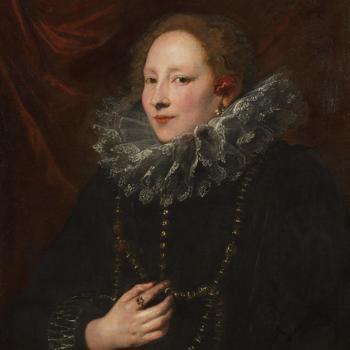 Portrait of a Woman
Anthony van Dyck
The dark red curtain in the background gives a warm, luxurious atmosphere to this portrait and complements the sitter’s auburn hair and sparkling brown eyes. Her half smile and the rose tucked over her ear suggest an agreeable, perhaps even mischievous, character. Unfortunately, the identity of t...
Room 21
Portrait of a Woman and Child
Anthony van Dyck
The glorious colours in this portrait are equalled by the delicacy and sensitivity with which Van Dyck has captured an intimate moment between us and an unknown woman and her little boy. She wears the formal clothing of an affluent bourgeois wife: a black silk dress with an elaborate gold stomach...
Room 21
Portrait of Cornelis van der Geest
Anthony van Dyck
Cornelis van der Geest was one of the most prominent art collectors of his day, so this commission must have been extremely important to Anthony van Dyck, who was only 21 at the time.He has taken a relatively conservative approach, using a traditional format: a close up of just the sitter’s face,...
Room 21
Portrait of François Langlois
Anthony van Dyck
In this lively, informal portrait, Anthony van Dyck presents to us someone he had known for several years and whose company he clearly enjoyed. François Langlois was an engraver, art dealer and publisher who lived in Italy in the 1620s, which is where he must have met Van Dyck. Langlois was also...
On display elsewhere
Portrait of George Gage with Two Attendants
Anthony van Dyck
The central figure in this work is George Gage, a notable art dealer and political agent in the 1620s, acting for King James I and then Charles I. Both he and Van Dyck were in Rome in 1622 and 1623, and it is highly likely that the painting was made then.Van Dyck has depicted Gage as an elegant f...
Not on display 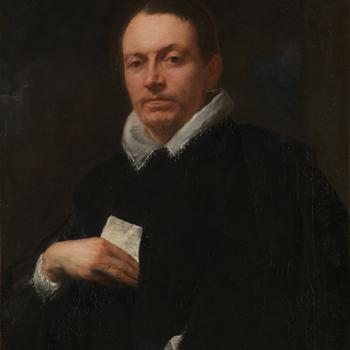 Portrait of Giovanni Battista Cattaneo
Anthony van Dyck
Anthony van Dyck spent much of his twenties in Italy and in particular Genoa, where a wealthy merchant aristocracy were eager patrons for his flattering and engaging style of portraiture. Many of these were painted full-length, images of graceful figures, clearly aware of their status. This is a...
Room 21
Portrait of the Abbé Scaglia
Anthony van Dyck
The Abbé Scaglia (1592–1641), whose full name was Cesare Alessandro Scaglia di Verrua, was a cleric and diplomat well known in Rome, Madrid, London and Paris for his service to the House of Savoy and Philip IV of Spain. Scaglia was also an art collector of renown who knew, among others, Rubens, V...
Room 21
Rinaldo and Armida
Anthony van Dyck
The enchantress Armida and her bewitched lover, Rinaldo, a Christian knight, recline in a beautiful landscape, surrounded by attendant cupids. The scene shows a tender moment between the couple before Rinaldo’s comrades, whose helmets are visible behind the bush on the left, disturb their idyll a...
Not on display
St Ambrose barring Theodosius from Milan Cathedral
Anthony van Dyck
In this painting, Saint Ambrose (about 340–398), Bishop of Milan, stops the Emperor Theodosius (about 346–395) and his retinue from entering the city’s cathedral. This was a punishment for Theodosius‘ massacre of the people of Thessalonica, who had murdered his general, Butheric.This story was re...
Room 21
The Abbé Scaglia adoring the Virgin and Child
Anthony van Dyck
Abbé Scaglia (1592–1641), cleric, diplomat, spy and one of Van Dyck’s most important patrons, commissioned this painting while suffering from ill health and in a reflective state of mind. It was meant for the church of the Recollect order of Augustinians in Antwerp; within a few years Scaglia wou...
Room 21
The Balbi Children
Anthony van Dyck
Three dashing young boys stand on the steps of an impressive building. They are known as the Balbi children because the painting was once in the collection of the wealthy ​Balbi family ​in Genoa, but we don‘t know who they are. Some have suggested they were members of the Franchi family because t...
Central Hall
William Feilding, 1st Earl of Denbigh
Anthony van Dyck
William Feilding, 1st Earl of Denbigh steps forward, gun in hand. He is shown life-size. We look up at him from below, which emphasises his commanding pose, but the elegance and urbanity usually present in Anthony van Dyck’s formal portraits seems to be missing. This is partly because of the Earl...
Room 21
Drunken Silenus supported by Satyrs
Possibly by Anthony van Dyck
This uproarious crowd of mythical characters is noisy and ill-behaved, but meant to make you smile. The old man who has lost his clothes in the revels is Silenus – in Roman myth, the teacher and mentor of Bacchus, the god of wine. In the seventeenth century, the Roman myths were popular as subjec...
Room 18
Prince Charles Louis, Count Palatine
Studio of Anthony van Dyck
Prince Charles Louis, Count Palatine, was the second son of Frederick V, Elector Palatine and briefly King of Bohemia. His elder brother Henry had died young, and although Charles Louis was now heir to the Palatinate, his father had been deposed and the family were living in exile in the Netherla...
Not on display
Prince Rupert, Count Palatine
Studio of Anthony van Dyck
Elegant and full of self-confidence, the young Prince Rupert stands every inch a member of the royal Stuart dynasty. Known as Rupert of the Rhine, he bears a striking resemblance to his cousin the Prince of Wales, later Charles II. The portrait is designed to place us at his feet, and yet he look...
Gallery C
Portrait of a Woman
Style of Anthony van Dyck
The identity of this brown-eyed woman who sits for what may be an engagement or marriage portrait remains a mystery. She is probably aristocratic and is clearly wealthy – the many pearls strung around her neck and over her shoulders, and the two large tear-drop pearls of her earrings, are showily...
Not on display
Portraits of Two Young Englishmen
Style of Anthony van Dyck
Two young men in fashionable clothing look into the distance as they lean against a plinth. This double portrait has traditionally been considered to be by Anthony van Dyck, but this is now doubted. Though it reflects the style of the artist in the 1630s, it could have been painted by a follower...
Not on display
The Horses of Achilles
Style of Anthony van Dyck
Two horses run wild across a flat, earthy plain against a cloudy sunset. These are Xanthus and Balius, the immortal horses of the Greek hero Achilles. They were the offspring of Zephyrus, the god of the west wind, who may be personified by the winged head which is about to expel a mouthful of air...
Not on display
Portrait of Robert Rich, 2nd Earl of Warwick
After Anthony van Dyck
This is a small, grisaille (painted in shades of black, white and grey) copy done by an unknown artist after a portrait by the Flemish painter Anthony van Dyck. It shows Robert Rich, 2nd Earl of Warwick (1587–1658), a courtier of King Charles I who opposed many of the King’s political and religio...
Not on display
Portrait of the Artist
After Anthony van Dyck
A young man looks out at the viewer with a piercing gaze and provocative expression. With an elegant hand gesture he points towards his chest, alluding to the fact this image is in fact a self portrait. His lips are parted, as if he is about to introduce himself – this is the Flemish painter Anth...
Not on display
You've viewed 6 of 24 paintings