One of the most important British paintings of the eighteenth century, Whistlejacket is probably the most well-known portrait of a horse. It is also widely acknowledged to be George Stubb’s masterpiece. The Arabian chestnut stallion had won a famous victory at York in 1759, but by 1762 had been retired from racing. He belonged to the 2nd Marquess of Rockingham, who commissioned Stubbs to paint a commemorative life-size portrait of his prize horse on a scale that was more appropriate for a group portrait or historical painting.

Stubbs excludes any reference to a rider, riding equipment or location, painting the magnificent rearing horse against a neutral background of pale gold. Despite suggestions that a rider was originally planned, Whistlejacket was always meant to be unmounted. Free from human control, the riderless horse is the embodiment of unrestrained natural energy, a free spirit that prefigures Romanticism’s celebration of nature.

George Stubbs was probably commissioned to paint this life-size portrait of the racehorse Whistlejacket in 1762. The commission came from Charles Watson-Wentworth, 2nd Marquess of Rockingham, who was eventually to commission 12 paintings from him. The Marquess of Rockingham was one of the richest men in England – and briefly Prime Minister – and had built up a substantial collection of classical sculpture, much of which he acquired while on the Grand Tour in Italy from 1748 to 1750. His principal residence, Wentworth House (now known as Wentworth Woodhouse) in Yorkshire, was well suited for the display of statues – and of large paintings such as this. Aside from collecting sculpture, Rockingham’s other great passions were breeding racehorses and gambling.

In 1762 Stubbs spent several months at Wentworth House and completed five paintings that were paid for in August. These included Mares and Foals without a Background and Whistlejacket and two other Stallions in the Wentworth Stud with Joshua Cobb, The Head Groom (both in a private collection), which are notable for their classical frieze-like structure and lack of a background. Stubbs’s painting of Whistlejacket in this second picture most likely prompted Rockingham to commission a monumental single portrait of the horse.

Whistlejacket’s career as a racehorse was only moderately successful. It was only after his first owner, Sir William Middleton, had sold him to Lord Rockingham that the ten-year-old stallion achieved his greatest success, and national fame, when he won a race at York in August 1759. It was his final race, as he was then retired to stud. Whistlejacket’s famous victory was not, however, the principal reason for the commission. As a breeder of horses, Rockingham recognised that Whistlejacket was a prime specimen of pure-bred Arabian stock with the finest characteristics of the breed. Whistlejacket’s coat was a rich coppery chestnut and he had an auburn tail and mane that lightened to white — reputedly the colouring of the original wild horses of Arabia. His head was small and tapered with a broad forehead, delicately modelled ears and large wide nostrils. He had a concave profile – like a gazelle’s – with the head joining the neck in a swelling arched curve. Stubbs’s task was not simply to paint a horse, but to paint a portrait of this particular animal.

Stubbs’s understanding of horse anatomy was unsurpassed among British artists of the time. Between 1756 and 1758, he had spent 18 months in the Lincolnshire village of Horkstow dissecting and studying horses. Working in a barn specifically equipped to hang horse carcasses from the ceiling, he made detailed drawings of every stage of the many dissections he completed. These studies formed the basis of a series of engraved plates, which he published in 1766 as The Anatomy of the Horse. Yet despite his almost scientific understanding of horse anatomy, Stubbs takes liberties with Whistlejacket’s pose, showing more of his body than would be possible in a natural pose in order to enhance the portrait’s dramatic effect. For example, both the rump and the forehead are simultaneously visible, as are the right knee and the underside of the hoof. Compared to the earlier Whistlejacket and two other Stallions in the Wentworth Stud, Whistlejacket also appears wilder and more monumental. His ears are cocked, his nostrils flared and the whites of his eyes are visible. Both his mane and tail are fuller, and his untrimmed mane is arranged in a natural plait. In contrast to the sheen of Whistlejacket’s smooth coat, Stubbs uses visible brushwork to enhance the texture and movement of the undocked tail.

With his forelegs drawn in, Whistlejacket’s rearing body twists slightly to the right as he turns his head towards us. He is rearing in a levade position, often used in dressage, when a horse bends its hind legs equally to carry the full weight of its body for two or three seconds. Usually associated with a mounted ruler or military commander, the levade pose was typically a sign of majesty or superior rank. The pose had previously been used in large heroic equestrian portraits by artists such as Rubens and Velázquez. But although the rearing horses in such portraits are impressive, they remain subject to the rider. Whistlejacket is of an entirely different character, as the painting’s most striking feature – aside from its scale (it is almost three by two-and-a-half metres) – is the absence of a rider. In other equestrian paintings, Stubbs often alluded to the sporting achievements of his subjects by situating them in a racecourse and by including jockeys and stable boys. But here he eliminates any references to racing, focusing instead on Whistlejacket’s qualities as a prize physical specimen.

As Rockingham already owned paintings by Stubbs of people and horses set against a neutral background, it likely this format appealed to him. Because of his interest in sculpture, he may also have been comfortable with a painting of a free-standing horse without either rider or location. Given the unnaturalness of Whistlejacket’s stance, Stubbs possibly borrowed the pose from sculpture, as he could not have observed or studied it from life. This may explain the unusual length of Whistlejacket’s free-flowing tail, which in sculptures of rearing horses is often extended to the ground to provide support.

Despite speculation that a rider was originally to be included, there is no evidence to support this. Whistlejacket’s back is not long enough to fit a saddle, and there is no evidence of drawing on the canvas to indicate a mounted rider. Nor is there any basis for claims by contemporary observers that the rider was to be George III (who became king in 1760), but that Rockingham changed his mind following a change of political fortune. Such comments may have arisen because viewers were simply unused to the idea of a portrait of a horse on its own.

Lacking either a background or distracting incidental detail, Whistlejacket is both a monument based upon classical sculpture and an image of a living animal. A portrait grounded in a precise understanding of anatomy, it is also an expressive celebration of an animal free from restraint, whose wild spirit prefigures Romanticism’s celebration of nature. 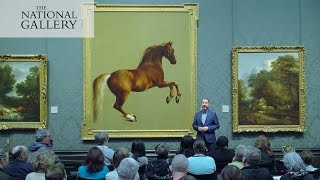 National Gallery Adult Learning Programmer Matthew Morgan gives an in-depth talk on George Stubbs's magnificent painting of the race horse Whistlejacket. Enjoy an insight into Stubbs's painting technique, and how he came to paint 'Whistlejacket' for ...

A Gentleman driving a Lady in a Phaeton
George Stubbs
A gentleman and a lady sit in an open carriage. Their identities are unknown, and it is unclear if they are married. This type of high-built, four-wheel carriage was typically driven by its gentleman-driver owner, rather than by a coachman. It was known as a ‘phaeton’ after the son of the Greek g...
Not on display
The Milbanke and Melbourne Families
George Stubbs
This painting was most likely commissioned to commemorate the alliance of the Milbanke and Melbourne families through marriage in April 1769. The married woman is Elizabeth Milbanke (seated in a carriage on the left) and her husband is Peniston Lamb, 1st Lord Melbourne, mounted on a chestnut hors...
Room 34