Detail from Meindert Hobbema, 'The Avenue at Middelharnis', 1689

Landscape has always played a vital role in painting. Until the 16th century this was almost exclusively as the (often imaginary) backdrop for biblical or mythological subjects. It was in 16th-century Flanders that landscape evolved into an independent genre. Flemish immigrant artists introduced these recent developments to the fledgling Dutch Republic. It is thus that a country characterised by an ostensibly uninspiring flat landscape, much of it not even rising above sea level, produced some of the greatest landscape painters in Western art.

The Dutch flat landscapes stand in stark in contrast to the compositions of the so-called Italianate painters, painters who had travelled to Italy in the early 17th century and, after their return, continued to paint landscapes dominated by warm Mediterranean light and motifs. At mid-century, Jan Both initiated a new wave of Italianate landscape painting in Holland. His style was highly influential on a second generation of Dutch Italianate painters such as Nicholaes Berchem and others, some of whom may never have travelled to Italy themselves.

Peasants by a Ruined Aqueduct
Nicolaes Berchem
The evening sun touches the sturdy cattle standing at the foot of the ruins of a Roman archway. The soft light casts shadows on the weather-worn stones, displaying the ruin’s age and former grandeur. The hills behind may have been recorded by Berchem during a possible stay in Italy, but the cows...
Room 19
A View on the Tiber
Jan Both
Jan Both was one of a group of Dutch artists that made the long and often dangerous journey across the Alps to Italy, said at the time to be the heart of great painting. He stayed for ten years, becoming a leader in the development of Dutch Italianate landscape showing hardy peasants against soft...
Room 19
A Herdsman with Five Cows by a River
Aelbert Cuyp
This small, evocative painting shows the work of Aelbert Cuyp at the peak of his maturity as an artist. It’s a picture full of light and reflections, transforming a simple view of a river at evening time into visual harmony.Light puffy clouds lit by the evening sun drift overhead, leaving patches...
Room 19 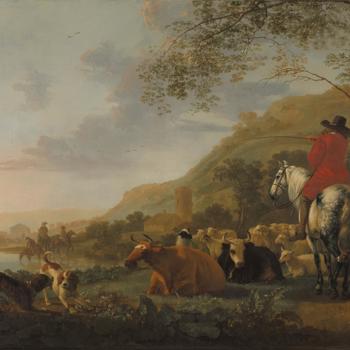 A Hilly Landscape with Figures
Aelbert Cuyp
The scarlet coat of the horseman catches our attention and we instinctively follow the direction of his whip, which he points away into the distance. And the concept of distance – just as much as the animals and figures in the foreground – is at the heart of this painting. Aelbert Cuyp has constr...
Room 19
A Landscape with Horseman, Herders and Cattle
Aelbert Cuyp
We're looking at a landscape in the Low Countries, probably the flatlands between Nijmegen and Cleves in the eastern part of the Netherlands, which Cuyp had visited in the early 1650s. But the golden light, and that implied heat, is more reminiscent of southern Europe than the north. It was a com...
Room 19
The Small Dort
Aelbert Cuyp
This painting is very similar to but roughly half the size of another landscape by Aelbert Cuyp, also in the National Gallery’s collection: A Distant View of Dordrecht, with a Milkmaid and Four Cows, and Other Figures. We don't know which was painted first but presumably one of Cuyp’s customers s...
Room 19
View of the Westerkerk, Amsterdam
Jan van der Heyden
This is one of the best seventeenth-century examples of what today we might think of as a high-resolution image. The detail and brushwork are so fine that no matter how closely you look at, or zoom in on, the picture, it never quite seems to pixelate. Yet the painter has made a very strange mista...
Room 19
A Woody Landscape with a Cottage
Meindert Hobbema
A rutted cart track leads straight into the middle of the picture. A group of figures are caught in a patch of sunlight while a cottage merges into the shadows. A frieze of trees stands out against a sunny glade and a cloudy sky beyond. Many of Hobbema’s landscapes were composed around these spec...
Room 19
The Haarlem Lock, Amsterdam
Meindert Hobbema
Hobbema was a specialist landscape painter – this is his only known city view, a depiction of the ordered and harmonious relationship between people and water. We are looking towards the Haarlem Lock at the point where two of Amsterdam’s most important waterways meet – the Singel on the right and...
Room 19
An Extensive Landscape with a Road by a River
Philips Koninck
This imaginary landscape in the flatlands of the Low Countries conjures a remarkably effective illusion of a vast panorama opening up before us. Koninck has used two particular techniques to create this effect. He’s made the figure in the middle ground the most prominent and painted the landscape...
Room 19 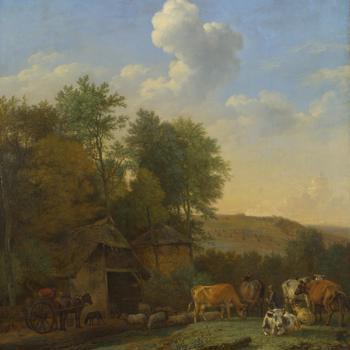 A Landscape with Cows, Sheep and Horses by a Barn
Paulus Potter
This scene of rural tranquillity is typical of the work of Paulus Potter, who was famous in his lifetime for his paintings of domestic animals. The hilly terrain and summer light are more reminiscent of Italy than Holland, but these are most definitely Dutch cows. Potter has observed them with gr...
Room 19
A Landscape with a Ruined Castle and a Church
Jacob van Ruisdael
This, one of van Ruisdael’s most famous paintings, is a bigger version of his An Extensive Landscape with Ruins, also in the National Gallery’s collection. This sizeable picture was almost certainly painted on commission and was designed to hang in a very large room. Its size is matched by the se...
Room 19
A Panoramic View of Amsterdam looking towards the IJ
Jacob van Ruisdael
Room 19
A Panoramic View of Haarlem
Jacob van Ruisdael
Room 19
A View of Deventer seen from the North-West
Salomon van Ruysdael
Three small boats head up river, towards the rising sun. Their taut, curved sails are outlined against a cool, luminous sky as they lean with the wind. Moving clouds reveal a patch of intense blue that is reflected silvery grey on the translucent water below. Cattle wade up to their knees by the...
Room 19
Dutch Vessels Inshore and Men Bathing
Willem van de Velde
High, light clouds drift across the wide sky. All seems quiet at the end of the day. A man with a fishing basket strapped to his back squelches across the wet sand left by the ebbing tide, and the sun is still warm enough for a group of men and boys to skinny-dip in the shallow water. Clothes are...
Room 19
An Italian Courtyard
Jan Weenix
Two young lovers sit on the steps of an inn under an Italian sky, wiling away their time flirting. He gazes up at her as she dips a sweetmeat into his glass of wine, a pearl earring lightly brushing her neck, a feather waving over her fair curls. A young black boy in magnificent uniform, possibly...
Room 19