According to the Old Testament Book of Exodus, Pharaoh ordered all Israelite baby boys to be cast into the river, but Moses’s mother hid him in a basket among the bulrushes. He was discovered there by Pharaoh’s daughter, Thermutis, who is shown here dressed in a yellow robe and surrounded by her maidens. Moses is cradled by his sister, Miriam, dressed in white.

Thermutis decides to spare Moses from death and eventually adopts him. The joy of this event is reflected in Thermutis’s welcoming smile and the excited gestures of her companions. Their idealised bodies and extravagant drapery reveal Poussin’s interest in ancient sculpture. The palm trees and statue of a sphinx, a mythical creature with a human head and lion’s body, tell us the scene is taking place in Egypt. Colourful clothing shimmers in the sunlight, conveying the warmth of the Egyptian climate.

According to the Old Testament Book of Exodus, Pharaoh ordered all Israelite baby boys to be cast into the river, but Moses’s mother hid him in a basket among the bulrushes. He was discovered there by Pharaoh’s daughter, Thermutis, who is shown here dressed in a yellow robe and surrounded by her maidens. Moses is cradled by his sister, Miriam, dressed in white.

Thermutis decides to spare Moses from death and eventually adopts him. The joy of this event is reflected in Thermutis’s welcoming smile and the excited gestures of her companions, whose fluttering clothing shows their hurried movement towards the infant. To the right, a woman catches our eye as she steps out of the water. The palm trees and statue of a sphinx, a mythical creature with a human head and lion’s body, tell us the scene is taking place in Egypt. Colourful clothing shimmers in the sunlight, conveying the warmth of the Egyptian climate.

Poussin takes inspiration from ancient Roman architecture and from recently discovered mosaics in Rome. The unusual-looking building in the centre with a large vase on the roof to collect water is based on a mosaic discovered in around 1600 in the Temple of Fortuna at Praeneste. Poussin was familiar with this building through watercolour studies of it owned by his patron, Cassiano dal Pozzo. The figures, with their idealised bodies and extravagant drapery, are also based on sculptures from classical antiquity.

Poussin painted three, or possibly four, versions of this subject. Two of these paintings were in the collection of Louis XIV and are now in the Louvre, Paris. Painted in 1651 for Benardin Reynon (1613–1686), a Lyon silk merchant, this is the last and most accomplished version. It had many prestigious owners: the Duc de Richelieu (1629–1715), the great-nephew of Cardinal Richelieu, and later in the seventeenth century, Jean-Baptiste Colbert, Marquis de Seignelay (1651–1690), whose widow is portrayed in Mignard’s The Marquise de Seignelay and Two of her Sons, also owned by the National Gallery.

This subject was often painted during the Renaissance and seventeenth century. Painters commonly made connections between images of the infant Moses and the young Jesus Christ escaping the Massacre of the Innocents. The four maidens on the left of this painting recall the shepherds in scenes of the Adoration and Thermutis’s pose derives from images of the Virgin. Poussin clearly revelled in painting this engaging work: the women are carefully arranged within an ordered composition, and he uses a variety of poses and expressions and vibrant colouring. An expensive ultramarine blue pigment is used for the green and blue robes as well as areas in shadow and the grey buildings.

The Finding of Moses

(Showing 6 of 14 works)
View all
A Bacchanalian Revel before a Term
Nicolas Poussin
In this wild party, men and women dance around a term – a carved bust of a bearded and horned man. This is traditionally identified as Pan, god of woods and fields, flocks and herds, although the statue could also be Priapus, god of gardens and fertility, who wears floral garlands and exposes his...
Room 29
Cephalus and Aurora
Nicolas Poussin
Aurora, goddess of dawn, is in love with the mortal Cephalus and tries to seduce him. Cephalus, dressed here in blue, turns away from Aurora, rejecting her advances. He gazes towards a portrait of his wife, Procris, held by a winged cupid. Later, when Cephalus and Procris are reunited, they each...
Room 29
Landscape with a Man killed by a Snake
Nicolas Poussin
A man has been crushed by a snake and lies dead beside a pond: his body is limp and his skin a greenish-grey. We see a man and woman whose gestures and movement show their fear and surprise. The way the landscape is constructed reveals the drama in stages: the running man sees the dead man and th...
Room 29
Landscape with a Man scooping Water from a Stream
Nicolas Poussin
A sandy path meanders through a landscape of dunes towards distant hills and mountains. An old man in blue with his back towards us occupies the foreground, a sack and water bottle lying beside him on the ground. He seems to be watching a younger man who bends to scoop water from a pool with a po...
Not on display
Landscape with a Man washing his Feet at a Fountain
Nicolas Poussin
In this picturesque landscape the bright blue sky and leafy trees reflect the warm climate. The path and river lead our eye towards the town in the distance. In the foreground, a seated man washes his feet in a fountain. On the right, a woman beside a shepherd points towards a large column, which...
Not on display
Landscape with Travellers Resting
Nicolas Poussin
A country track leads from the left foreground between two outcrops of tree-covered rocks, around a limpid pool and towards the distant mountains. In the foreground a man wearing a classical tunic rests by the side of the track. He looks towards a second man in the middle distance, who ties his s...
Not on display
Nymph with Satyrs
Nicolas Poussin
A beautiful nymph lying in the foreground seems to be asleep, although she may be enjoying a moment of solitary ecstasy. Beside her a golden-haired child watches as a satyr – a man with a goat’s ears, horns and legs – gently removes her delicate white robe. Another satyr peeps out from behind a t...
Not on display
The Adoration of the Golden Calf
Nicolas Poussin
In this scene from the Book of Exodus, a large gathering of Israelites worship a life-size statue of a golden calf, or what is actually a bull, which represents the Egyptian bull-god Apis. They have decided to worship a different, pagan god while their leader Moses has been away on Mount Sinai co...
Room 29
The Adoration of the Shepherds
Nicolas Poussin
Shepherds kneel and stand in order to praise the baby Jesus, watched by Joseph and the Virgin Mary. The stone archway frames an earlier episode: the same shepherds fall over in surprise as an angel appears in the clouds to announce Christ’s birth to them. Following an old tradition in painting, P...
Room 29
The Annunciation
Nicolas Poussin
The Archangel Gabriel announces to the Virgin Mary that she will give birth to the Son of God. The dove of the Holy Ghost hovers above her in a bright circle of light. The Virgin, with her eyes closed and arms outstretched, accepts her role as mother of Christ. Poussin’s treatment of this subject...
Room 29
The Nurture of Bacchus
Nicolas Poussin
The infant Bacchus, god of wine, drinks from a bowl into which a satyr squeezes grape juice representing wine. Paintings commonly show Bacchus as a drunken adult, but to show him drinking alcohol at this young age is unusual. Ovid’s Metamorphoses describes how Bacchus' aunt Ino watches over him....
Room 29
The Triumph of Pan
Nicolas Poussin
In this chaotic woodland party, men and women dance, drink, play music and behave badly. They gather around a statue of a red-faced satyr with horns, which may represent Pan, god of shepherds and herdsmen, or Priapus, god of gardens. Both deities are linked to the mischievous god of wine, Bacchus...
Room 29 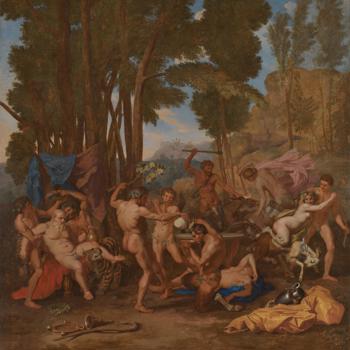 The Triumph of Silenus
After Nicolas Poussin
This playful scene celebrates Silenus, Greek god of wine and drunkenness, and companion to the god Bacchus. Silenus, a fat naked old man with a bald head, sits slumped on a throne to the left, supported by two men. Too drunk to stand, he balances one leg precariously on a tiger. The partygoers re...
Not on display
The Holy Family with Saints Elizabeth and John
After Nicolas Poussin (?)
The Virgin’s cousin Saint Elizabeth kneels to present the infant Saint John the Baptist to the Christ Child, who is held by his mother. With its warm colours, golden light and sweet interaction between two infants, this intimate scene is very touching. Saint Joseph leans on what looks like a long...
Not on display
You've viewed 6 of 14 paintings