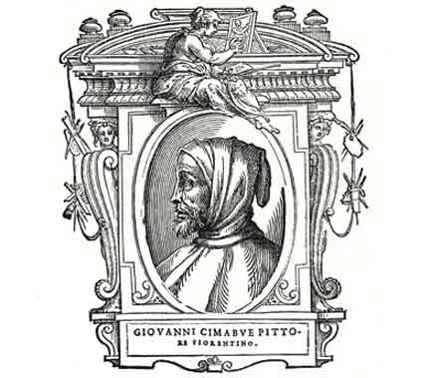 Cenni di Pepi, called Cimabue, is first recorded in Rome in 1272 where he is referred to as a 'Florentine painter'. Together with the younger Duccio and Giotto, Cimabue was one of the pioneering artists of the early Italian Renaissance. Cimabue's only documented work is the apse mosaic of 'Saint John the Evangelist' in the Duomo (cathedral) in Pisa of 1301 and 1302. His surviving works include the Santa Trinita 'Maestà' (about 1280, Uffizi, Florence), frescoes in the Lower Church of S. Francesco, Assisi and the now ruined 'Crucifix' in Santa Croce, Florence.

His works represent a crucial moment in the history of art when Italian painters, while still influenced by Byzantine painting, were exploring the naturalistic depiction of forms and three-dimensional space.

The Virgin and Child with Two Angels
Cimabue
This is one of only two small-scale works by Cimabue, rediscovered in 2000. Soon after this, a link was made between it and a panel in the Frick Collection, New York, which depicts the Flagellation. They were both probably part of a much larger panel painted with small images showing the events l...
Room 51