Skip to main content
Key facts
A Lady with a Squirrel and a Starling (Anne Lovell?)
Hans Holbein the Younger
/

A solemn woman wearing a soft cap of dense white fur sits with a red squirrel in her lap and a glossy-feathered starling at her shoulder. Common pets in the fifteenth-century, these animals also have a symbolic meaning and serve as clues to the sitter’s identity. She is thought to be Anne Lovell, whose husband, Sir Francis Lovell, was employed at the court of Henry VIII, King of England.

The starling is probably intended as a rhyming pun of East Harling, where the family had recently inherited a large estate. Squirrels nibbling on nuts feature on the heraldry of the Lovell family: the windows of the church at East Harling include two of the family’s coats of arms in stained glass, each showing six red squirrels. The commission may commemorate the birth of a son to the couple in the spring of 1526, but it also showed off their new status as wealthy landowners.

The German-born painter Hans Holbein the Younger made this portrait during his first visit to England from 1526 to 1528. In this time he developed his reputation as a portraitist, becoming the most sought-after painter in the country. This enigmatic painting expresses the desire and ambition of Holbein’s patrons as well as showing off his skill in creating striking compositions and emulating a range of textures.

A solemn woman in a white cap made of dense fur sits with a red squirrel in her lap and a glossy-feathered starling at her shoulder. The half-length view, typical of Holbein’s portraits of English sitters, creates an intimate image which focuses on the woman’s facial features and the details of her clothing. Her outfit is simple but made up from a variety of different materials, each of which Holbein has observed carefully. The fine white linen chemise is almost transparent in contrast to the thicker folded shawl; its edges are defined by thin wavy black lines, something Holbein did to emphasise the crispness of a fabric (he often used this method in frilled cuffs, for example, as in his portrait of Christina of Denmark). The white fabrics appear grey in shadow, giving a sense of three-dimensionality which emphasises the geometry of the fur cap and the curve of the shawl around the sitter’s shoulders. This prominent shadow and the three-quarter turn of the sitter’s torso also separate her from the plain background, its intense colour contrasting with her monochrome clothing.

As in all of Holbein’s portraits, the sitter’s facial features and figure are made up of decisive contours, a graphic style which mirrors that of his numerous preparatory portrait sketches (the majority of which are in the Royal Collection). The use of strong lines and colours created striking and memorable images, while the accuracy of drawing and close observation of textures and materials gave a lifelikeness never seen before. The portrait follows a formula that Holbein was using at the time: there is little space around the sitter’s head and body, she faces to the right at a three-quarter angle, her right arm runs almost parallel with the lower edge of the picture and her hands are positioned at the very corner of the picture. The blue background, which is here made up of azurite (a natural mineral pigment) mixed with white, was also a common feature of his paintings. It was used by other German painters at this time too – see, for example, Hans Baldung Grien’s Portrait of a Man.

Holbein’s process for creating portraits involved making a drawing of the sitter from life and transferring it onto panel before beginning to paint. He would put a piece of paper covered in charcoal face down onto the panel, then place the drawing over the top. By applying pressure to the outlines of the drawing, its contours would be transferred in charcoal onto the panel. Holbein would then use these charcoal lines as a guide, painting over them in order to create the image. Occasionally he diverted from the drawn design, but in this case he seems only to have changed the position of the structured fur cap and altered the hairline slightly. The drawings from life usually included just the sitter’s head and shoulders; hands were most probably added later, and were not necessarily drawn from the sitter. Those in this portrait, for example, are not particularly feminine – Holbein might have formulated them from different drawings of hands.

This painting is in excellent condition, making it easy to admire Holbein’s technique for painting the array of textures – the softness of the fur cap, the cool metal links of the squirrel’s chain, which falls loosely through the woman’s fingers, and the silky plumage of the bird at her shoulder. He has achieved these effects through his expert understanding and control of oil paint, using a range of different techniques. For example, the folded edges of the white shawl were created by indenting the paint using the wooden end of a paintbrush and partially filling the depressions with fine lines of black paint. The Russian ermine fur cap is made of a series of small pelts sewn together; Holbein has described the joins by applying layers of wet paint in various shades of grey-brown.

The animals were probably added at a late stage, after the woman was painted. X-ray photographs of the picture show a belt, which was covered when Holbein decided to change the position of the woman’s arm, possibly because he thought a higher position would make a more appropriate perch for the squirrel. Nonetheless, the squirrel and the starling are key elements of the picture. Common pets in the fifteenth-century, these animals also have a symbolic meaning and serve as the clues to the sitter’s identity. She is thought to be Anne Lovell, a wealthy and well-connected woman whose husband, Sir Francis Lovell, held the title of ‘esquire of the body’ (a personal attendant) to Henry VIII, King of England. In 1526, Francis became sheriff of Norfolk.

The portrait was most probably commissioned to commemorate a series of important moments in the lives of the couple. Sir Francis inherited an estate at East Harling from his uncle, Sir Thomas Lovell, in 1524. The starling is probably intended as a rhyming pun of East Harling, while squirrels nibbling on nuts, like this one is, feature on the heraldry of the Lovell family. The windows of the church at East Harling include two of the family’s coats of arms in stained glass, each showing six red squirrels; the animal also appears on the Lovell family tombs in the church. The portrait, by the most sought-after portraitist in the country and with its references to the family’s name and estate, underlined Francis’s new status as wealthy landowner. A more specific reason for the commission may be to commemorate the birth of a son, named Thomas, to the couple in the spring of 1526. It has been suggested that the squirrel stands in for the infant, who would carry the family name and inherit the Norfolk estate.

A Lady with a Squirrel and a Starling (Anne Lovell?) 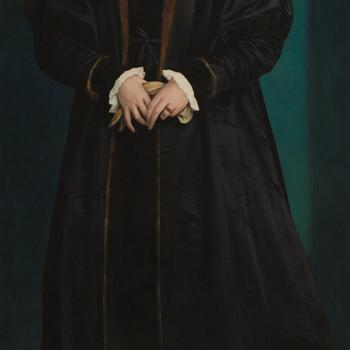