At its most fundamental, paint has two basic constituents; pigment and binding medium (such as egg, oil or glue). Oil was the most commonly used medium in the 17th century.

The drying oils used as the medium for oil paint are able to react chemically (polymerise) in air to form a solid film.1 The most widely used oils in Europe in the 17th century were obtained from flax seeds (linseed oil) or extracted from walnuts.

Sometimes these oils were thickened, either by heating (heat-bodying) or by leaving to stand for a period of time (without heating).2 This produces more viscous oils, better able to maintain their volume upon drying and which, consequently, form paint films that are less likely to wrinkle. Depending on the exact method of treatment, and the choice and amount of pigment added, the modified oil can be used to form areas of impasto or to produce particularly smooth, glossy paint films.3 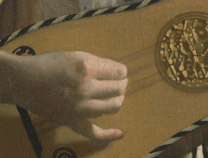 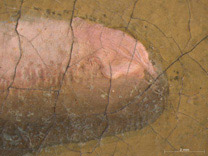 fig.2 Photomicrograph of 'The Guitar Player' showing loose impasto of paint used for her finger. 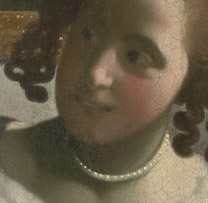 fig.3 Detail from 'The Guitar Player'. 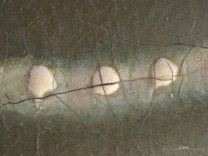 fig.4 Photomicrograph of 'The Guitar Player' showing impasto paint used for the pearls.

The oil and pigment are ground together until the pigment particles are thoroughly combined with the oil and the paint is a thick, homogeneous, glossy paste; the painter can add a little more oil during work as required (pigments vary as to the amount of oil they need to make a workable paint).

Pigments can alter the drying (polymerisation) process of the oil in different ways, with lead- or copper-containing pigments (such as lead white or verdigris) considered to be 'good' driers,4 while lake pigments and ultramarine are generally considered to be 'poor' driers i.e. the normal drying process is disrupted.5 The addition of a 'good' drier to a paint which also contains 'poor' drying pigments will aid the drying process, and if added in sufficiently small quantities, may have a minimal impact on the overall colour of the paint layer (see Drying and paint defects).6

Recent analysis of paint samples by researchers in the Scientific department at the National Gallery using a technique known as gas chromatography-mass spectrometry (GC-MS) has shown that the binding medium of the ground layer in Young Woman standing at a Virginal is a heat-bodied linseed oil (also see Support and ground). A sample of dark-coloured paint obtained from the background to the right of the chair at the lower right-hand edge of the picture was also bound with a heat-bodied linseed oil. In fact, linseed oil is by far the most common binder found in 17th-century Holland and has been identified at the National Gallery in works by Jan Steen and others.7

The use of another binder, heat-bodied walnut oil, in 'Young Woman standing at a Virginal' was also confirmed by analysis. This was identified in a sample of white paint from an area of thick impasto, depicting the light entering the window at the upper left edge of the painting. Walnut oil was considered to yellow less during ageing,8 and was therefore traditionally recommended for use with pigments whose colour was particularly affected by yellowing of the medium, such as whites and blues. Although analysis of paint samples from a variety of Dutch 17th-century works indicates that, in practice, this advice was not always followed,9 the choice of walnut oil as the binder for white paint has been observed in samples from several paintings by Ferdinand Bol .10

The limited sampling opportunities inherent in working with such precious objects restrict the extent to which general conclusions can be formed regarding Vermeer ’s choice of paint binder. However, the detection of both linseed and walnut oil binders has also been reported from analysis of a few samples taken during the scientific analysis of some other works by Vermeer. In 'The Art of Painting' (Kunsthistorisches Museum, Vienna), walnut oil was identified as the binder in a sample of white paint, while linseed oil was identified in a paint sample described as blue-green in colour.11 No white paint was analysed during the examination of a 'Girl with a Pearl Earring' (Mauritshuis, The Hague), but linseed oil was identified as the binder in both a sample from the ground layer and from the dark background.12

1. The drying of oil paint is an entirely chemical process which results in a physical change from liquid to solid. Drying oils consist of triglyceride molecules containing unsaturated fatty acids which react with oxygen and subsequently cross-link, forming a three-dimensional network. Although the paint will be 'touch-dry' after a period of weeks, this is just the beginning of the cross-linking process which continues over a timescale of years, with the initial rubbery solid hardening to give a tough, durable film.

2. From a chemical perspective, the characteristic feature of these thickened oils is that the polymerisation reactions by which the triglyceride molecules join together have already begun.

3. The thickening (or pre-polymerisation) of the oil raises its refractive index with respect to an unmodified oil. This has the effect of reducing the relative difference in refractive index between the medium and pigment, producing a glossier, more transparent paint which can contribute to the effectiveness of glaze layers.

4. An increase in the drying rate of oil is found in paints containing pigments with a metal capable of affecting the oxidation or polymerisation process. The precise mechanisms involved are complex; see for example, C. S. Tumosa and M. F. Mecklenburg, 'The Influence of Lead Ions on the Drying of Oils' in 'Reviews in Conservation', vol. 6 (2005), pp. 39–47.

5. Pigments regarded as 'poor' driers generally contain metal compounds which, for a variety of reasons, are unable to promote the oxidation or polymerisation of oil. In addition, chemical processes which retard the drying of oil are also likely to be important. The exact nature of these reactions will depend on the pigment.

8. Fresh walnut oil is paler and less yellow in colour than linseed oil and contains far less of the reactive linolenic acid. The chemical reactions involved in the long-term yellowing of oil which occur with age and oxidative degradation are linked to the presence of reactive functional groups and can therefore be more pronounced in the linolenic acid-rich linseed oil.

Image above: Detail from Johannes Vermeer, 'The Guitar Player', about 1672. On loan from English Heritage, The Iveagh Bequest (Kenwood). Photo © The National Gallery/ courtesy English Heritage.