Image: Detail from Johannes Vermeer, 'A Young Woman seated at a Virginal', about 1670-2

Gas chromatography – mass spectrometry is a technique for the separation and detection of chemical components from complex mixtures. It is suited to the analysis of small quantities of material and is therefore ideal for providing detailed chemical information on the organic materials found in paint samples. 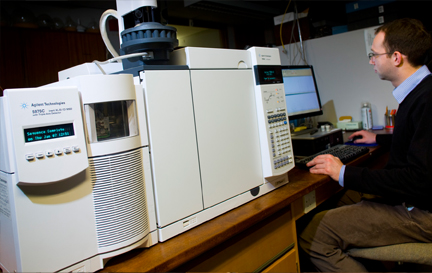 The gas-chromatograph separates a sample into its individual chemical components. The sample is vaporised before passing into a heated capillary column which has a special chemical coating on the inside. A stream of inert gas carries the sample through the column and the chemical components interact with the coating to different degrees depending on their molecular structure. This means they pass through the column at different rates, exiting the column sequentially where they are detected using the mass-spectrometer.

The mass-spectrometer determines the molecular mass of the separated chemical components. A fuller identification is gained by measuring the masses of each of the fragments produced when the molecules break apart. Each molecule gives a characteristic pattern of masses known as a mass spectrum. This type of combined separation and molecular fingerprinting technique is particularly valuable for the identification of natural products such as waxes and resins, where specific molecular indicators can distinguish between different species. It can also be used to distinguish the different drying oils in paint samples, such as linseed and walnut oil.

This is another separation technique for the organic components from complex mixtures. Unlike gas chromatography, the separation is carried out in a liquid at room temperature, rather than in a heated inert gas. The technique permits the analysis of small samples and is particularly suited to the identification of organic dyestuffs in lake pigments, although it was not used in the present study. 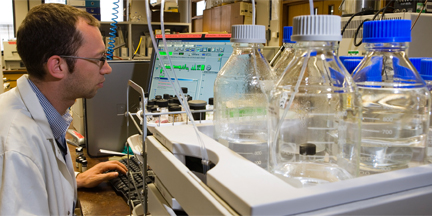