Image: Detail from Johannes Vermeer, 'A Young Woman standing at a Virginal', about 1670-2

The granular surface in some areas of Vermeer's paintings has sometimes been interpreted as a deliberate painting technique designed to refract light.1 However, under magnification the effect is shown to be the result of lumpy particles protruding through the paint surface. In Young Woman standing at a Virginal, these forms are clearly visible in the paint of the frame of the inset landscape painting [ figs.1 & 2]. 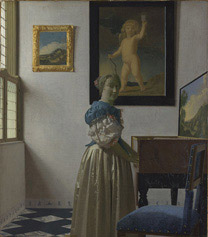 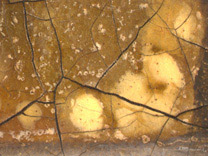 In 'The Music Lesson' (Royal Collection) they can be seen in the woman's sleeve and yellow jacket [ figs.3 & 4], while in The Guitar Player they are evident in the tablecloth and also in the curtain; the sky of the inset painting and in the shading of the yellow jacket [ figs.5 & 6]. These particles are often rounded but sometimes have elongated forms and associated abrasion of the surface. 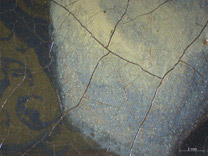 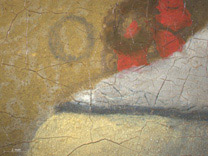 fig.4 Photomicrograph of 'The Music Lesson' showing yellow jacket with eruptions of what appear to be lead soaps. 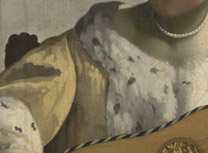 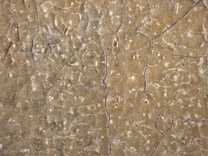 fig.6 Photomicrograph of 'The Guitar Player' showing brown shading of the jacket to the left of her ermine collar. Lead soaps can be seen protruding through the paint layer.

At first sight these features resemble lead soaps, a well-known alteration product caused by the interaction of lead pigments such as lead-tin yellow and red lead with an oily binding medium,2 and in some areas this does indeed seem to be the case. So, for example, one of the paint samples taken in 1967 from the pale fur of the guitar player's sleeve shows pale semi-translucent particles erupting through the grey highlight from the pale brown lead-tin yellow containing paint layer below [ fig.7].

fig.7 Paint cross-section from 'The Guitar Player' taken from the ermine cuff of her jacket at the edge of the painting.

New analysis, carried out by ATR/FTIR , firmly identified these eruptions as lead fatty acid soaps. These soaps agglomerate so that pustules are formed which can eventually become so large that they protrude through the upper layers to the surface of the painting. Both the visible light and backscattered electron SEM images [figs.8–10] show the pustule pushing through the upper lead white-based paint layer from the layer beneath. The FTIR spectrum taken from the translucent region of the protruding aggregate is characteristic of a lead soap.3

In other areas of the painting, where no lead-tin yellow or red lead pigments are present, the occurrence of the raised lumpy aggregates is more difficult to explain.

Though lead white, present in both the ground and paint layers is also known to react with fatty acids to form soaps, this reaction has generally been found to be much slower than with lead-tin yellow and red lead, with only low levels of lead soaps spreading throughout paint layers rather than forming large aggregate structures.4

In all four paintings the canvas was prepared with one or two layers consisting of lead white combined with chalk, earth pigments and bone black in an oil medium. None of these pigments would be expected to form lead soaps of aggregate structure. However, re-analysis of one of the archived paint samples taken from a pale blue-grey area of one of the tiles in the foreground of 'Young Woman Standing at a Virginal' revealed an additional component which may help to explain their composition.

X-ray mapping and spot analyses of this sample revealed two discrete areas which are rich in zinc and sulphur and which appear to be forming a large aggregate structure which is beginning to push up from the upper ground into the paint layer. This is clearly shown in a backscattered electron image of the sample overlaid with an X-ray map of zinc in red [ figs.11–13].

Zinc is also known to react with fatty acids to form large soap aggregates. Unfortunately in this instance ATR/FTIR analysis was unable to confirm the presence of zinc soaps as the sample surface is not perfectly flat and the area in question could not be brought into contact with the microscope objective. This can often happen, particularly with very old paint samples.

However, recent work in the National Gallery Scientific department has confirmed the presence of zinc soaps in a number of other paintings. In some examples the zinc has been found to be a component of a red lake pigment but in other cases it seems likely that zinc sulphate (known in historic technical literature as 'zinc vitrol') was probably added to oil paint since it was thought to aid drying.5 Though lead pigments also function as driers, zinc sulphate may have been added to speed up the drying process.

Despite careful examination and analysis, the presence of zinc has not yet been confirmed in any of the other samples from these four paintings. However, the number of samples is quite limited and as the raised aggregates are large they would not generally have been included in tiny paint samples (see Altered appearance of ultramarine).

1. In a number of instances it has now been shown that granular texture in the paint is likely to be due to the alteration of original materials, such as in the formation of lead soaps. For a discussion of this issue, see E. Reissner, 'Texture, Transparency and Opacity in the Writing of Art History: Approaches to Materiality in the Study of Netherlandish Painting of the Seventeenth Century' in 'Zeitschrift für Kunsttechnologie und Konservierung', vol. 26 (2) (2012), pp. 448–61.

4. Lead soaps have been identified in samples taken from 'The Art of Painting' (Kunsthistorisches Museum, Vienna). However in this instance the soaps have not formed massive aggregate structures protruding from the surface of the paint. See J. Boon and E. Oberthaler, 'Mechanical Weakness and Chemical Reactivity Observed in the Paint Structure and Surface of "The Art of Painting"' in 'Vermeer "Die Malkunst": Spurensicherung an einem Meisterwerk', exh. cat., Kunsthistorisches Museum, Vienna 2010, pp. 235–53, especially p. 237.