Vermeer's canvases were stretched over a wooden 'strainer' – a rectangular framework with fixed corners.1 As canvas ages it gets brittle and fragile and so most canvas paintings have been lined – that is, new canvas has been stuck behind the original to help support the picture. When this happens the original strainer is usually discarded and a new stretcher (a similar wooden framework but adjustable at the corners) used instead.

The Guitar Player is unusual in never having been lined and so the original canvas and strainer are visible. It is also possible to see that tiny wooden pegs were used to attach the canvas to the strainer of the painting, rather than metal tacks as used today [figs.1–3].

The slight unevenness in weave of a handmade canvas produces subtle changes of weave density across the surface [ fig.4]. A recent study has digitally mapped the canvas in 29 works by Vermeer, allowing for thread count and weaving anomalies to be matched. As a result, a small number of canvas weave matches have been proposed, for example it has been suggested that 'The Lacemaker' (Louvre, Paris) and 'Young Woman seated at a Virginal' (acquired by Baron Rolin in 1960) were painted on canvas from the same bolt of fabric.2 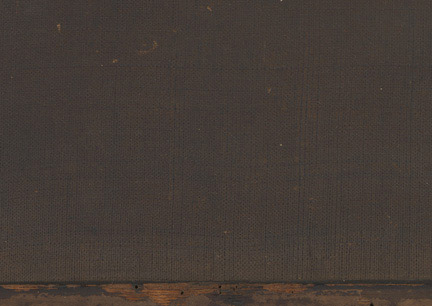 The canvas was prepared with a coloured ground. The two National Gallery paintings, NG1383 and NG2568, have very similar grounds, consisting of lead white combined with chalk, earth pigments, bone black and charcoal black in a linseed oil binder (see Binding medium). Both have two layers: the lower is pale grey-brown; the upper, a light coloured pinkish-brown containing a higher proportion of earth pigments and less black than the lower layer. By contrast, 'The Guitar Player' and 'The Music Lesson' (Royal Collection) have a single pale grey-brown layer rather similar in appearance to the lower ground present in the National Gallery paintings. Some of the inclusions of chalk and lead white are extremely large. This is particularly notable in 'The Music Lesson' where some substantial agglomerates of lead white (one measuring 175 x 120 μm is visible at the right side of the cross-section) and chalk (the translucent fragment measuring 125 x 75 μm at centre left) are clearly visible [figs.5–9]. This combination of lead white and chalk may be due to the common practice of extending lead white which was described in contemporary sources. For example, the 'De Mayerne' manuscript (1622–44) notes that the pigment 'céruse commune' is one part lead white combined with one part chalk.3

Though it is perfectly possible that in impecunious times Vermeer may have primed canvases himself, the ready availability of prepared canvases in 17th-century Holland, the lack of a large studio workshop and the conformity in size of clusters of his paintings indicate that Vermeer probably purchased pre-prepared canvases.4

The double ground of our two paintings may be suggestive of Vermeer’s desire to change the colour of a pre-prepared canvas. This change could have been made by Vermeer himself, or equally well, by the canvas supplier at Vermeer’s request. Quick drying of a secondary ground would be crucial for the artist to commence painting and 17th-century treatises describe methods to speed up the drying of priming layers, suggesting a number of siccatives including lithage, minium, smalt (cobalt in smalt acts as a drier),5 varnish and earth colours (umber contains manganese dioxide and functions as a catalyst to drying).6

In this respect it is significant that areas rich in zinc and sulphur have been identified in the upper ground layer of Young Woman standing at a Virginal [ figs.10–12]. Zinc sulphate (known in historic technical literature as zinc vitrol) was probably added to this secondary ground layer since it was thought to speed up drying (see Formation of lead and zinc soaps).

The cross-section shows a white paint layer penetrating into voids in the ground – perhaps indicating that, in this case, some time had elapsed between application of the ground and paint layers. Ten of the painter's canvases are listed in the inventory of Vermeer’s studio following his death.7 Though it was probably commonplace to have a number of ready canvases, 10 is a fairly substantial number for an artist who completed only two or three paintings each year and indicates that the canvases may have remained in the studio for some considerable time before use.

1. All canvases examined in a study by Nicola Costaras have a closed plain weave. Where analysed, the fabric was found to be linen. See N. Costaras, 'A Study of the Materials and Techniques of Johannes Vermeer', in I. Gaskell and M. Jonker, eds, 'Vermeer Studies', New Haven and London 1998, pp. 145–67.

3. Extenders such as chalk, which is colourless when mixed with an oil binder, can change the working properties and translucency of the paint and can also decrease the amount of pigment required.See M. Stols-Witlox, '"The Heaviest and the Whitest": Lead White Quality in North Western European Documentary Sources, 1400–1900' in M. Spring, ed., 'Studying Old Master Paintings: Technology and Practice. The National Gallery Technical Bulletin 30th Anniversary Conference Postprints', 2011, pp. 284–94.

4. There are a number of groups of similarly sized canvases — details and measurements are provided by Costaras, see footnote 1. See also, K. Levy-Van Halm, 'Where Did Vermeer Buy his Painting Materials? Theory and Practice' in 'Vermeer Studies', New Haven and London 1998, pp. 137.

5. The use of smalt to speed up drying is interesting in respect to identification of smalt in underpaint in 'The Procuress', 1656 (Gemäldegalerie Alte Meister, Dresden).