Image: Detail from Johannes Vermeer, A Young Woman seated at a Virginal, about 1670-2

Lake pigments were an essential constituent of the 17th-century Dutch artist's palette, despite being light-sensitive and liable to fade.1 Translucent and usually strongly coloured, the red lakes were typically used as glazing pigments over another paint layer, giving depth and richness to shadows and other areas of the painting. The yellow lakes were often used in a more unobtrusive manner, in mixtures to give greens or to give life to a duller yellow pigment such as a yellow earth. Many pigments available at this time were obtained from a mineral source (see Vermeer's palette). However, the colouring components of red and yellow lake pigments originated from organic dyestuffs, precipitated onto a white or colourless substrate.

The source of the red organic dyestuffs could be plant or animal in origin; dyestuff could be extracted from the roots of the madder plant, for example, or from scale insects such as Mexican cochineal. Yellow dyestuffs were extracted from plant sources, including weld, dyer's broom and unripe buckthorn berries.2

The simplest and most direct method used to extract the dyestuff from the raw material was with water or an alkaline solution commonly prepared from wood or other plant ash. The colouring components could also be obtained from shearings of dyed cloth or other textile waste rather than the raw materials themselves, in which case an alkaline solution would have to be used to extract the dyestuff. The soluble dyestuff components were then converted into the insoluble lake pigment by the addition of alum (potassium aluminium sulphate).3 In the case of yellow lakes, some form of calcium carbonate, such as chalk, was frequently a major ingredient.4

Identifying the dyestuff used in a lake pigment can be problematic as it may be present in very small amounts. Red dyestuffs such as cochineal have a high tinting strength which is one reason why the pigments are so effective although the amount of colouring matter actually used to make the pigment may have been quite small. To make matters more difficult, the colouring components are also particularly light-sensitive, so frequently there is little dyestuff remaining in the paint. However, it is often possible to confirm the presence of a now faded lake pigment in the paint sample because the substrate still remains.5 Nevertheless, dyestuff components characteristic of cochineal (red) and weld (yellow) have been identified in paintings by Vermeer,6 and other 17th-century Dutch artists, including Rembrandt and Aelbert Cuyp. These components were detected using a technique called high performance liquid chromatography (HPLC). No lake-containing samples suitable for analysis by HPLC could be obtained from the Vermeer paintings examined during the present study.

The typical use of red lakes as a glazing pigment over another layer of paint is difficult to confirm in the paintings examined here. Red lake pigments were, however, employed by Vermeer in mixtures, for example, with ultramarine to give purples and with lead white for pinks (see Red lake section in Vermeer's palette).7 In purple paint, such as that used for the leaded window lights or the man's sash in 'The Music Lesson' (Royal Collection), where red lake has been combined with ultramarine and applied over a dark underlayer, the pigment is less likely to fade as there is little internal reflection of light within the paint. In mixtures of red lake and lead white, such as in the design on the chair back in Young Woman seated at a Virginal, the opposite is true and the fading can be quite severe, depending on the proportion of white pigment present. 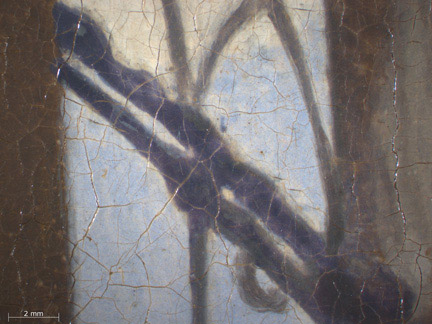 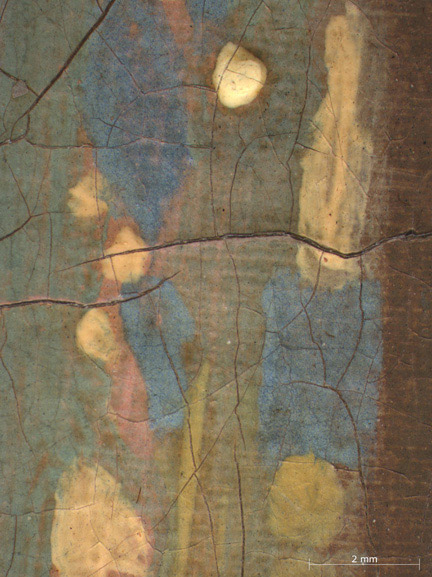 fig.2 Photomicrograph of Johannes Vermeer, 'A Young Woman seated at a Virginal', NG2568, about 1670–2. Showing the use of red lake for the patterned upholstery of the chair.

The pale yellow sleeve of the woman in The Guitar Player contains a large amount of chalk, together with a small amount of lead-tin yellow. The most likely reason for chalk to be present is that it formed the substrate of a yellow lake, but the yellow dyestuff has now almost completely faded; probably the colour of the jacket was originally a stronger yellow (see Yellow lake section in Vermeer's palette). 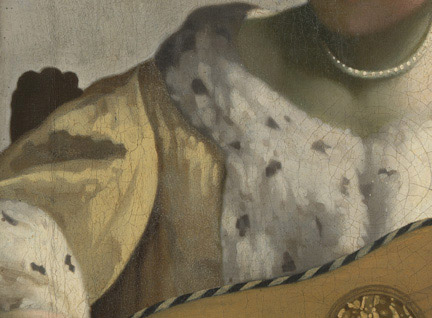 The fading of the colouring components over time can, in some cases, alter the appearance of paint passages containing lake pigments considerably. In an example from 'Young Woman seated at a Virginal', the presence of chalk in a sample from the woman's skirt is indicative of a now faded yellow lake. The present pale yellowish-brown colour is largely due to overpaint and discoloured varnish. In addition, the paint surface has blanched – it has a white, powdery appearance – and deteriorated.8 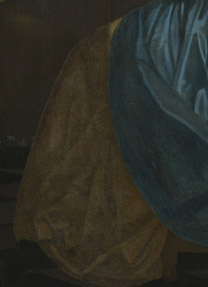 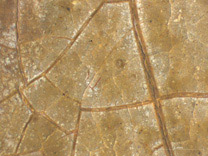 fig.5 Photomicrograph of NG2568 showing the pale yellowish brown of the skirt.

Although the original colour of the skirt is difficult to establish, analysis showed that the yellow lake pigment was combined with a little bone black (see Yellow lake section in Vermeer's palette). This suggests that the underskirt was originally a slightly greenish-yellow or light olive green; a colour which would have blended well with the blue-green overskirt.

1. For a discussion on the effects that the fading of lake pigments has on the present appearance of paintings in the National Gallery Collection, including Dutch 17th-century works, see D. Saunders and J. Kirby, 'Light-induced Colour Changes in Red and Yellow Lake Pigments' in 'National Gallery Technical Bulletin', vol. 15 (1994), pp. 79–97.
http://www.nationalgallery.org.uk/upload/pdf/saunders_kirby1994.pdf

3. An in-depth analysis of the influence of the method of making red lake pigments on their substrates can be found in, J. Kirby, M. Spring and C. Higgitt, 'The Technology of Red Lake Pigment Manufacture: Study of the Dyestuff Substrate' in 'National Gallery Technical Bulletin', vol. 26 (2005), pp. 71–87.
http://www.nationalgallery.org.uk/upload/pdf/kirby_spring_higgitt2005.pdf

7. It is rare to find that all the red lake pigment particles in a paint layer have faded to the extent that they are completely colourless. Usually some colour remains, particularly in the larger particles. The particles can thus be seen by optical microscopy and the substrate can be identified by SEM-EDX analysis.

8. Severe deterioration of the paint has also been observed in passages from several paintings by the 17th-century Dutch artist Aelbert Cuyp which contained large amounts of chalk from a yellow lake (see reference in footnote 4). The causes of blanching are complex and it is likely that the fading of the lake is not the only process contributing to the deterioration of the paint.