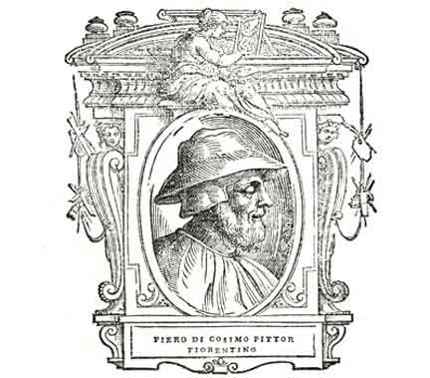 Born in Florence, Piero is recorded in the studio of the painter Cosimo Rosselli in 1480, from whom he took his second name. He was later much influenced by Leonardo da Vinci. He was known as an idiosyncratic and imaginative painter. Vasari says he loved animals and plants.

He was something of a pioneer in the development of evocative landscapes in Italy. Vasari says Piero travelled to Rome in 1481-2 with Rosselli to work on three frescoes commissioned for the Sistine Chapel. Piero probably painted the landscape for the 'Sermon on the Mount'.

In about 1487 Piero received a commission from Francesco del Pugliese for decorations in his new palace. The pictures were probably friezes above wainscoting, and the National Gallery's 'Lapiths and Centaurs' may have been part of this cycle.

Piero di Cosimo acquired a reputation in Florence as a designer of processions and pageants. His 'Triumphal Chariot of Death' for the 1511 carnival made a deep impression. He trained Andrea del Sarto. It is thought that his figure groups may have been a source for the Pollaiuolo brothers and later Michelangelo. In later life he became increasingly reclusive.