In 2000, Auerbach participated in the exhibition, ‘Encounters’, held by the National Gallery to mark the millennium. Twenty-four of the world’s leading contemporary artists were invited to create a new work in response to a painting in the Gallery’s collection. With Auerbach’s versions of paintings by Rembrandt, Rubens, and Titian already having been exhibited at the National Gallery in 1995, the exhibition curators were perhaps imagining that the artist would choose another painting in the collection to work from. However, Auerbach instead offered a townscape that he had recently finished. ‘Park Village East’ is one of several paintings of the same area of London that Auerbach made between 1994 and 1999. Whilst working on this painting, Auerbach noticed compositional similarities with Constable’s ‘The Hay Wain’, a picture he must have drawn from dozens of times, including his first visits to the Gallery in his student years.

The process in making ‘Park Village East’ always began with an on-site drawing and then returning to the studio, a three-minute walk away, to paint. The drawings would be pinned up on the wall, with new ones replacing older ones. For this painting there were probably about three hundred drawings made in total. Comparison with drawings made from Constable’s ‘Hay Wain’ eloquently shows the points in common, although Auerbach is at pains to point out that any similarity between his painting and Constable’s is not a result of any conscious decision or comparable subject matter, rather it is the sense of compositional structure that attracted him to Constable’s work. Indeed, once he had noticed the similarities the artist attempted to resist them but concedes that nevertheless they are there. 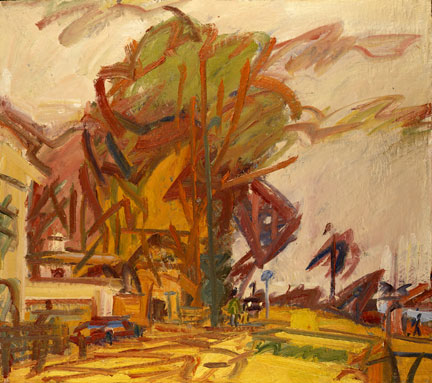 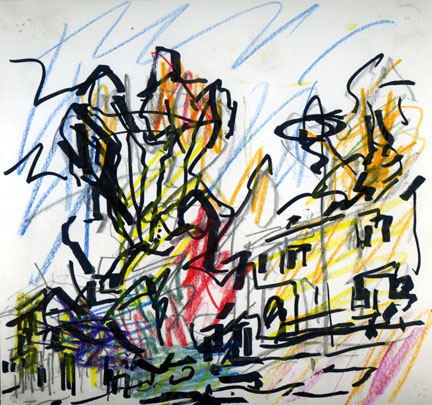 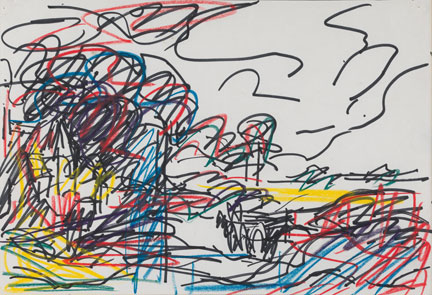