The view is of the millpond at Flatford on the River Stour. Flatford Mill was a watermill for grinding corn, operated by the Constable family for nearly a hundred years. It still survives and is about a mile from Constable’s birthplace at East Bergholt, Suffolk. The house on the left also survives; in Constable’s time it was occupied by tenant farmer Willy Lott.

The title, The Hay Wain, refers to the wooden wagon (wain) used for transporting cut and dried meadow grass (hay). The empty wagon is making its way through the shallow water to cross to the meadow on the other side where haymakers are at work.

Although the painting evokes a Suffolk scene, it was created in the artist’s studio in London. Working from a number of open-air sketches made over several years, Constable then made a full-size preparatory oil sketch to establish the composition before painting the final picture.

This is the third of the large landscapes set around the River Stour that Constable exhibited at the Royal Academy between 1819 and 1825. The Hay Wain was shown in 1821, the year after Stratford Mill. His determination to capture the rural Suffolk landscape of his boyhood in these monumental paintings must in part have been due to a sense that this way of life was changing due to rapid industrialisation – the factories, steam power and locomotives that appear in works by his contemporaries, such as Turner, are absent from Constable’s paintings.

The view is of the millpond at Flatford. Flatford Mill was a watermill for the grinding of corn, leased and operated by the Constable family for nearly a hundred years. It still survives and is about a mile from Constable’s birthplace at East Bergholt, Suffolk. In The Hay Wain, the mill is out of sight – we just glimpse the edge of its red brick wall on the extreme right. The building on the left of the picture is the house, which also still survives, occupied during Constable’s time by the tenant farmer Willy Lott. Although Constable’s parents moved from the mill house to a residence in East Bergholt before he was born, he would have known this view of Willy Lott’s house extremely well.

The painting’s title refers to the wooden wagon (wain) used for transporting cut and dried meadow grass (hay), which is used as animal feed over the winter. The empty wagon is making its way through the shallow millpond towards a ford across the stream – the ‘flat ford’ that gave Flatford its name. The front wheel of the wagon is already turning to the right towards the ford which will enable it to cross to the meadow on the other side. There haymakers are at work: one sharpens his scythe, others are pitchforking hay into an already laden wagon in the distance. It is just possible to make out one man stacking the load from the top.

Although the painting evokes a Suffolk scene, it was created in the artist’s studio in London. Over the years, Constable had made many drawings and oil sketches of Willy Lott’s farmhouse; its red roofs and chimneys, whitewashed walls and brick buttresses appear in several of Constable’s Stour scenes. His earliest oil study of it was probably painted in 1802. When painting The Hay Wain, Constable referred back particularly to three small oil sketches of the house he had made in 1811. The woman stooping over the water from the step outside Lott’s house with a pitcher beside her was retained in the same pose and position in the final picture. Constable made a small preliminary oil sketch showing the hay wagon itself in about 1820 (Yale Center for British Art, New Haven). This was followed by a full-scale oil sketch to develop the composition (Victoria and Albert Museum, London), which Constable painted quickly with large areas of the brown ground of the canvas left bare. The horse and rider in the foreground of the oil sketch were kept in the final picture but painted out at a late stage.

The small empty boat on the right is based on a study Constable made in 1809 – already used in The White Horse (National Gallery of Art, Washington) in 1819 and later used again in Salisbury Cathedral from the Meadows (Scottish National Gallery, Edinburgh) of 1831. It demonstrates Constable’s economy with his source materials, his instinct for local detail and his ability to balance a composition – for small though it is, the boat balances the house on the left and the hay wagon in the centre. The thick red fringes decorating the horses‘ leather collars add a bright note of colour.

Scenes showing a cart going through a ford recur in seventeenth-century Flemish and Dutch landscape paintings. Constable admired these works for their depiction of the natural rather than classicising landscape that were fashionable in his day. The 1838 sale of Constable’s pictures that took place after his death included two landscapes by Jan van Goyen, one with travellers in a cart, one with wagons descending a hill. Constable was probably encouraged that Flemish painters had made such unheroic events the subjects of their pictures. He had also studied Rubens’s An Autumn Landscape with a View of Het Steen and admired it greatly. The oddly Flemish appearance of the wagon and the breadth of the composition in The Haywain may owe something to Rubens’s influence. The wagon does not conform to the usual design of hay wagons or carts of Constable’s period – its sides are too low for carting hay and it appears more suited to carrying timber. It is also very close to Rubens’s chalk study of a hay cart for Return from the Harvest (Staatliche Museen, Berlin). However, Constable did not generally copy the work of other artists directly, preferring to pursue a way of painting ’founded on original observation of nature‘.

Constable himself did not call this picture The Hay Wain – it was a nickname given to it by his friend Archdeacon Fisher. When it was sent to the Royal Academy in 1821 with its given title ’Landscape: Noon‘, it was greeted favourably by reviewers. The Examiner declared that it ’approaches nearer to the actual look of rural nature than any modern landscape whatever‘. However, it did not sell. Constable was probably unaware at the time that two French visitors to England – the artist Géricault and the writer Nodier – had seen his painting in the Royal Academy. According to Delacroix, Géricault returned to France ’quite stunned‘ by Constable’s picture. Nodier suggested that French artists should similarly look to nature rather than relying on journeys to Rome for inspiration (by this he meant emulating the classicising landscapes, painted by artists such as Claude).

In 1824 Constable agreed to sell The Hay Wain, View on the Stour near Dedham and a small Yarmouth Jetty to the Anglo-French dealer Arrowsmith for £250. Arrowsmith sent them to the 1824 Paris Salon, where they caused a sensation. Constable commented: ’Think of the peaceful farm houses of Suffolk, forming a scene of exhibitions to amuse the gay and frivolous Parisians.' He was awarded a gold medal by the French king, Charles X, for his exhibits at the Salon, but chiefly for The Hay Wain. The medal is now in the National Gallery Archives. 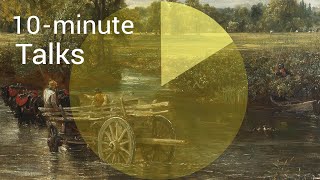 What made John Constable’s ‘The Hay Wain’ so radical for its time?

Cenotaph to the Memory of Sir Joshua Reynolds
John Constable
This painting depicts a memorial to the painter Sir Joshua Reynolds, built by Sir George Beaumont in the grounds of his home at Coleorton Hall, Leicestershire, in 1812. Beaumont planned to redesign his gardens to include other memorials dedicated to his friends and the people he admired. The poet...
Room 34
Salisbury Cathedral and Leadenhall from the River Avon
John Constable
Constable painted Salisbury Cathedral many times from different viewpoints. Some of these pictures were oil sketches made outdoors like this one, while others were large pictures intended for exhibition. This sketch was created during Constable’s six-week visit to Salisbury in the summer of 1820....
Room 45
Stratford Mill
John Constable
Stratford Mill was the second of the six monumental paintings of the Stour landscape Constable exhibited at the Royal Academy between 1819 and 1825, a group that includes The Hay Wain (National Gallery, London).Stratford Mill was a water-powered paper mill (now demolished) on the River Stour near...
Room 34
The Cornfield
John Constable
A boy has paused from the thirsty work of herding sheep at noon to lie flat on the bank of a pool and drink its cool water. This vision of a Suffolk lane in high summer was painted in January to March 1826 in Constable’s studio in London. The lane winding into the cornfield is based on Fen Lane,...
Room 34
Weymouth Bay: Bowleaze Cove and Jordon Hill
John Constable
This view is of Bowleaze Cove in Dorset looking west from Osmington. The Jordon stream trickles over the sand, with Furzy Cliff and Jordon Hill beyond. Thick clouds scud across the bright winter sky as the Downs slope to the sandy cove and sea. Constable suggests the waves rolling in to the beach...
Room 45