'The Lamentation over the Dead Christ'

The first of Auerbach’s versions of National Gallery paintings is also the most radical, a translation of a painting that is slightly over 12 inches high into a picture that stands at over six feet. On first looking it gives up few clues as to its subject. Even the artist now finds it hard to read. ‘I find it as difficult to read now as anybody else would, because it was done such a long time ago’, he said in 1995.

The monochrome paint surface was built up slowly. Technically, it is very different to Auerbach’s more recent work. Nowadays he scrapes previous attempts off the picture surface before each new session of work. In the 1950s and early 1960s he would simply allow the paint to build up, often to several inches in thickness, by working on top of the previously applied paint.

The geometrical grid imposed upon the composition is the abstract equivalent of the crosses and ladder in Rembrandt's 'The Lamentation over the Dead Christ'. Rigid and severe, it becomes a symbol of the torture and death of Christ and perhaps it might even be seen as carrying a specifically 20th-century echo of the barbed wire of a prison camp. The figure of Christ is differentiated from the other figures by being represented in a lighter tone, his face and twisted legs being carefully picked out in black. The other grieving figures sacrifice their individual identities and become fused together in a heap of ashen grey.

Auerbach explains his decision to work on this large scale: 'Rembrant's small painting seems to me to be so charged with feeling, with extraordinary detail of drama, with compositional invention, with sophisticated storytelling, that I couldn’t possibly have dreamt of making a small version of this vast idea on a small panel…it’s just such a highly charged little picture, it’s a miracle.’ 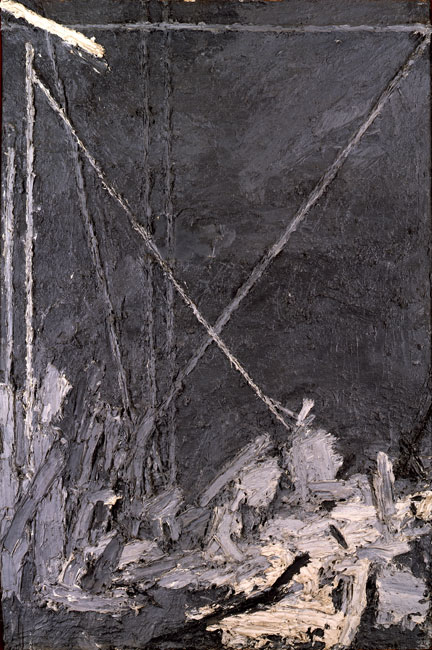