The large scale figure paintings of the 16th-century Venetians: Titian, Tintoretto, and Veronese, occur repeatedly in Auerbach’s drawings, as does work from the Baroque period, with Rubens, Rembrandt, and the Dutch landscape painters all favourites. From the 19th century, Degas and Seurat appear, both artists who themselves took their artistic bearings from the Old Masters. The greatest bias however, seems to be towards the English landscape painters: Constable, Gainsborough, and Turner.

‘I think I have a sort of penchant for the whole of English painting. It is as though it isn’t held up by a scaffolding of theory of philosophy…that it was arrived at empirically, out of sensation, as though there is a sort of fresh wind blowing through a room of English painting that is nowhere else in the national gallery. I find myself at home here.’ 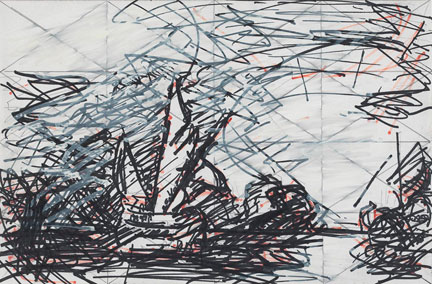