A man sits on a muscular horse, towering above a servant who passes him a helmet to complete his suit of armour. A Latin inscription on the tablet hanging from a tree identifies him as ‘King of Great Britain’ – this is Charles I, surveying his kingdom. Anthony van Dyck painted several portraits of Charles, but at over 3.5 metres high and nearly 3 metres wide, this is the largest.

Other details communicate the King’s status: the gold chain around his neck shows that he’s a member of an elite society called the Order of the Garter, while the baton of command he holds signals his senior military rank. In the other hand he grasps the reins to his powerful horse – a symbol of the control he has over his state, something he was to lose only a few years later during the British Civil Wars. In January 1649, he was put on trial for treason, and executed.

Mounted on a large horse, King Charles I surveys the landscape of England, one of his kingdoms. He is dressed in fine armour, and his hair flows loosely over his shoulders, although this, and the expensive pearl earring he wears, will be hidden when he puts on the helmet that his servant is passing to him. He is glamorous, but also ready for battle.

Though Charles does not wear a crown – a clear symbol of royalty – other objects point to his status: the baton of command he holds signals his senior military rank, and the gold chain around his neck, commonly called the ‘Little George’, shows that he’s a member of an elite society called the Order of the Garter. The horse is equally finely dressed, with gold decoration and elegantly styled hair which, like the King’s, blows lightly in the breeze. Impressively muscular, it is suitable for carrying such an important passenger, who is raised to the very centre of the picture. In one hand, Charles I calmly holds the reins to the powerful animal, demonstrating his greater strength: the power to command his state. He was to lose this control to civil war a few years after this painting was made, and was eventually put on trial for tyranny and treason, and publicly executed by beheading.

As the King’s official painter, Anthony van Dyck painted several portraits of Charles I, and while this is the largest, it was not the first to show him with a horse. In one portrait, the King sits proudly on a horse under a stately arch, attended to by his riding master; in another, he and a servant stand by his animal in a landscape, having paused during a hunt. Equestrian portraits like these have in fact been a popular way of displaying an individual’s power and grandeur for centuries, and one of the most famous early examples is a bronze statue of the Emperor Marcus Aurelius on horseback (Capitoline Museums, Rome).

A portrait of Charles V on a horse by Titian – a favourite artist of both Van Dyck and Charles I – probably inspired the format of this picture. Other equestrian portraits then in the Royal Collection may also have been influential, as well as ancient texts which describe similar scenes. Van Dyck has, however, also painted the horse’s legs in an elegant position, which would have been recognised at the time as a movement from the fashionable sport of horse dancing (called dressage).

A Latin inscription on the tablet hanging from the tree reads: CAROLVS./ REX MAGNAE/ BRITANIAE (‘Charles I, King of Great Britain’). Charles I’s father, James I, had been the first ruler to declare himself ‘King of Great Britain’, even though England and Scotland were not legally joined into the Kingdom of Great Britain under the same monarch until the Acts of Union of 1706–7.

Equestrian Portrait of Charles I 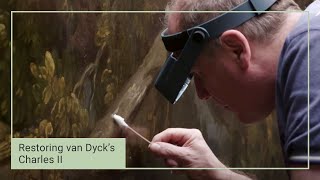 Art restoration of one of our largest paintings: Cleaning Van Dyck's '...

How do you restore a painting that is over 12 feet tall and 9 feet wide? Over the last year, our Conservation and Scientific teams have been restoring one of our largest paintings, Anthony van Dyck's 'Equestrian Portrait of Charles I'. Watch along as...