The presence of an exceptionally free and creative underdrawing - the drawing made by the artist before he began to paint - was revealed by infrared reflectography, a late 20th-century scientific technique that no earlier copyist could anticipate.

Much of the underdrawing in The Madonna of the Pinks is typical of Raphael's style. It includes features familiar from many drawings, cartoons and other underdrawings by him: for example, broad arcs to lay in the principal forms, smaller arcs denoting the knuckles of the hands, hatching to denote areas of shadow, hook-ended marks to indicate drapery folds. 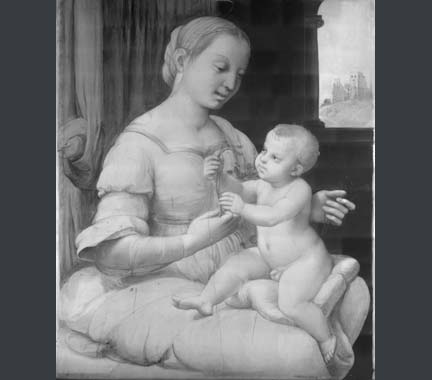 Infrared reflectogram of Raphael, The Madonna of the Pinks

Before taking up his brush, Raphael drew directly onto the primer. He may first have used a cartoon to transfer his design to the panel (as was his usual practice) but if he did, no trace of it has been detected. Either way, he went on to elaborate the design with considerable freedom. The drawing closely resembles his cartoons at this period and also the freehand elements of the underdrawing in the Garvagh Madonna.

Microscopic investigation indicates that the underdrawing was executed in metalpoint, a medium frequently used by Raphael.

Next: Changes of mind