The revealed underdrawing shows that Raphael changed his mind several times during the execution of this exquisite painting. In particular, he radically rethought the costume. Here you can see that he first envisaged a completely different neckline for the Madonna. Originally it plunged to reveal more of her bosom, and he first thought of painting a little button or piece of jewellery at the shoulder. 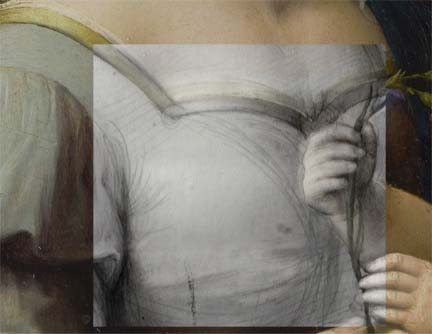 Detail from Raphael, The Madonna of the Pinks, showing changes to the underdrawing

Changes to the composition are a well-recognised part of the creative process. These changes would not be present in copies because the copyists would already be working from published images of the original. Also, no copyist before the 20th-century (this painting is recorded well before) could have guessed that the underdrawing would one day be seen and used as a vital clue in identifying authenticity by comparison with other works by the artist.

No copyist, not even the gifted 19th-century copyist Vincenzo Camuccini who owned the picture, would have dreamed of including variations to the composition of a published image, already well-known through prints, especially if they wished to pass it off as the lost original.

Since there are also such strong stylistic connections with other Raphael works, the drawing can only be by him.

Raphael changed his mind as he painted. There is a purple paint layer (invisible except by microscopic investigation) underneath the green curtain, which reveals that Raphael changed his mind about the colour after beginning the painting. Another change can be seen in the landscape visible through the window where the line of the hill passes through the distant architecture. 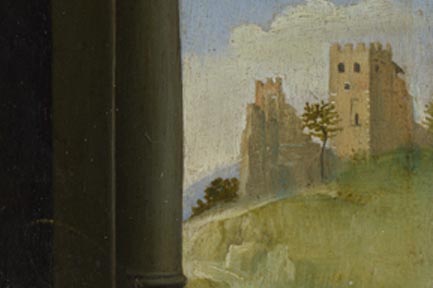 Dr Nicholas Penny's observation of this feature was one of the first clues that led to the painting's rediscovery. The presence of such changes in the course of a painting's execution are part of an original creative process and would not be present in a copy. A copyist would be unaware of the hidden changes beneath the paint layer.

Next: Paints and pigments