The pigments - the colours used to make up the paints - are all characteristic of paintings in Florence and Umbria in the first years of the 16th century, where and when Raphael was working. Later copyists would not have been able to obtain many of the pigments used by Raphael, and would have had to employ later pigments, unknown in Renaissance Italy. They have been identified using microscopic investigation. 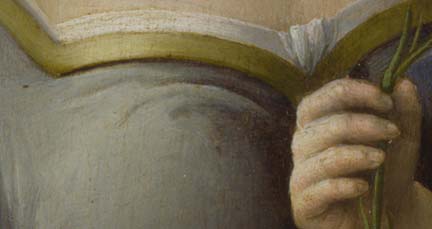 The Madonna of the Pinks contains mineral azurite in the pale mauve grey of the bodice, which by the early 19th century was unknown as a Renaissance pigment, and indeed was not available in Europe at this time. Other pigments include lead-tin yellow which was only rediscovered in 1941, and green malachite, a pigment rarely found after the 16th century. 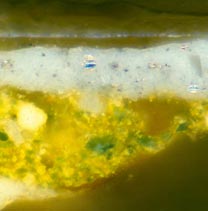 Highly magnified cross-section of paint from Raphael, The Ansidei Madonna, 1505

Most importantly, the picture contains a highly unusual dark grey pigment with a shiny, sparkling appearance. This material has been identified recently as powdered metallic bismuth, which is present in other works by Raphael.

The use of bismuth as a pigment is confined, so far as is known, to early 16th-century central Italian painting. Its existence has only been discovered in the last 10 years.